With over 13,000 islands, Indonesia is the world’s largest island country located in Southeast Asia. The region that is now modern-day Indonesia has been an important hub of trade since at least the 7th century. The flourishing trade supported the growth of powerful Hindu and Buddhist kingdoms in the archipelago. In the later centuries, Muslim traders and Sufi scholars started to arrive in the region and brought their religion with them. Christianity arrived with the European traders, explorers, and missionaries during the Age of Discovery. Soon, Indonesia became a Dutch colony and remained so for a long period of time. Other European powers including the British, Portuguese and the French also fought for control of the islands in the archipelago. They fought each other to monopolize the Spice Islands trade. Finally, Indonesia achieved its independence from colonial rule in 1949 following a diplomatic and armed conflict with the Netherlands.

History And Design Of The Flag Of Indonesia 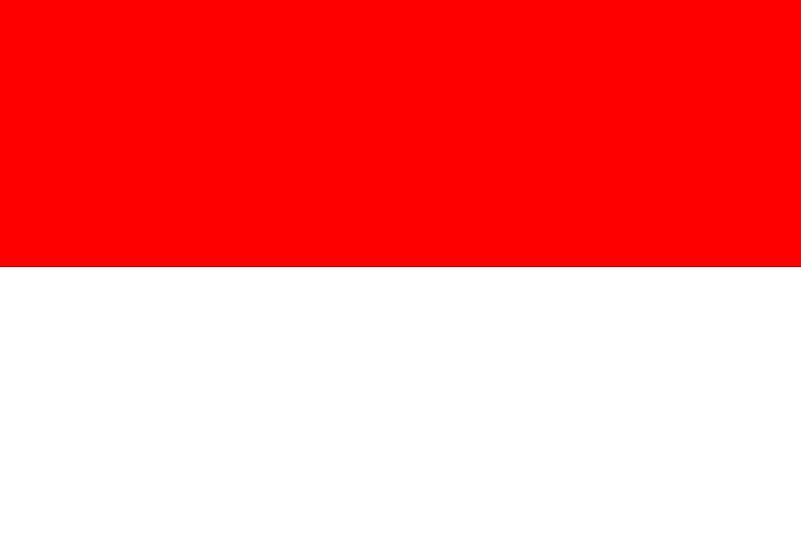 The national flag of the country has a simple design. It is a bicolor of two horizontal bands. The top band is red in color while the bottom one is white. The bands are of equal size. The flag was first formally introduced in the public on August 17, 1945. The Indonesian Declaration of Independence was read out on this date followed by the hoisting of the flag. The day marked the beginning of the diplomatic and armed resistance of the Indonesian National Revolution against the Dutch colonial rule. It finally led to independence in 1949.

Indonesia’s flag is graphically identical to the national flag of Monaco. The only difference between the two flags is in the ratio of the dimensions. Poland’s flag also is similar in appearance but has the colors in the reverse direction with white on top and red on the bottom.

Symbolic Meaning Of The Colors Used In The Flag

There are several beliefs as to the symbolic meanings of the red and white colors used in Indonesia’s flag. According to some, the colors are derived from the Majapahit Empire’s banner. It was a thalassocracy based on the Indonesian island of Java and ruled in the region from 1293 to 1500. However, records of the existence of the red and white pataka (an elongated flag hoisted on a bamboo pole) exist even prior to the rule of the Majapahit Empire. According to others, the red and white colors of the Indonesian flag symbolize Mother Earth and Father Sky, respectively, as per the Austronesian mythology. The second belief is more widespread in the Austronesian region and many flags used in the region have these colors.

This page was last updated on September 24, 2018.
By Oishimaya Sen Nag