The cheetah is a prominent cat family member that belongs to the subfamily Felinae and  is found across Africa and some parts of Iran. The cheetah prefers grassland habitats where it has enough space to go after its prey without any obstacles. Widely regarded as the fastest animal on land, cheetahs are divided into four subspecies; the Southeast African cheetah, the Northeast African cheetah, the Northwest African cheetah, and the rare Asiatic cheetah. The cat was first described by Johann von Schreiber in 1775. African and Asiatic cheetahs diverged about 67,000 years ago with each evolving differently. Conditions have been much harsher on the Asiatic cheetahs, which have seen their numbers dwindle considerably. The differences between these two are hard to spot, but they do exist, and they include the following.

The African cheetah is spread out across Africa from Northwest Africa, East Africa, and Southern Africa. With a bigger territory, the African cheetahs have the highest populations compared to their Asiatic counterparts. On the other hand, Asiatic Cheetahs are only found in a small region between Iran and Pakistan. Asiatic cheetahs once roamed the whole expanse of the central Asian continent from India to Afghanistan and Pakistan, but with their numbers reduced, it is hard for them to be sighted outside Iran.

The Asiatic cheetah is slightly smaller and slender than the African cheetah. The neck is much smaller and longer. Their legs are also slender, which has led many to believe that they could be much faster than their African cousins. However, no data is available to confirm. An Asiatic cheetah adult grows to about 53 inches in length with a 33-inch tail and can weigh up to 119 pounds. African cheetahs, on the other hand, have a slightly bigger build with sturdier legs and necks. Their heads are also bigger compared side by side with the Asiatic cheetahs. An adult African cheetah can reach 84 inches in length and can weigh up to 159 pounds. The Asiatic cheetah has a buff to light fawn color bordering on pale yellow skin, and it has more fur on the body, especially under the belly and the back of the neck. The African cheetah has a light brown to golden brown fur color that is thicker than the Asiatic ones. The spots are more pronounced on the face and are more densely distributed on the body compared to Asiatic cheetahs.

The African cheetah is the only one that has been recorded running at its full sprint. Asiatic cheetahs are believed to have the same speeds as African Cheetahs. However, no data is available to back this claim. The reason for the assertion is that the mountainous terrain that the Asiatic cheetahs have to contend with, does not provide enough space for them to go all out, a luxury only accorded to the African cheetahs in their flat savannah terrains.

A century ago, there were more than 100,000 cheetahs that roamed the African and Asian continent. That number has since been decimated to extremely low figures. The African cheetah has superior numbers as it is estimated that there are about 10,000 of them left in the African wild at the moment. The Asiatic cheetah, on the other hand, is listed as a critically endangered animal, there are less than 100 individuals left in the wild with most of them in Iran.

Asiatic cheetahs mostly prey on medium-sized prey like goitered gazelle, wild sheep and goats, cape hares, and chinkara. The Asiatic cheetah’s habitat is not as diverse as the African continent, which limits food sources for Asiatic cheetah. The African cheetah has a more diversified diet option compared to its Asian cousin. Africa is home to over 25 species of herbivores, with most of them within the cheetah’s diet range. 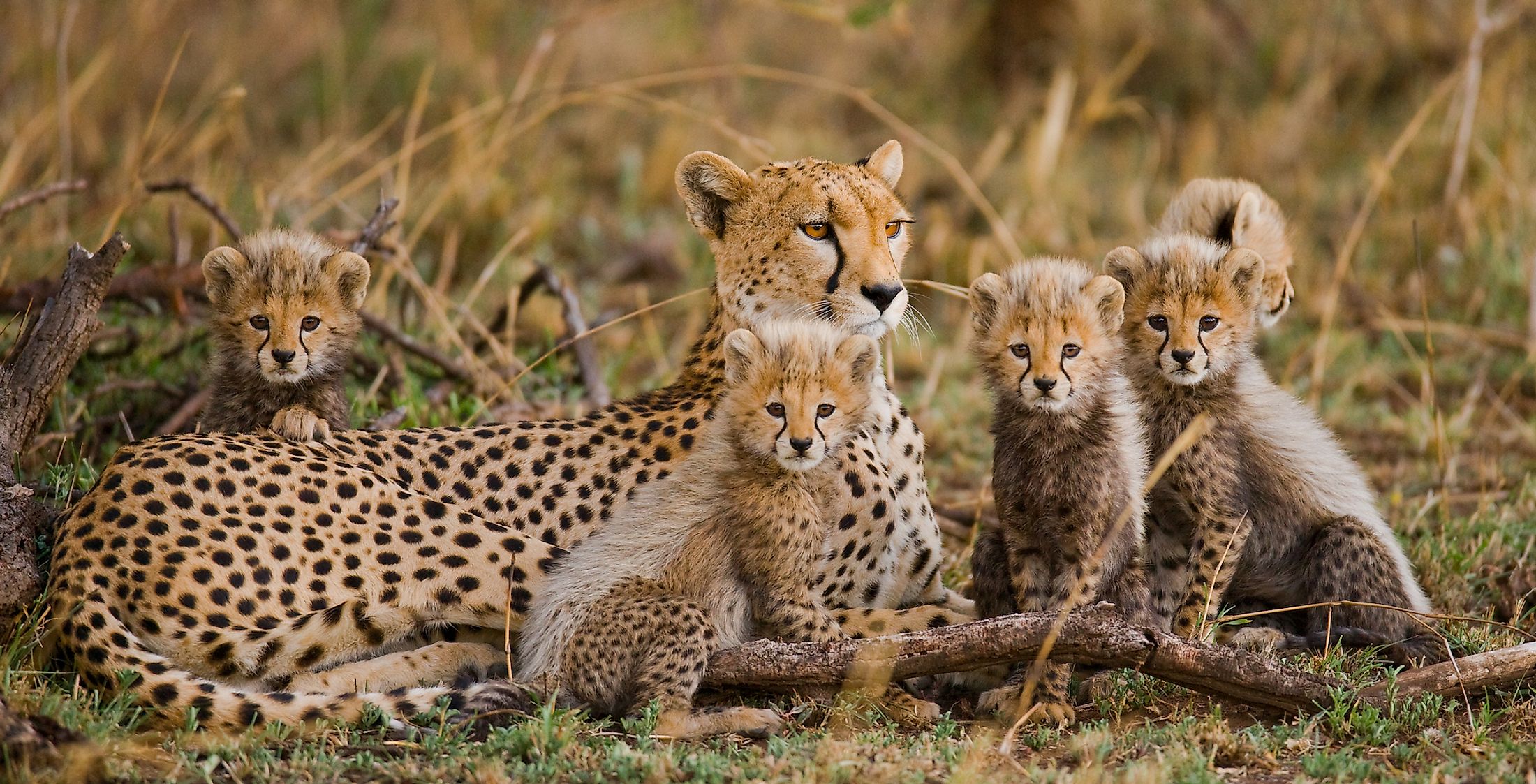 The Asiatic cheetah is facing extinction, and efforts to save it are becoming exceedingly harder every day. Loss of habitat is the leading cause behind the dwindling numbers of cheetahs in the wild. The historical range of the cheetahs has reduced from 13 million square miles in the 1900s to just 280,000 square miles today. In Iran, for instance, the area with the largest population of Asiatic cheetahs is being destroyed by coal mines that keep popping up to excavate the rich iron ores in the region with little regard to the rare cheetahs. Human-wildlife conflicts caused by the encroachment into areas that have been hunting territories for cheetahs have caused suffering to the cats. As their natural prey is reduced in the wild, cheetahs are turning their attention towards livestock, and in retaliation, they are killed by humans.

Illegal wildlife trade is another cause of concern for the cheetah population, and many are snatched from the wild and sold to captivity as pets where most live in less than ideal conditions. With just four subspecies left, the cheetah genetic pool lacks the diversity that would make it adapt better to prevailing conditions. The lack of diversity has weakened the cheetah making it vulnerable to diseases that reduce their numbers. Cheetah fur is also on high demand in the black market, and their beautiful fur is used to make expensive apparel like coats that fetch high prices. The demand for these coats is driving the hunting of cheetahs, especially in Africa. Climate change is affecting the changes in seasons, making them more irregular every year, and these changes negatively impact cheetahs as they disrupt breeding seasons. Tourists also, who are eager to see the cheetah hunt, disturb them from making successful hunts, and endangering the lives of the cubs from starvation.

With less than 100 Asiatic cheetahs left, some Iranian conservationists have moved with urgency to save the rare cat from their impending extinction. In 2001, in conjunction with the UN, the Iranian government launched a project to save the cheetah by setting up a 23,000 square mile park with trained wardens. Their last-ditch efforts to save the cat, which should have come much earlier to give them a better chance. In Namibia, a special Cheetah Conservation Fund was set up in 1990 to raise funds to save cheetahs in the southern part of Africa, most of the funds go into research and the education of people equipping them with basic conservation skills that they can use to help save the beloved cats. Cheetahs do not thrive well in an enclosed environment, but they need to restore their populations in the wild has made the researcher carry out a captive breeding program.

There are various orphanages and cheetah sanctuaries around the world, like the Nairobi Animal Orphanage that gives refuge to orphaned cheetahs and other cats as well. Namibia runs a series of programs in cheetah sanctuaries where young people are invited to volunteer in taking care of cheetahs inside the parks. The chance to work with cheetahs in their spare time leaves a positive outlook on conservation in young minds who will later take over the role of conserving endangered species. In Iran, cheetahs reside in five protected areas that include Dar-e Anjir Wildlife Refuge, Kavir National Park, Naybandan Wildlife Reserve, Touran National Park, and Kavir National Park. Breeding programs are also run with the parks with the hope of repopulating the wild with cheetahs. Other notable cheetah sanctuaries in Africa are Ngorongoro Conservation park in Tanzania, Daniell Cheetah Zoo in South Africa, and Ashia Cheetah Sanctuary in South Africa.

Political instability and wars in Iran have, for long, scuttered the little progress that cheetah conservationists make, many have been jailed on the suspicions of being spies, and their projects closed down. Cheetahs also do thrive well in captivity like other cats. Cheetahs are the smallest of the African cats, they are subjected to fierce competition for food against lions and leopards in the parks, and they end up starving, this ends up defeating the whole purpose of keeping them in sanctuaries. Lack of funds, commitment, and support from the government also add the burden on private organizations that are unable to shoulder all the responsibilities on their own, which in turn diminishes survival chances for the cheetahs. The cost and availability of the necessary technology needed to monitor the cheetahs round the clock properly are too high, working without proper tools makes the work risky for wardens and other personnel who are directly involved with the cheetahs. Natural challenges like droughts and diseases are affecting the conservation work as well as raising the budget costs. With resources already stretched to the limit, it becomes cheaper to release some of the cheetahs to the wild even when they are not ready and hope that most of them find a way to survive.

This page was last updated on February 14, 2020.
By Benjamin Elisha Sawe

What Are The Differences Between Asiatic Cheetahs And African Cheetahs?