The European country of Italy is located on a peninsula jutting out into the Mediterranean Sea, and is well known for its cuisine, its rich culture, its natural beauty, and its ancient marvels. Having been the home to the mighty Roman Empire, the location of the Papacy and the starting point for the Renaissance, Italy has a rich and storied history. Italy currently has the most United Nations Educational, Scientific and Cultural Organization (UNESCO) World Heritage Sites of any country in the world with a total of 51 such locations, 47 of which are cultural sites and 4 of which are natural sites. 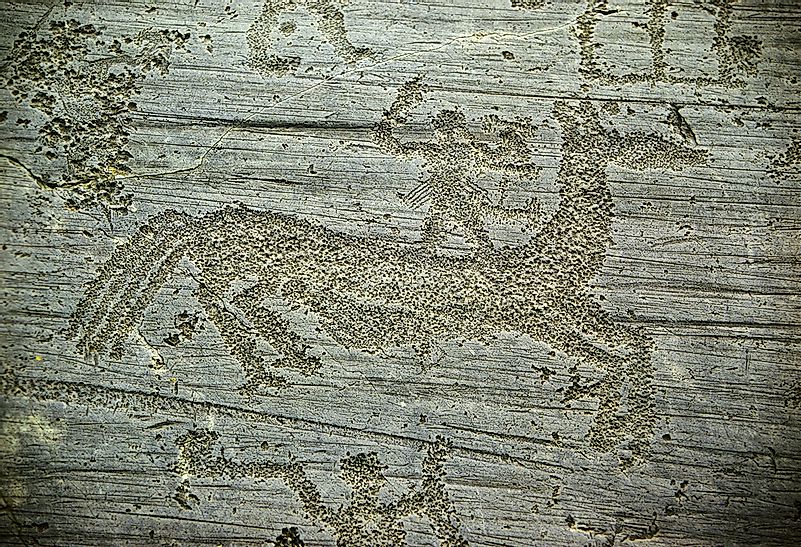 The Valcamonica Rock Drawings were the first site in Italy to be designated as a UNESCO World Heritage Site, being inscribed as such back in 1979. The Valcamonica Rock Drawings are located in the Province of Brescia, in the Lombardy Region of northern Italy. The site is located in the mountainous area of Lombardy and is the location of one of Earth's greatest collections of known prehistoric petroglyphs (rock drawings). The Valcamonica Rock Drawings site has more than 140,000 different symbols and figures that were carved into the rock on both sides of the entire valley over an 8,000 year span. The symbols and figures at the site range from themes of agriculture, animals, duels, magic, navigation, war and also geometric-symbolic figures. This site is important today as it represents a remarkable emblematic documentation of the prehistoric customs and mentality of humans from an earlier era. It is also important to the study of prehistory, ethnology and sociology. 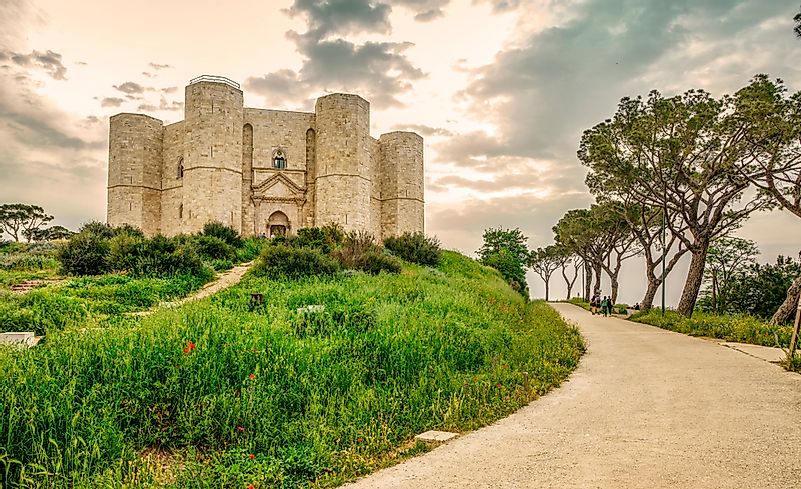 The Castel del Monte was designated as a UNESCO World Heritage Site in 1996, and is located in the Province of Bari, in the Puglia Region of southern Italy. The Castel del Monte is located on a rocky hill that rises above the rest of the surrounding area, sitting near the Adriatic Sea. The castle was built by Holy Roman Emperor Frederick II (1194-1250) and was completed in 1240. The castle was a unique piece of architecture for the medieval period as it had a perfect octagonal shape, with octagonal towers at each angle, and its layout was built using mathematical and astronomical precision to reflect Emperor Frederick II's vision for the building. The architecture of the castle is also noted for combining a blend of elements from the classical antiquity of the Greeks and Romans, the northern European Cistercian Gothic and the Islamic Orient. This was a reflection of the diverse court of scholars that the emperor had brought on from throughout the Mediterranean region. Today the Castel del Monte stands as a symbol of Emperor Frederick II, as a combination of various elements from the great Mediterranean civilizations and as a distinct piece of medieval military architecture. 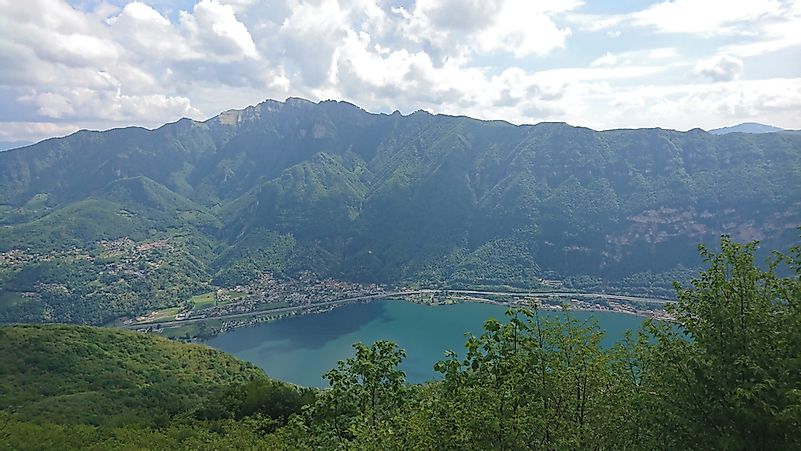 Monte San Giorgio was designated as a UNESCO World Heritage Site in 2003, and is one of Italy's four UNESCO World Heritage Sites in the Natural category. Monte San Giorgio is located on the border of Switzerland and Italy, but the Italian region of the site in the Province of Varese in the Lombardy Region was not added until 2010 when there was an extension added to the site. Monte San Giorgio is a pyramid-shaped mountain that is covered in woods and sits right next to Lake Lugano. This site serves as the best known record in marine life during the Triassic Period of between 230 million and 245 million years ago. This fossil sequence records the life that occurred in a tropical lagoon environment, including ammonites, bivalves, crustaceans, echinoderms, and fish. The site also has some land-based fossils from insects, reptiles and plants due to the lagoon's location near land. Today the Monte San Giorgio site stands as the main point of reference for any future discoveries of marine Triassic Period remains. 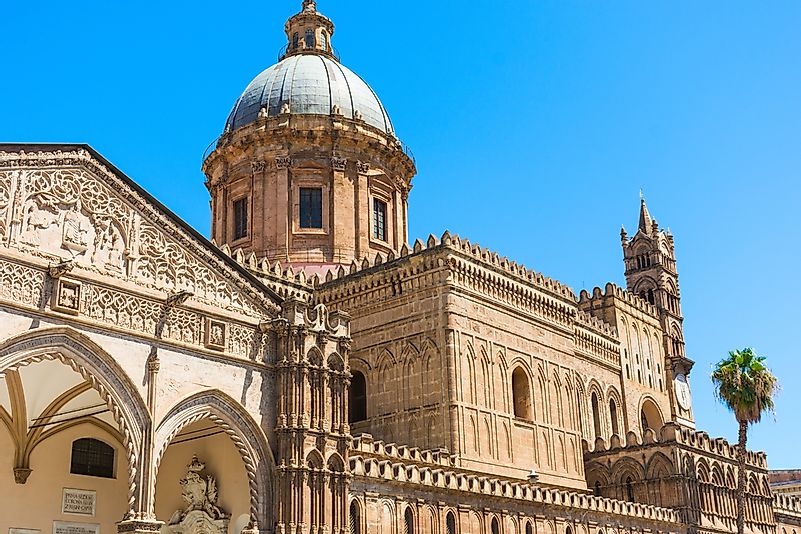 The Cathedral Churches of Cefalú and Monreale and the Arab and Norman sites in Palermo became the newest additions to the UNESCO World Heritage Sites in Italy, having been inscribed upon the list in 2015. The site is located in the Province of Palermo, in the Sicily Region of southern Italy. The sites of Cefalú's and Monreale's Cathedral Churches and Arab-Norman Palermo is made up of three cathedrals, three churches, two palaces and a bridge from the Norman Kingdom of Sicily, which was in power from 1130 until 1194. The three cathedrals are Palermo Cathedral, Monreale Cathedral and Cefalù Cathedral. The three churches are the Church of Santa Maria dell’Ammiraglio, the Church of San Cataldo and the Church of San Giovanni degli Eremiti. The two palaces are the Royal Palace and Palatine Chapel and the Zisa Palace, while the bridge is called the Admiral’s Bridge. These nine sites together represent the social-cultural syncretism between Western, Islamic, and Byzantine cultures in terms of architecture, structures, materials, and artistic decoration that started on the island of Sicily. These combined sites are important today as the represent the coexistent of various cultures and religions under the Norman Kingdom of Sicily, as well as an interchange of architectural elements that were shared between these different groups.

The Valcamonica Rock Drawings are vulnerable to a number of different factors, as the engraved rock art is exposed to changes in atmosphere and climate, as well as the potential damage from pollution or direct human interference from construction activities nearby. The site however has managed to keep a high level of authenticity due to the constant monitoring and restoration of the site. The Castel del Monte has had its integrity protected since the site had not had any significant structural alteration, however the marble and mosaic interior decorative elements have decayed, with many of them having to be removed. The Monte San Giorgio meets the integrity requirements for a fossil site and has accessible fossil rock exposures. There has been a strong collaboration between Switzerland and Italy to protect the site, the landscape around the site and to enforced existing management procedures and laws governing the site. The Cefalú's and Monreale's Cathedral Churches and Arab-Norman Palermo site haven bee given the given the highest level of protection established by national legislation of the Italian government under the 2004 Italian Code of the Cultural and Landscape Heritage. None of the properties at the site suffer from any adverse effects due to human development or neglect from not being monitored. All of the aspects of the site maintain good integrity and authenticity.

What UNESCO World Heritage Sites are in Italy?

Italy currently has the most United Nations Educational, Scientific and Cultural Organization (UNESCO) World Heritage Sites of any country in the world with a total of 51 such locations, 47 of which are cultural sites and 4 of which are natural sites.