Bees are flying insects that contribute to the survival of many living beings including humans. They are closely associated with ants and wasps and are popular for their production of beeswax and honey. One of the significant ways in which honey bees affect livelihoods is their ability to pollinate billions of plants every year. In the US alone, honey bees are responsible for the pollination of $15 billion worth of crops. Pollination is a critical process in plants whereby pollen is transferred from the male part of the plant to the female part resulting in fertilization. Consequently, plants are capable of sexual reproduction that produces the next generation of crops. Plants are part of the food chain resulting in it being a source of food for herbivores. They are also responsible for the purification of the atmosphere as they take in carbon dioxide from the atmosphere and release oxygen to it. Bees, through pollination, ensure there is continuous multiplication of the plants pollinated by them. Besides pollination, honey bees are important to the world’s population and ecosystem as they provide food security, sustainable farming and income, and biodiversity. They are also used by environmentalists to assess environmental health. In view of this, climate change does affect bees in multiple ways as discussed here. 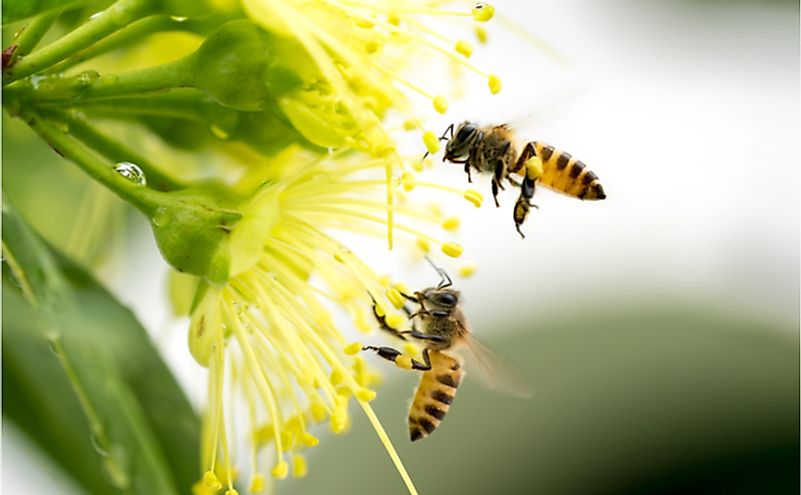 How Climate Change Affects The Bees?

Altering The Scents Of Plants

Bees depend on both visual signals and olfactory cues to search for their food which is plant nectar. Visual signals represent the color of the plants and the number of flowers per plant. On the other hand, the olfactory cues are the floral scents that are unique to each flower and plant. Bees have a special ability to store these cues in their memory and utilize them in their search for pollen for food. In recent times, climate change has resulted in plants changing their scents. The reason for this is that changes in the environmental conditions (such as lack of water or extreme heat) result in plants being stressed. Consequently, they release defensive compounds to protect them from harm. It is these compounds that alter the scents of these plants making it difficult for bees to trace their ways to plants for food. The lack of food results in the loss of bee colonies.

In their role as pollinators, timing is a crucial factor for bees. The time of flowering and hatching must coincide for successful pollination to take place. Naturally, bees usually come out of winter hibernation at exactly the same time when flowers begin to bloom. Climate change has resulted in the mismatch between the period when flowers produce pollen and when the bees are ready to feed on the pollen. This loss of synchronicity with the flowering plants, because the bees are unable to hatch earlier, has dire consequences to the ecosystem. It results in a decrease in seed production in plants that impairs plant reproduction. Furthermore, the mismatch causes food shortages for the animal and human population and the population decline of bees as they are unable to get their food from the plants.

Studies indicate that bee territories have shrunk by nearly 200 miles in North America and Europe. Consequently, the habitat ranges for the honey bees have become smaller and they are challenged as to where they should set their hives. Unlike other insects like butterflies that easily adapt to new habitat ranges in cases such as the current climate change, some bee species like bumblebees rarely shift their habitat. Thus, habitat loss may eventually result in the extinction of some species of bees.

An Increase In Susceptibility To Diseases

Bees are vulnerable to some species of gut and mite parasites that thrive in warm temperatures. One of the glaring effects of climate change is the increase in temperatures and less cold seasons. These high temperatures mean that bees are at greater risk of diseases and parasites now than they were before due to climate change.

Increased habitat loss has led to native bees experiencing a greater threat to extinction than ever before. The destruction of the bees’ habitat is caused by the current heightened global warming levels. Examples of the most threatened native bee species include yellow carpet solitary bee, sunflower leaf-cutting bee, wild sweet potato bee, and Gulf coast solitary bee.

How To Conserve Bee Colonies?

The dire effects of climate change on the survival of the bees discussed above reveal the urgent need to conserve these important insects. The first step is to protect and manage bee-friendly habitats like coastal areas, grasslands, brownfield sites, farmlands, saltmarshes, and sea walls among others. Engaging in the protection of these habitats will result in increased populations of the bees and in turn higher levels of pollination leading to minimized food shortage. Another method that may be applied to protect bee habitats is by implementing environmental legislation intended to preserve areas where bees live.Secondly, people, governments, and non-governmental organizations can conserve bee colonies by planting as many trees as they can to reverse deforestation. Bees prefer building their hives on trees and thus lack of trees affects their lives in a great way. On the other hand, individuals can grow bee-friendly havens to attract bees by planting wildflowers and leaving the grass to grow. Doing so enables bees that are wandering around for lack of a home to find one. Thirdly, farmers need to avoid harmful pesticides, herbicides, and fertilizers which are harmful to the bees’ lives and may keep bees away from plants. One of the most harmful chemicals to bees are those of the neonicotinoid family. Instead, farmers should make use of beneficial insects such as ladybugs and praying mantises on their farms. Essentially, farmers should shift their farming methods from the current prevalent conventional agriculture to sustainable farming that utilize organic fertilizers and not the inorganic fertilizers that are harmful to the bees.

This page was last updated on December 6, 2019.
By Sharon Omondi