Salmon refers to different species of ray-finned fish, which belong to the family of Salmonidae. They inhabit main tributaries in the Pacific and Atlantic oceans. Some have been introduced in the new environments which they have colonized like South America’s Patagonia region and North America’s Great Lakes. Salmons are anadromous, meaning that they migrate up the freshwater from the oceans where they reproduce and migrate back to the oceans again. Every year, the Northwestern Pacific region, experiences one of the greatest phenomena in nature, the Salmon run. The earth’s magnetic field and their instincts possibly guide the salmons to return to the place where they were born. The reason why salmons do this is not fully understood. There are several places to witness salmon run on their epic journey from the oceans upstream to spawn.

Ballard Locks, also known as the Hiram M. Chittenden Locks, is located on the ship canal in Seattle. It is one of the places to observe the salmon run. The best place to watch them is on the 18th step through the windows under the water. There are 21 steps of fish ladders which have been constructed to assist the salmons on their journey to cross the locks. The best time to view the salmons in this location is particularly in September and early October. There are guided tours of the locks and information on salmons and their ladders. Tours run from 1:45 pm to 3:45 pm on weekdays and on weekends tours are allowed at 11:45 am, 1:45 pm, and 3:45 pm. Special tours of the area for groups can be arranged. 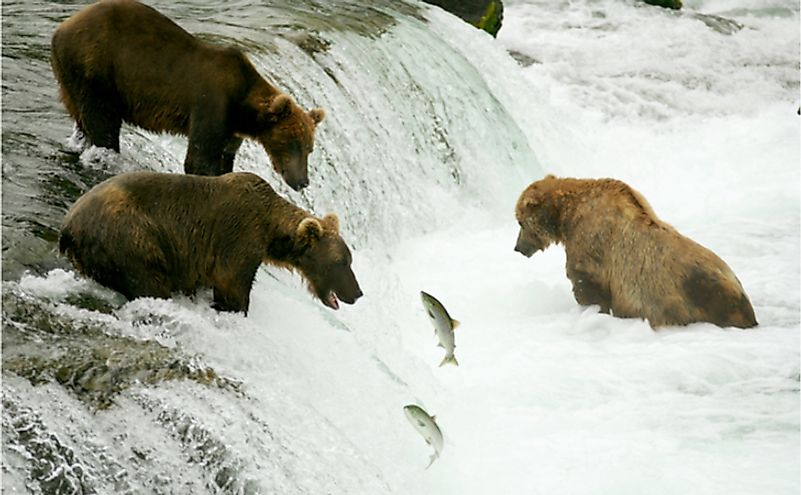 The Cedar River is found in the state of Washington in the US that empties its waters into Lake Washington on the southern end of the lake. The river drains into Puget Sound through Lake Washington ship canal and Lake Washington. The common species of salmon found in this river are mainly Sockeye and Chinook. Their migration can be witnessed beginning from mid-September until early November. Naturalists remain posted in the area, particularly at Landsburg Park, from 11:00 am through 4:00 pm. During this period, visitors can see the brightly colored sockeye salmons in the river and can learn from experts about their annual migration from the Pacific. Visitors can learn how salmons pass through the dam as well as the water supply in the Seattle area during a 40-minute walk to Landsburg Dam. The Cedar River is the main river in Lake Washington watershed. It is a fertile spawning ground for the chinook salmons and other types of fish in the southern part of Lake Washington.

Goldstream River is Located in the northwestern part of Victoria on South Vancouver Island in British Columbia, Canada. The name of the river is derived from the Gold Rush of the 1860s, and initially, it was known as Gold Stream. It is part of the Goldstream Park, and salmon run could be witnessed for about nine weeks in mid-October. Each autumn salmons migrate from northwest pacific to spawn on Goldstream River. Some of the salmons in the river include Chum, which are typically abundant, and others include Chinook and Coho salmons. The park has an information center for visitors who want to learn more about the salmon run and other wildlife. 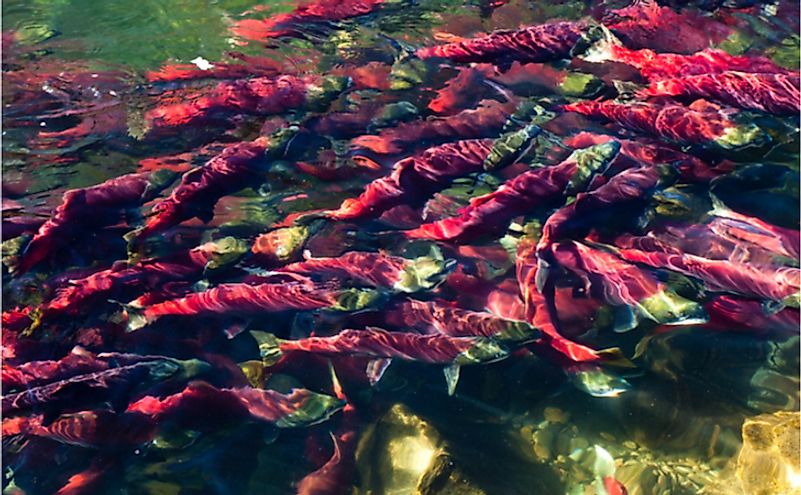 Adams River is found in British Columbia in Canada originating from the Monashee Mountains and empties its waters to Adams Lake. The river is one of the largest breeding grounds of salmons in North America. Salmon runs take place in mid-October, and millions of them converge at the mouth of the river. They begin the journey from the Pacific Ocean and enter into Fraser River and upward to Thompson River their spawning grounds. Sockeye salmons spend three years in the open Pacific Ocean and flow with the current to the Aleutian Islands and Alaska. The salmons complete a round trip covering more than 2,500 miles. Their trip upstream includes scaling the swift water and rapids on Fraser Canyon, and it takes them only 17 days. During this time they do not eat anything, relying on the body fat reserves which have been stored following the heavy feeding at the bottom of the Strait of Georgia during late summer. At this point, the color of salmons change to a red hue, and the males develop a hooked mouth and large hump on the back. Every year salmon runs are witnessed along the Adams River, but every fourth year the numbers of salmons increase significantly and it has been referred to as the dominant year. The most recent dominant year was 2018. 2010 is considered the year with the highest number of salmons migrating upstream ever witnessed since 1913. It is estimated that about 34 million fish took part in that journey in 2012.

Other Places To See Salmon Runs

Mission Creek in Kelowna in British Columbia, Canada is also an important location to witness the salmon run. Capilano River in North Vancouver, Sammamish River in Redmond, Washington, Bear Creek near Redmond, and Chuckanut Creek in Bellingham are a few other places to witness the phenomena. There are also numerous spots to see salmons in Alaska such as the Arched Bridge, which is a great salmon viewing site in Sitka, Salmon viewing spot at Grouse Creek, and Anchorage Coastal Wildlife Refuge among others.

This page was last updated on September 19, 2019.
By Benjamin Elisha Sawe