Orangutans refer to red-haired apes that are native to the islands of Borneo and Sumatra which are located in Southeast Asia. They inhabit tropical forests and are said to be among the animals with the closest relations to humans. Some interesting facts about Orangutans are as follows;

1. Orangutans are commonly referred to as the “human of the forest.”

These red-haired apes are thought to have a DNA that is 97% similar to that of human beings. In fact, the name orangutan is derived from two Malay words “orang” and “hutan” which means “human of the forest.” There are three species of the Orangutans namely the Bornean, the Sumatran, and the Tapanuli. Another similarity to humans is that they are very intelligent and can use tools.

2. Female Orangutans give birth once in every eight years

Female Orangutans are known to have the longest birth interval of any land mammal. They give birth once every eight years to one or two infants whom they live with for 6-7 years after birth. During this time, Orangutans form special mother-child bonds whereby the infants get to learn everything from their mothers including what to eat and what not to eat. Usually, females start reproducing at age 17 whereas the males become sexually active at age 15.

3. Orangutans are one of the noisiest creatures on earth

Orangutan sounds can be heard as far as miles away. The sounds that they make are known as bellows, cries, or howls. These noises are often made by the males who intend to spell out their territories to avoid any invasion by the others.

4. The lifespan of the Orangutans is 30-40 years in the wild

Orangutans that live in the wild forests have a lifespan of 30-40 years. However, those that live in captivity may live as long as 50-60 years. Thus, Orangutans have a relatively long lifespan. 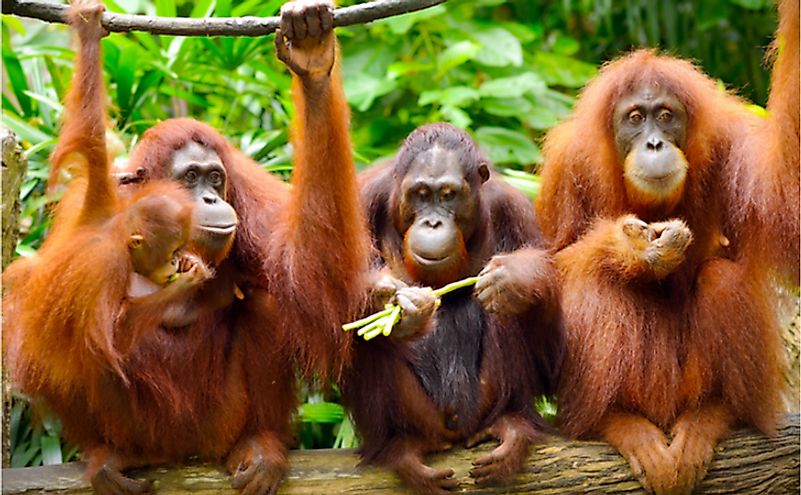 5. Orangutans are an endangered species today

According to the IUCN Red List, the Orangutans are critically endangered species. More specifically, there are 100,000 Bornean species, fewer than 14,000 Sumatrans, and less than 800 Tapanuli species left on earth. Some of the threats to the survival of the Orangutans include deforestation, illegal hunting, and most recently forest fires.

Orangutans possess some of the longest arms in the world. Surprisingly, their arms are longer than their legs and are often used for movement from one tree to the other and for feeding purposes. Just like humans, Orangutans have four fingers, a thumb, and fingernails.

8. Around 60% of the Orangutans’ diet is fruits

Most of the food consumed by the Orangutans comprises of fruits and young leaves. Researchers indicate that their daily consumption during the peak fruit season is over 10,000 calories. The favorite fruit of the Orangutans is called durian. However, when food is scarce they may also feed on tree barks, insects or birds’ eggs and soil.

9. Orangutans are the largest tree-dwelling (arboreal) animals on earth

Orangutans spend 90% of their time alone on the trees from where they feed, play, and sleep. They enjoy swinging from one tree branch to another; a habit which is known as “brachiating.” Orangutans also hang upside-down from branches for long periods. Occasionally, when they are on the ground they walk on all fours.

10.Male Orangutans are much bigger than females

This page was last updated on October 25, 2019.
By Sharon Omondi