Bangladesh is home to more than 388 bird species, 110 mammals, 109 reptiles, 22 amphibians, 17 marine reptiles, and three marine mammals. A further 240 species of birds migrate to the country annually during winter or breeding seasons. Despite the remarkable achievement, not all is well with the wildlife of Bangladesh. Some species have become extinct, including the one-horned and two-horned rhinoceros, while a further 200 are threatened. The avifauna of Bangladesh makes it a bird watchers and ornithologists paradise. These are some animals found in Bangladesh. 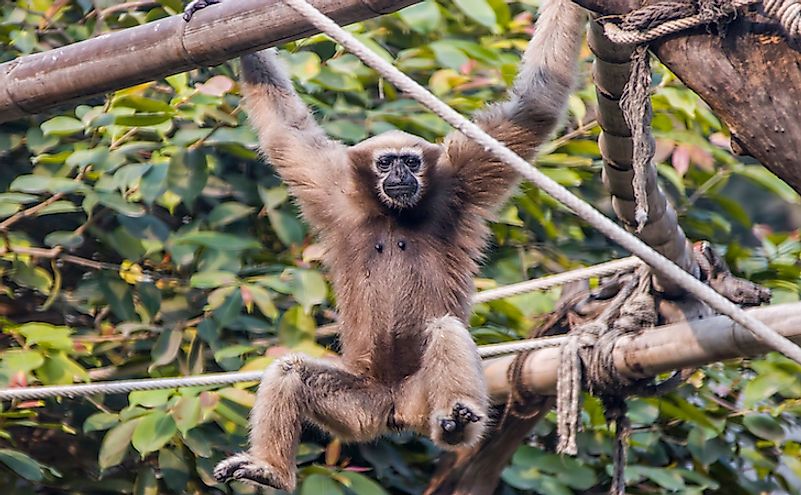 Swift movements and shrill whooping calls distinguish the western hoolock gibbon. Its arms are double the length of its legs. In the past three decades, the population of these primates has declined by over 90% due to environmental degradation, mainly deforestation. The few remaining animals can be seen maneuvering the treetops of Lawachara National Park in northeastern Bangladesh. The species is listed among the 25 most threatened primates by IUCN and is therefore protected by the government. Several conservation reserves consisting of natural and planted vegetation have been established in the country to protect isolated populations. The hoolock gibbons spend the entire day in trees and only climb down when necessary. 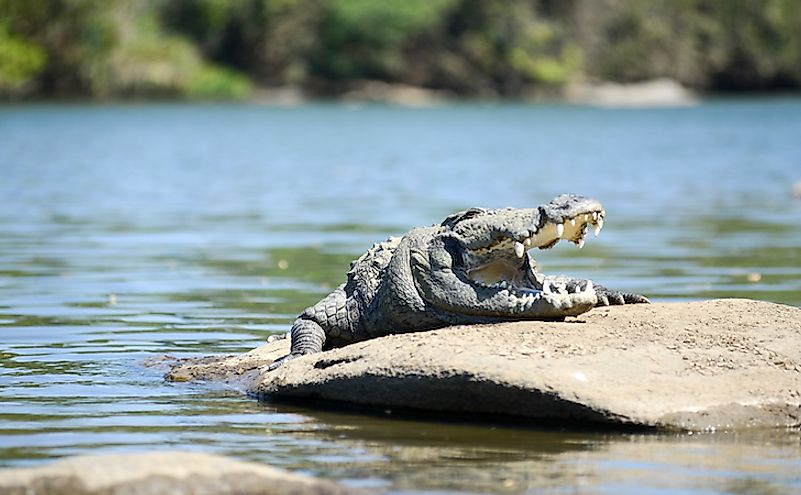 The mugger crocodile is distinguished by a slightly longer snout than other crocodiles. Its body is heavily armored by grey-brown scales. More than 100 individuals are found at the Sundarbans mangrove swamps, a 350,000 acre UNESCO world heritage site in Khulna Division. The crocodiles are elusive and hard to spot along the river banks, but a few individuals can be seen sun basking in the early morning. The crocodiles are also found in the Tomb Mosque of Khan Jahan Ali in Bagerhat. Mugger crocodiles prey on fish, turtles, birds, mammals, and snakes. During the dry season, they migrate over land in search of water and prey. 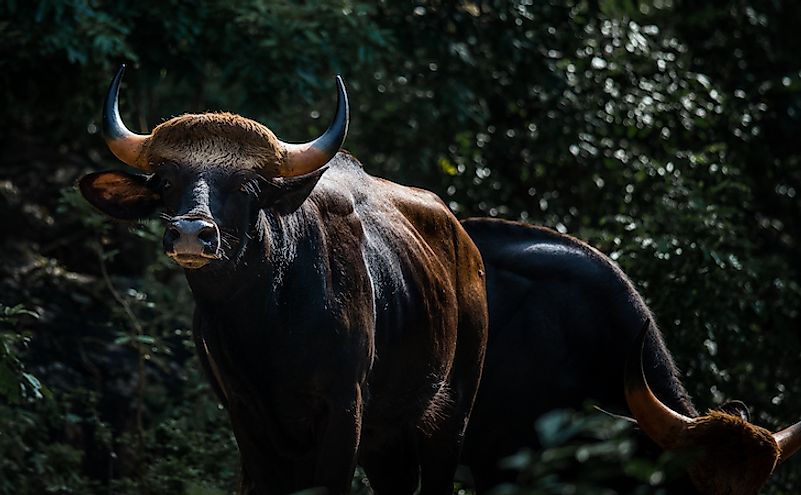 The gaur, also known as the Indian bison, is the largest of the bovines. It is a native species of South and Southeast Asia. The gaur was declared vulnerable in 1986 due to their declining numbers, limited range, and degradation of their natural habitat. A few animals are found in the Chittagong Hill Tracts of Bandarban district, Bangladesh. Over the past three decades, the population has declined by over 70% due to deforestation and hunting by the native people of Sangu Matamuhuri forest despite a ban on poaching. They prefer evergreen, semi-evergreen, and deciduous forests but can occasionally be seen in deciduous forests. Gaurs are also found in Vietnam, Laos, Cambodia, Myanmar, Malaysia, India, Bangladesh, China, Nepal, and Bhutan.

The Bengal tiger is a native species of the Indian subcontinent. There are between 2,600- 3,350 tigers left in the wild, a significant rise compared to the less than 2,500 at the start of the decade. About 440 tigers are in Bangladesh, 250 in Nepal, and 100 in Bhutan. The Bangladeshi population is scattered throughout the dense forests of the country, but approximately 100 tigers are found at the Sundarbans. As the national animal of Bangladesh, the Bengal tiger is protected from poaching, but habitat destruction remains an imminent threat. The conflict between tigers and humans in the Sundarbans has risen in the recent past as people move closer and seek more resources from the forest. 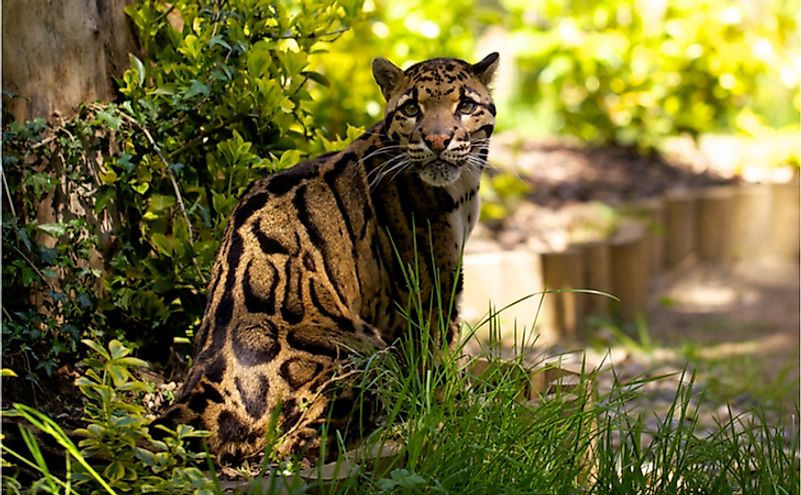 The clouded leopard is found throughout Southeast Asia and southern China. It was listed as vulnerable in 2008 due to declining numbers, limited range, and destruction of its natural habitat. There are about 10,000 individuals in the wild. They spend much of their time in trees thanks to their large paws and long tails. The Bangladeshi population is found along the Himalayan foothills and the Chittagong Hill Tracts. They feed on southern pig-tailed macaque, barking deer, pheasants, pangolin, slow loris, and squirrels. Hunting of the leopard is banned in most countries, but the laws are barely enforced except in Bhutan, where it is actively protected in conservation reserves. August 4 is the designated International Clouded Leopard Day.

The Asian Elephant is the largest terrestrial animal in Asia. It is distributed across Southeast Asia and the Indian subcontinent. The elephant was listed as endangered in 1986 as their numbers have declined by 50% over the past 75% due to poaching, habitat loss, and fragmentation. Despite the declining global population, the resident Bangladeshi population rose to about 268 elephants compared to 178 in 2004, while about 100 individuals migrate across the borders. A large number is found around the Chittagong Hills and Garo Hills. Bangladesh should not be complacent over the rising numbers as the elephant is still listed as critically endangered in the country. Human encroachment and infrastructural development have blocked off the elephant corridors resulting in fragmented populations.

The Asiatic black bear is the only bear species in Bangladesh. The others are thought to be extinct in the wild since they have not been spotted in the wild for the past 15 years. The Asiatic black bear is critically endangered in Bangladesh as the few individuals in the Sylhet region and Chittagong Hill Tracts are on the verge of extinction. It is difficult to spot the bears in their natural habitat, but their presence is noticed by the footprints, dens, and waste they leave behind. If conservation efforts are not undertaken, the black bear risks becoming extinct in Bangladesh over the next decade. 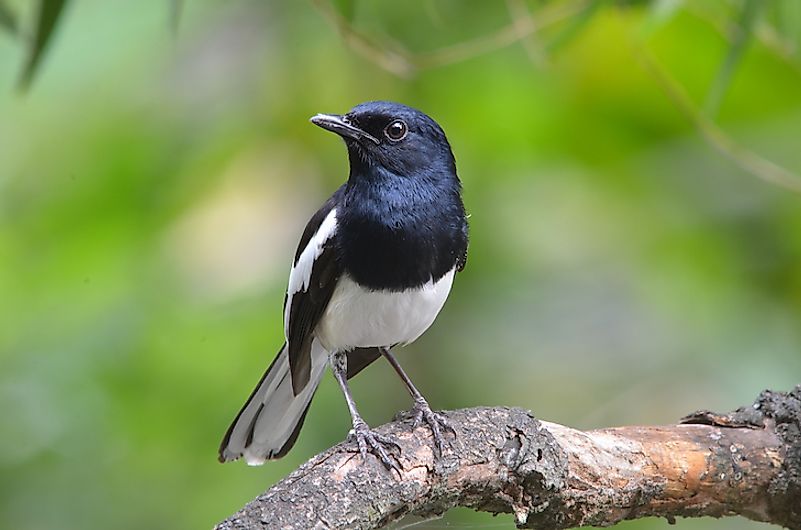 The magpie robin is the national bird of Bangladesh. It is featured in the country’s emblem, monuments, and currency. It is a relatively small bird that grows to about seven inches from head to tail. Despite being a shy bird, it can be distinguished by its long melodies and occasionally mimics other birds. The magpie robins are found in rural Bangladesh where the environment is quieter, and breeding can occur without human interference. They build nests in trees or ground but spend much of their time on the ground searching for insects.

The myna bird is common in Bangladesh. It is about the size of the American robin. The myna bird is a blend of several colors ranging from wine-brown on the breast, a deep blackhead, and neck to splash white on the edges of the wings. Its legs and bill are bright yellow. It is an adaptive bird that can thrive in both rural and urban environs. It feeds on worms, insects, and plants and can often be seen perched on cattle backs feeding on ticks or among chicken. Mynas can be domesticated and taught to imitate the human voice.

The hispid hare is a rare hare that is shy and secretive. It is sometimes known as the Assam rabbit. The hare is distinguished by its large teeth and a long brown tail. It feeds on tree bark, crops, grass roots, and hoots. The historical range of the hare extended from India through Nepal, and into Bangladesh. Today, the populations are fragmented and at risk of becoming extinct in some regions. Habitat destruction and poaching remain the greatest threat to the hispid hare.

This page was last updated on December 11, 2019.
By Victor Kiprop