The Sea of Azov, a northern extension of the Black Sea, is located on the southern coastlines of Russia and Ukraine.

The Don and Kuban rivers (and others) feed fresh water into the sea. The rivers also discharge vast quantities of silt (especially the Don), and in the Taganrog Gulf of the northeast, water depth runs 3 ft (1 m) or less at times.

Water movement (currents), high levels of nutrients, and a shallow depth make the Sea of Azov an ideal home for a wide variety of fish. However, over-fishing and pollution runoff continues to deplete their numbers.

Though somewhat difficult to navigate because of its shallowness, significant levels of freight and passenger traffic do flow through the port cities of Berdyans'k, Mariupol, Taganrog and Yeysk.

A NASA space shuttle photo of the Sea of Azov and the Black Sea is here. Note how murky the sea looks because of its depth and high levels of silt. 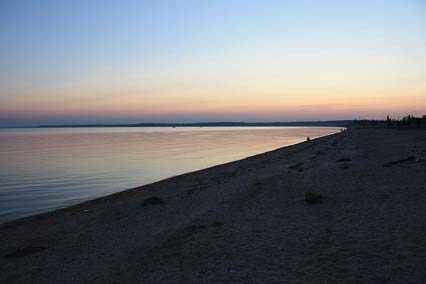 The Sea of Azov as it runs along the Ukrainian coast...
kahonyc knnr at en.wikipedia.org