Positioned between the Kamchatka Peninsula, the Russian coastline, Sakhalin Island, the Japanese island of Hokkaido and the Kuril Islands, the Sea of Okhotsk is an extension of the North Pacific Ocean.

In this northern sea winter navigation is usually difficult, and at times impossible due to ice. Regardless, commerce still flows most of the year through the important Russian ports of Magadan, Palana and Yuzhno-Sakhalinsk.

With the exception of Japan's Hokkaido Island, the Sea of Okhotsk is surrounded on all sides by territory administered and controlled by the Russian Federation.

However, Japan still maintains a claim to the four southernmost islands of the Kuril Archipelago, including Kunashir, Iturup, Shikotan, and the Habomai rocks. Japan calls them the Northern Territories.

print this mapother bodies of water 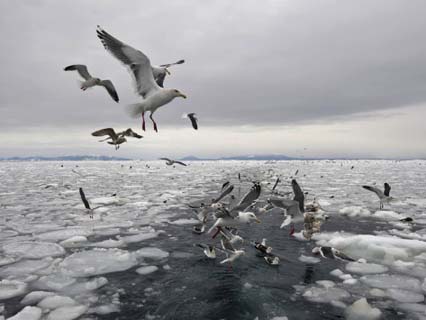 Gulls fly over the frozen Sea of Okhotsk waters...
by Gerald & Buff Corsi
Buy This at Allposters.com