Positioned along the southern edges of the South American continent, this once-vital passageway is named for the Portuguese adventurer, Ferdinand Magellan, the first explorer to circumnavigate the globe.

His chosen route around the continent in 1520 (shown with red arrows) though dangerous at times, proved to be the fastest and safest connection between the Atlantic and Pacific Oceans for sea-going commerce and exploration.

Sheltered by mainland South America and the islands of the Tierra Del Fuego archipelago, this route was considered much safer than the Drake Passage, a more violent stretch of chaotic water between Antarctica and South America, one frequented by icebergs and plagued by gale-force winds.

Located on the Strait of Magellan, Chile's Punta Arenas was once one of the most important supply stops for mariners of the day, until the Panama Canal opened in 1914. 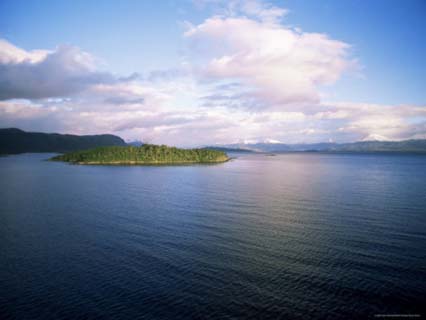 The calm and cool waters of the Strait of Magellan...
by Aaron McCoy
Buy This at Allposters.com