Located in northwestern Russian, directly east of St. Petersburg and to the southeast of Finland, Lake Ladoga is European Russia's largest freshwater lake.

There are over 650 islands in the lake, and Lake Ladoga's shoreline is completely covered by alders, pine and willow trees.

Hundreds of rivers and lakes (too numerous to illustrate on this small map) were originally formed by the lake's huge water basin. The largest outlets (or tributaries) include the Neva, Svir, Says, Volkhov and Vuoksi rivers. 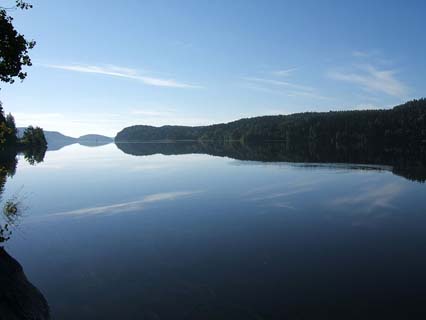 The glassy waters of Lake Ladoga...
Samulili at en.wikipedia.org