The Diomede Islands are two rocky islands located in the middle of the Bering Strait, about halfway between Russia and Alaska. These small islands are separated by the International Date Line.

The first European to reach the islands was the Russian explorer Semyon Dezhnev in 1648. A Danish navigator (in Russian service) Vitus Bering re-discovered the Diomede Islands on August 16, 1728, the day when the Russian Orthodox Church celebrates the martyr St. Diomede (the islands namesake).

Archaeologists have concluded that during the last Ice Age, a natural land bridge still spanned the short distance between the two continents, which over eons of times has all but eroded due to the strong currents and relentless winds.

In the last few decades some factions have discussed the construction of a bridge over the strait, however, financial and weather concerns have continually stalled the project. Recently, talk of a tunnel under the strait has been on the front-burner, however, the high cost of same will certainly be a factor, but imagine driving from Alaska to Russia. Wow, what a concept! 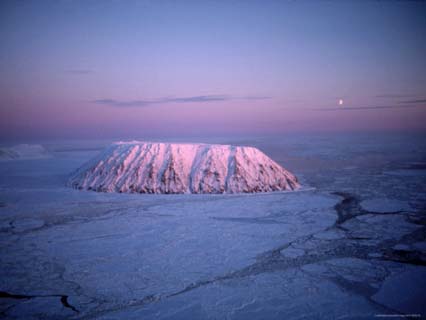 Eighteen thousand years ago the Diomede Islands were volcanic mountains...
by Ira Block
Buy This at Allposters.com