Cape Horn, the southernmost tip of South America, remain a maritime legend to this day, as sailing around this remote point and then through the Drake Passage was (and is) one of the most challenging nautical routes on the planet.

The violent stretch of chaotic water between Antarctica and South America, one frequented by icebergs, huge waves and plagued by gale-force winds, is crossed by sailors with great trepidation. Many still prefer to use the sheltered Strait of Magellan, shown with little (red arrows) on the map.

The opening of the Panama Canal in 1914 subsequently reduced the need for maritime travel around Cape Horn, the notorious site of many ship wreaks, and the final resting place of countless sailors lost in its perilous waters. 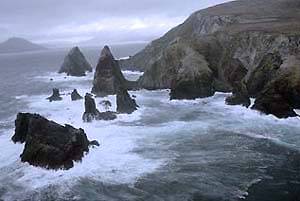