It is named for Danish-born Russian mariner Vitus Bering, who first spotted the Alaskan mainland while exploring the area with an expedition of Russian sailors in the mid-18th century.

The official boundary between the United States and Russia lies at the tip of the red arrow; at that exact point in the middle of the strait, are two islands - Big and Little Diomede.

Archaeologists have concluded that during the last Ice Age, a natural land bridge still spanned the short distance between the two continents, which over eons of times has all but eroded due to the strong currents and relentless winds.

In the last few decades some factions have discussed the construction of a bridge over the strait, however, financial and weather concerns have continually stalled the project. Recently, talk of a tunnel under the strait has been on the front burner, however, the high cost of same will certainly be a factor, but imagine driving from Alaska to Russia. Wow, what a concept! 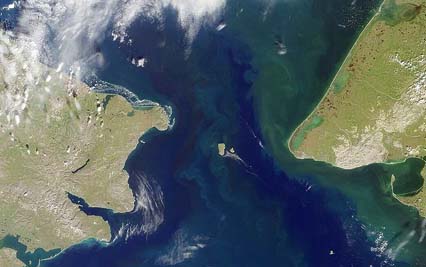 A satellite image of the Bering Strait