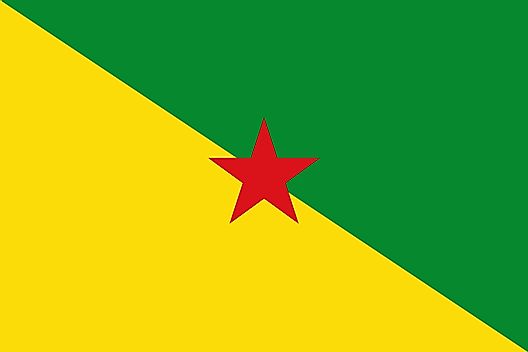 A narrow coastal strip fronts the Atlantic Ocean coastline of French Guiana; to the south, the land is literally an unsettled wilderness, covered by a dense jungle and parts of the Amazon rain forest, and dissected by dozens and dozens of rivers. Offshore islands include Iles du Salut (and Devil's Island).

French Guiana's land begins to gently rise in the central regions of the country, ending at the base of the Tumac-Humac Mountains, along its southern border with Brazil.

French Guinea is a land of rivers, many flowing north from the southern mountains; major ones include the Maroni and Lawa, forming its (disputed) border with Suriname; the Oyapok, forming a long natural border with Brazil, and the Approuaque, Camopi, Mana and Tompok.

The Barrage de Petit-Saut hydroelectric dam in the far north eventually formed a large artificial lake to the northeast of St Elie.