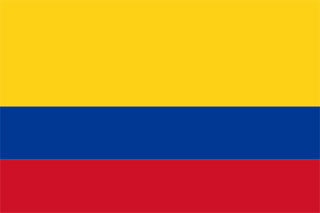 The current flag of Colombia was officially adopted on December 17, 1819.

The flag features three horizontal bands of yellow (double-width), blue and red. Colors of the flag are commonly interpreted in two ways:

One version indicates that the yellow symbolizes sovereignty and justice, blue as loyalty and vigilance, and red represents the valor shown and the victory achieved during the battles for independence from Spain.

A very popular children's song claims that yellow represents the gold Colombia once owned until the arrival of the Spanish, blue indicates the country's contact with two oceans and red represents the blood that Colombians spent in their struggle for independence from Spain. 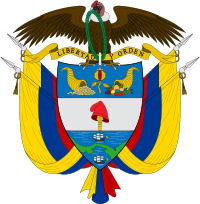 At the top of the Coat of Arms is the Andean Condor, an endangered species.

The shield is divided into three sections: the base section shows the

, which belonged to Colombia at one time. The middle section uses a Phrygian cap to symbolize freedom. The top section shows a pomegranate with two cornucopia, which is a colonial symbol for the Viceroyalty of New Grenada.

Behind the shield is a sail made from the Colombian flag, drapped over spears. Above the shield are the words "Libertad Y Orden" meaning "Liberty and Order".