Niue, one of the world's largest coral atolls, is approximately 1500 miles northeast of New Zealand.

The English navigator, James Cook, first sighted this beautiful spot in 1774, but was refused landing three times by Niuean warriors. Cook departed, but charted Niue and named it Savage Island.

Niue's remoteness, as well as cultural and linguistic differences between its Polynesian inhabitants and those of the rest of the Cook Islands, have caused it to be separately administered by New Zealand since the early 1900s.

The local economy suffers from the typical small Pacific island problems of geographic isolation, very limited natural resources, and a small decreasing population. In fact, the population of Niue continues to drop (from a peak of 5,200 in 1966 to about 2,200 in 2004), with substantial on-going emigration to New Zealand.

Revenues from the sale of collectable postage stamps and tourism give the local economy a much-needed boost.

Niue is a raised coral atoll in the South Pacific that consists of steep limestone cliffs along the coast, giving way to a central plateau.

Two large bays indent the western coast, with Alofi Bay in the center and Avatele Bay in the south. Limestone caves are common close to the coast, and a coral reef almost completely surrounds the island--with the only major break being on the western side, close to Alofi. Niue is one of the world's largest coral islands.

The highest point is an unnamed elevation near the Mutalau settlement, and it peaks at 223 ft. (68 m).

ATTRACTIONS: (a few major)
Not only is Niue one of the smallest independent nations on earth, but it is also the largest raised coral atoll in the world. Famed for its world class diving, caving, fishing, and nature trails, the island is a perfect place for water enthusiasts and those who relish the outdoors.

June through October you can even spot humpback whales and their newborn calves off Avatele.

With its tropical, South Pacific Ocean location, Niue is hot and humid, with average daily high temperatures in the high 80s throughout the year. 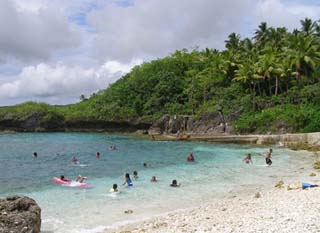 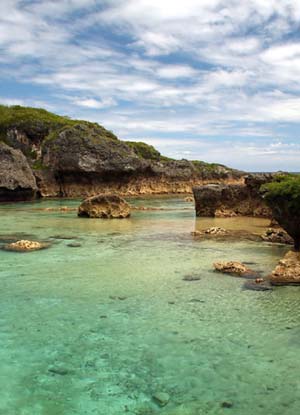 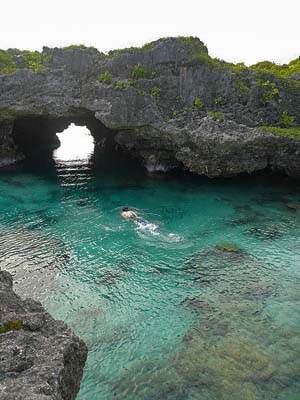 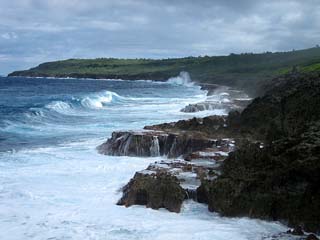