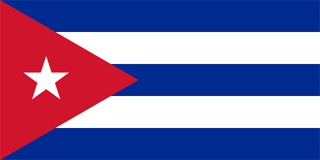 The overall design is modeled after the flag of the United States of America. The red triangle is from the Masonic symbol for equality. La Estrella Solitaria, or the white Lone Star, is centered on the red triangle. 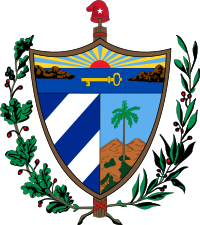 The Cuban Coat of Arms consists of a shield, a wreath, and a Phrygian cap. The Phrygian cap is said to represent liberty.

The shield is divided into three sections. The gold key between two rocks symbolizes Cuba's position between North and South America.

The blue and white stripes represent the flag. The lower right division of the shield contains a Cuban landscape scene.

The wreath is made of an oak branch and a laurel branch. The oak branch symbolizes the strength of Cuba and the laural branch represents the honor of Cuba.