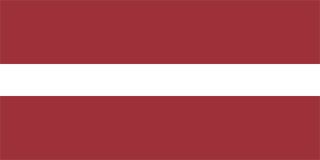 Long a part of the former Soviet Union, the modern flag is symbolic of a revered time-honored legend. It is told that the deep red color is representative of the blood shed by a wounded Latvian leader, and the white represents the cloth used to wrap his wounds. 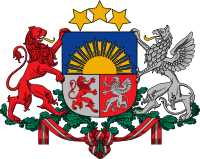 The Latvian coat of arms was created in 1918, and combines symbols of the statehood and ancient historical districts of Latvia.

The sun in the middle of the piece symbolizes national statehood, and has 17 rays symbolizing the 17 Latvian-inhabited districts. The 3 stars are an inclusion of the historical districts (united Kurzeme – Zemgale, Vidzeme and Latgale). Western and southwestern Latvia are represented by the red lion, while Northeastern and southeastern Latvia are represented by the silver.