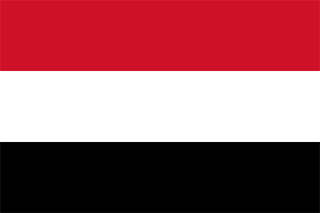 The flag is modeled after the tricolor flags of the former North and South divisions of the country. Red, white and black are all Pan-Arab colors that symbolize Arab unity.

Yemen's coat of arms is composed of a golden eagle bearing a shield with the Marib Dam and a coffee plant.

To the left and right of the eagle are Yemen national flags, and in the talons of the eagle is a scroll with the name of the country scripted in Arabic.