The flag of Qatar was officially adopted in 1949.

The legend is that Qatar's original flag used an unstable red dye, and the relentless sun faded the red into a shade of maroon. That color is referred to today as Qatar Maroon.

The toothy edge between the maroon and white fields, and the flag's width, helps to identify it from that of Bahrain's flag, a Gulf State country formerly associated with Qatar. 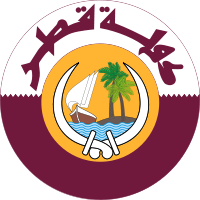 Qatar's coat of arms (considered an emblem) was introduced in 1976.

It contains two bent swords inside a yellow circle. Within the swords is a ship, known as a dhow, sailing next to an island.

Surrounding the middle of the emblem is a depiction of the Qatar flag with the name of the country written in Kufi writing.