The Philippines flag was officially adopted on May 19, 1898.

The three gold stars and sun represent the three main divisions of the country - Luzon, Mindanao and Visayas. 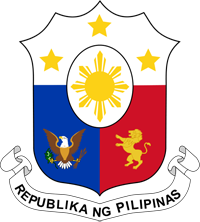 The coat of arms of the Philippines is composed of a shield depicting sun and stars (transposed from the flag).