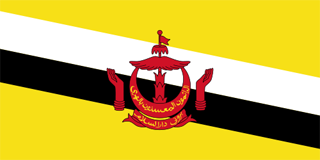 The Brunei flag was officially adopted on September 29, 1959.

The flag features the country's national emblem. Yellow represents the Sultan of Brunei, and the black and white stripes represent the country's chief ministers. 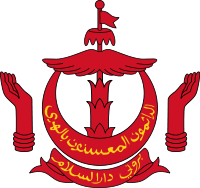 Brunei's national crest was adopted in 1940, and contains five components: the flag, royal umbrella, wing, hands, and the crescent symbol of Islam.

Arabic script reading, "Always in service with God's guidance," is written on the crescent, and the banner below displays the name of the country.

The wings of the crest represent protection of justice, tranquility, prosperity and peace; the hands for the government's duty to preserve and protect.