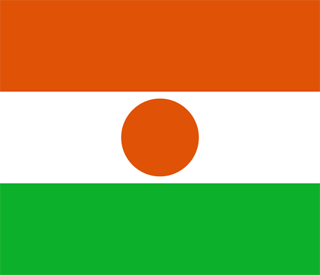 The national flag of Niger was officially adopted on November 23, 1959.

The centered orange circle is symbolic of the sun. The orange stripe represents the savannah grasslands, white the Niger River, and green represents the country's rainforests.

Niger's coat of arms features a four-part flag draped in the national colors behind a white shield. The four golden symbols on the shield are a sun, crossed Tuareg swords, pearl millet heads, and the head of a zebu. A ribbon displaying the name of the country in French rests below.