The Central Africa Republic flag was officially adopted on December 1, 1958.

The red stripe is said to represent the blood of humanity and symbolizes the respect that Europeans and Africans have for each other. The yellow star of independence symbolizes a bright future. Red, white and blue are taken from the

, and red, yellow and green are the 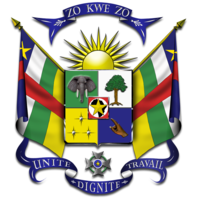 The Central African Republic coat of arms is composed of a shield supported by two flags. The elephant and baobab tree within the shield are symbolic of nature and represent the backbone of the country, the hand in the bottom right is a symbol of the MESAN party, the three diamonds in the bottom left are symbols of the mineral resources of the country, and the golden star centered, above a map of Africa represents the country's position on the continent.

A golden sun rises above the shield, and a medal rests underneath.