Eight different species of bear currently exist, and most inhabit parts of the Northern Hemisphere, especially in North America, Europe, and Asia. The eight extant species of bear are the sun bear, sloth bear, Asian black bear, giant panda, spectacled bear, American black bear, brown bear, and polar bear. Additionally, there are also animals with names that contain the word "bear" but are not true bear species. For example, the koala bear is a marsupial, the Asian bearcat is a viverrid, and the water bear is a microscopic extremophile. The sloth bear, sun bear, and Asian black bear are most common in Asia and are highlighted below. 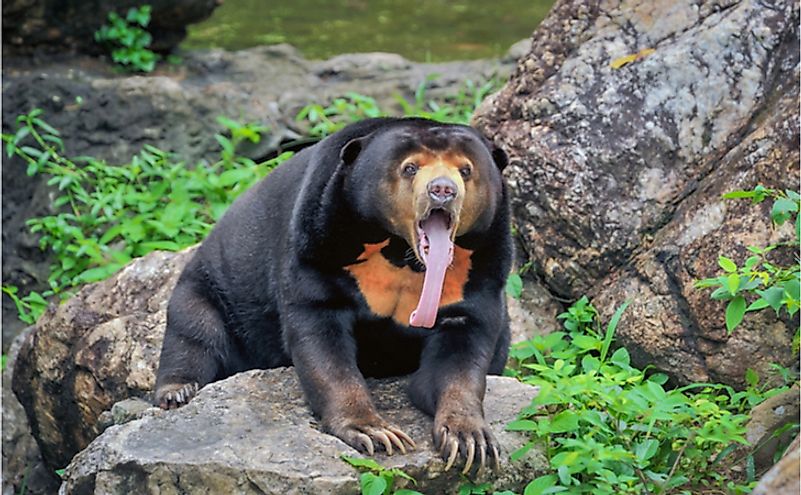 The sun bear inhabits the warmer regions of Borneo, Vietnam, Thailand, and Malaysia. It is the smallest of the bear species, with adults weighing between 60 and 176 lb and measuring 47 to 59 in. Males are often 10 to 20% larger than females. The sun bear has fur that is black, short, and sleek, but some individuals are grey or reddish. The skin on the upper lip is bare, its tongue is protrusible, and its ears are small, round, and capable of limited movement. The front limbs of the sun bear are curved inwards, and its claws are long, pointed and cream in color. Its muzzle is short and light-colored, with a white area extending above the eyelids. When feeding, the sun bear extends its long tongue to extract honey and insects. The species also eat small mammals and reptiles. The population of the sun bear is declining at an alarming rate due to habitat destruction of their natural habitat. The species is also hunted for its bile that is used in traditional Chinese medicine (TCM). Rather than having a specific breeding season, sun bears can reproduce throughout the year. Additionally, given its distribution in warm tropical regions, the sun bear does not hibernate. 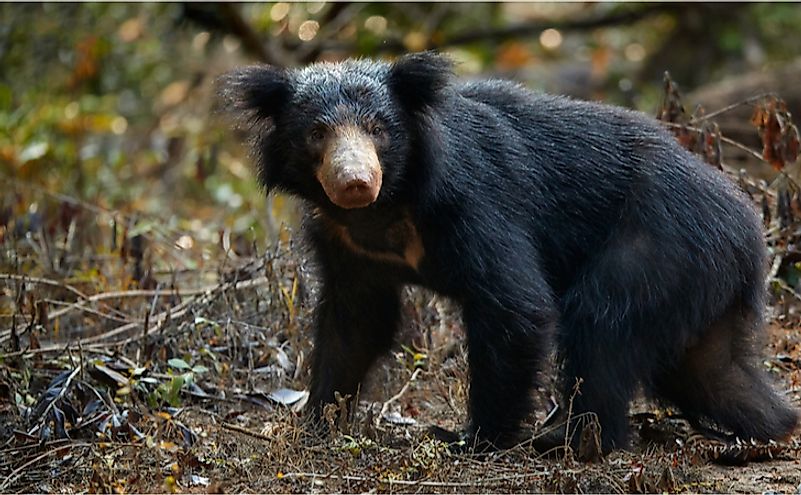 The sloth bear inhabits parts of Sri Lanka, Nepal, and India. A population previously existed in Bangladesh but has since become extinct. The species thrives in dry savannahs, humid tropical forests, and scrubland. It avoids any form of human contact since it considers humans to be predators rather than prey. The sloth bear is distinguished by its long smooth and black fur that is visibly different from other species of bear. It has a long snout with lips that overreach its nose, and is therefore sometimes referred to as "labiated bear." The bear is medium-sized and can weigh between 121 and 231 lb, although males are much larger and can weigh up to 423 lb. The sloth bear's diet consists of insects and fruits. The bears give birth to one or two cubs, usually between November and January, and young cubs live with the mother for up to two-and-a-half years. They have long, sharp claws that inflict serious injuries, and charge aggressively to scare predators, but often choose to avoid confrontation when possible. 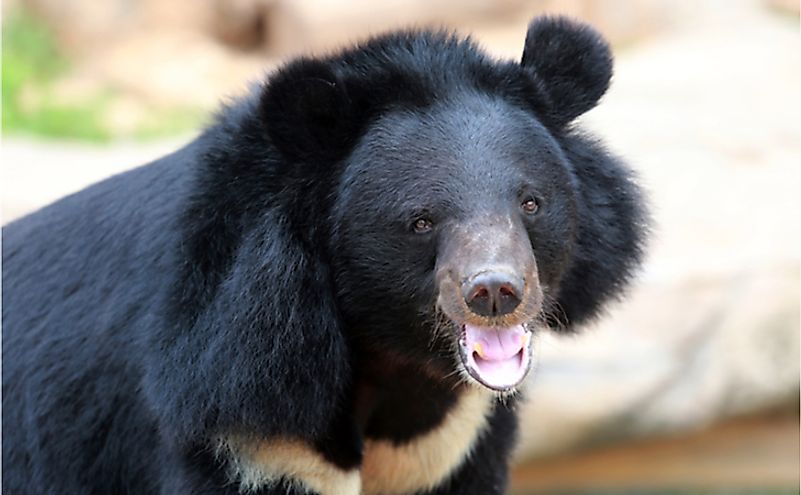 The Asian black bear is a species of bear also known as the white-chested bear or the moon bear. It is a medium-sized species native to the arboreal regions of Asia and is known to inhabit the Himalayas, northern India, Korea, Taiwan, Siberia, northeastern China, and the Japanese islands of Honshu and Shikoku. The Asian black bear has black fur, with a light brown muzzle and a distinct V-shaped white patch on its chest. Its ears stick out from the side of its head and are visibly larger than those of other species. The Asian black bear is slightly smaller than the American black bear and brown bear, but adult males can weigh up to 440 lb. Physically, they resemble brown bears but differ in terms of color and size. Their hind legs are strong and help the animal climb trees more effectively than other bears. They prefer walking bipedally and can travel upright for more than a quarter-mile. The Asian black bear is a herbivorous animal, although its jaw structure is not specialized for eating plants, like the jaw of pandas. Their diet varies depending on the season, but usually includes shoots, branches, and leaves during the spring, and consists of ants and bees in the summer. The Asian black bear has experienced significant habitat loss due to deforestation and has also been hunted to near extinction.

This page was last updated on October 7, 2019.
By Victor Kiprop