Many people confuse octopuses and squids with each other mainly because they are quite similar in appearance. Both belong to class Cephalopoda. They have bilateral body symmetry with heads and arms or tentacles which assist them in catching their prey and swimming. Despite some similarities, octopuses and squids are quite different. They have unique ways of hunting their prey, and their habitats are varied as well.

Both octopuses and squids are classified as cephalopods which mean they are head-footed creatures, although they do not have real feet. The most prominent feature in their anatomy is the head. The two also belong to the larger classification of mollusks which are the second largest group of invertebrates after arthropods. They have eight arms and unlike other mollusks, the two do not have a shell.

When inspected closely, the two creatures have several differences in their physical appearance, and anyone can easily tell them apart. Octopuses have a round head and their eight arms radiate out like the spokes of a wheel. Squids, on the other hand, have a triangular head and their eight arms are located on the rear part. They also have two extra tentacles which are relatively long, and their bodies are elongated. The squids possess a structure which is a vestigial remnant of the shell, and it is referred to as a pen. The structure acts as a flexible backbone. However, octopuses have entirely lost their shell, and any trace of it is not found on their bodies. The two creatures move by jet propulsion, and they achieve this by sucking in water into the muscular sac located in the mantle cavity surrounding their bodies. They achieve the forward motion when they quickly eject water out through a narrow siphon.

The squids also have two fins attached to their heads, and they use them for propulsion when they are swimming at low speeds. The fins also play a role in steering and stabilizing the squid, when they are swimming faster they wrap their fins around their body. Octopuses do not have fins. However, some deep water species of octopuses such as dumbo octopuses have an ear-like fin on their heads which resembles the floppy ears of the Disney Dumbo. The octopuses and squids have suckers along their arms, and squids have two extra tentacles. The tentacles have specialized hooks equipped with sucker rings having teeth attached to them. One interesting fact about octopuses and squids is that they have squirt ink and copper in their blood. It has been found that copper helps in transporting oxygen in their bodies and lends a blue color to their blood. 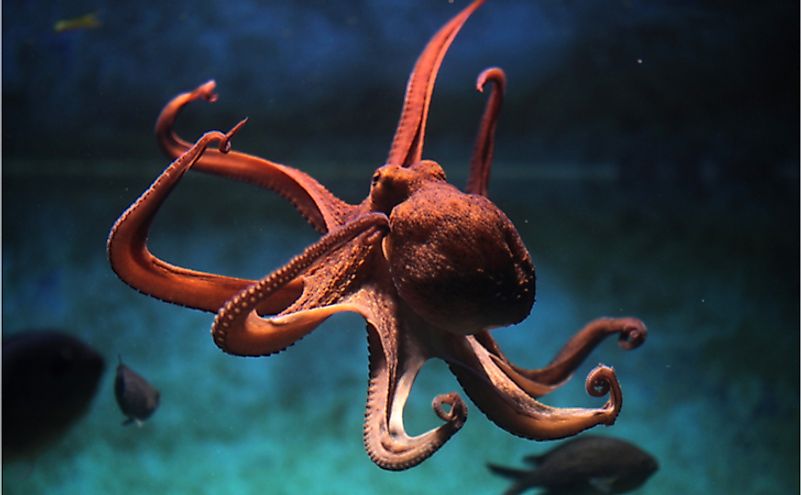 Although squids are generally smaller compared to octopuses, there are squids which are extraordinarily large. Squids can grow to reach anywhere between 23.5 inches to almost 66 feet in length. However, the smallest species of squids such as sepiolid are less than an inch in length. On the other hand, octopuses grow to reach anywhere between 0.4 inches and about 30 feet long.

Another significant difference between the octopuses and squids is their lifespan. Squids have been observed to live up to anywhere between nine months and five years while the octopuses can live between one year and three years.

Squids have been known to inhabit different areas of the open seas ranging from shallow waters to the depths of the oceans. Octopuses, on the other hand, have been found to prefer the seafloor whether it is shallow water or deep-sea waters. They are the dwellers of the ocean floor.

Octopuses and squids have different hunting techniques because of their differences in anatomy. Squids are found swimming in groups in the open seas and the extra tentacles having sucker rings gives them an extra reach that helps them catch their prey. They feed mainly on shrimp and fish, which they consume in chunks. Octopuses hunt for crustaceans on the seafloor. Typically, when they trap their prey, they pierce and inject poison to paralyze them after. Then, they dissolve and loosen the body parts of their prey using saliva before they rip them apart using their mouth and beak.

A female octopus has a mantle cavity where a male octopus deposits sperm using a specialized arm known as hectocotylus. After fertilization, the female lays the eggs in her den and guards them until they hatch. The eggs will take about 30 days to one year to hatch, depending on the species. Females build walls of rocks to seal the den where she will remain until the eggs are about to hatch. Octopuses and squids die after reproduction. Squids mate in groups and the females attach the eggs on the floor of the ocean or seaweed.

Harvesting Of Octopuses And Squids

Octopuses are trapped using chains which are dragged along the floor of the ocean driving the octopuses into a trap net. Another popular method of catching octopuses includes dropping the pots and traps that octopuses will use as a shelter. Drift fishing and spearfishing are among popular methods of harvesting octopuses. Squids are captured by jigging. Fishers lure the squids using jigs by use of drop lines and bright lights which they jerk up and down to attract squids to the movement of light. Large seine nets are also a common method of catching squids, where the nets are used to encircle the squids to form pockets to trap them. There are 15 main harvesting regions around the world, and currently, only two have a sustainable harvest. Octopuses and squids produce a poison which they use to paralyze their prey, but the poison is too weak to cause any harm to humans.

This page was last updated on September 17, 2019.
By Benjamin Elisha Sawe

What Are The Differences Between Octopus And Squid?