Crocodiles, alligators, and gharials share many physical characteristics but also exhibit unique distinctions. They are all members of the class Reptilia and order Crocodilia, but belong to different families. The alligator and crocodile share more similarities than the gharial, which is distinguished by an elongated snout. The gharial is a fish-eating reptile native to the freshwater rivers of the Indian subcontinent, and resembles a crocodile except for its elongated snout. The gharial is critically endangered as a result of habitat loss, depletion of fish reserves, and entanglement in fishing nets.

Differences Between Crocodiles, Gharials, and Alligators 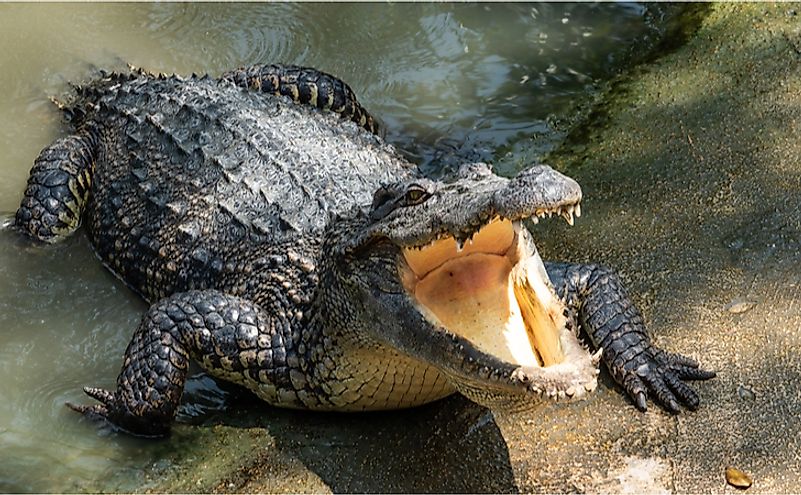 There are three different families of crocodilians: Alligatoridae (alligators), Crocodylidae (crocodiles), and Gavialidae (gharial). The three families are members of class Reptilia and order Crocodilia. Researchers believe that the animals share a common ancestral origin but are separated by over 40 million years of evolution.

Gharials are easily identifiable by their distinctly long and thin jaws. The jaw is adapted to maneuver quickly to catch fish, which is the primary part of  the gharial's diet. The jaws of crocodiles and alligators can be more difficult to distinguish when observed from afar. Crocodiles have long and pointed V-shaped noses, whereas alligators have round and U-shaped snouts. The snout of the alligator is designed for strength and can withstand stress when applying massive force to break bones and shells. The V-shaped snout of the crocodile does not match the strength of the alligator, but is capable of exerting a powerful bite. The jaw is designed to feed on a variety of prey. 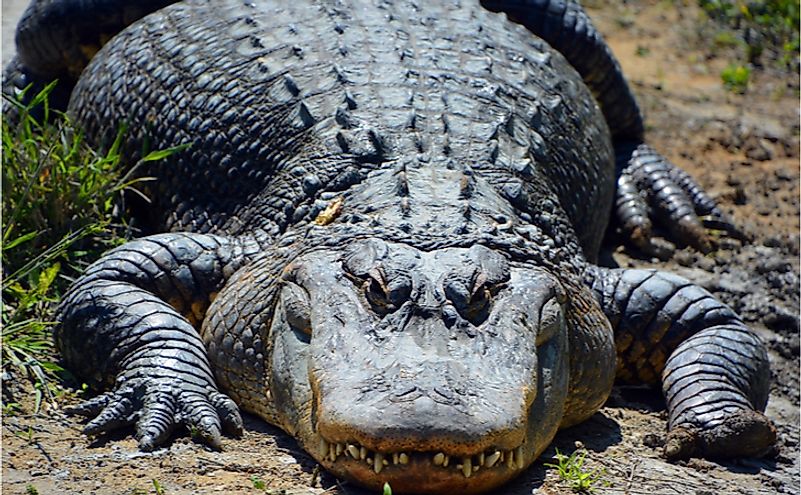 The long, thin snouts of gharials have about 110 teeth, with 50-52 on the lower jaw and 54-58 on the upper. The teeth at the front of the jaw are the largest since they are designed for grasping. Alligators have a wider upper jaw that overlaps the lower, and when the reptile closes its mouth, the teeth in the lower jaw fit perfectly in the sockets or depressions of the upper jaw. The lower and upper jaws of crocodiles are about the same width, and the teeth fit along the margin. When a crocodile closes its mouth, the upper teeth interlock with the lower.

Gharials and crocodiles differ from alligators in that they have salt glands on their tongue in the form of modified salivary glands. Although alligators do have the same structures, they have become obsolete and can no longer secrete salt. The salt glands make crocodiles and gharials more tolerant of saline water and can, and are therefore able to spend more time in the open ocean. Crocodiles have the ability to migrate across wide bodies of water, which explains their wide distribution. Additionally, saltwater crocodiles can live for extended periods along the coast and venture into the ocean in search of food. Alligators can only spend short periods in saline conditions and prefer freshwater bodies. 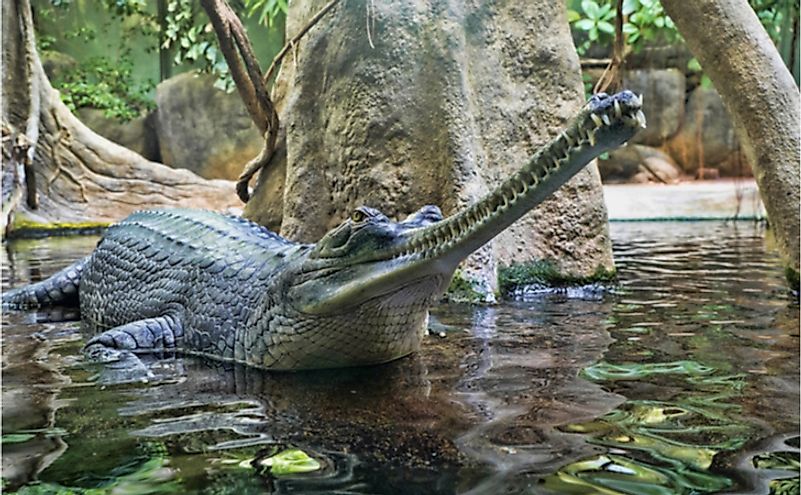 The differences described above are apparent physical disparities between the three reptiles. However, there are also innate differences, such as behavior. Freshwater crocodiles are the most aggressive of these reptiles, while alligators, saltwater crocodiles, and gharials are relatively docile. However, external factors such as temperature, habitat, and the presence of other animals also affect the activeness of reptiles. Saltwater crocodiles grow to an average length of 17-18 ft, but some individuals can exceed 20 ft, while the African dwarf crocodile has an average length of only 4-5 ft. Alligators are native to Eastern China and the Southeastern United States, while crocodiles are spread across the Americas, Southeast Asia, Australia, and Africa. Gharials are limited to the Indian subcontinent.

This page was last updated on November 4, 2019.
By Victor Kiprop