Boa constrictors and pythons are large non-venomous snakes found mainly in the tropics, and they kill their prey by constriction. Pythons are native to Asia, Africa, and Oceania, while boa constrictors are found mainly in North and South America. Both snakes are considered primitive because they have not changed much during the millions of years they have been around. None of the snakes are aggressive, and they live for up to 30 years. There are few types of boas apart from the boa constrictors. In total, there are at least 40 species of boa snakes, and the most common one is the boa constrictor. Pythons, on the other hand, refer to a large group of snakes having 31 species which are categorized into eight different genera and therefore there is a big variation in the types of pythons. Although the two types of snakes are similar, there are several differences. 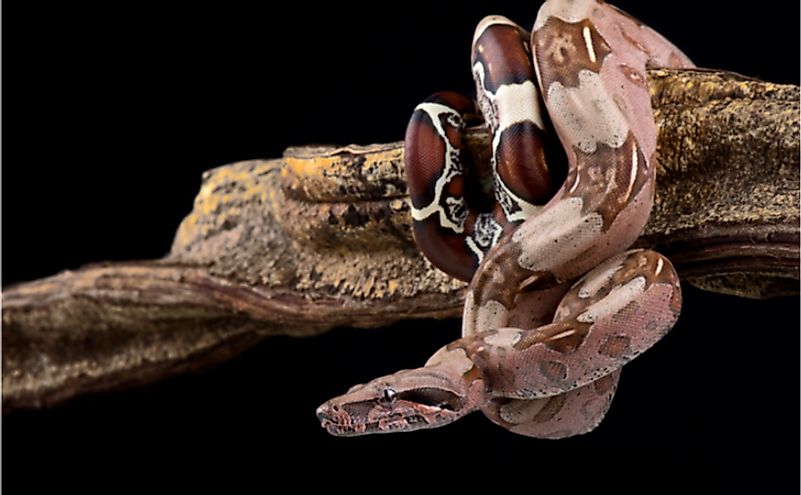 There is a big variation in the appearances of a python and a boa constrictor. Boas have shades of brown which could vary from gray to tan. They have reddish or brown markings. The markings become bigger towards the tail, and the tail could be red. For this reason, the boas are also known as red tail boas. Pythons have different color patterns of deep, brown, and attractive gold markings. They have different colors of red, black, white, grey, or silver with different patterns, which could be striped horizontally, spotted, or striped vertically among many other patterns

Both pythons and boas would rather escape as opposed to attacking when they are confronted. However, there is a difference between python and a boa if they are not used to people. In such a case, a boa would be more defensive than a python. Typically, pythons are afraid of confrontations. When they are kept as pets, boas are more active compared to pythons. When boas are handled, they move around, not because they want to escape, but because they are curious. Ball pythons are popular pets because they are placid and do not grow as big.

Pythons vary significantly in length depending on species. For instance, Burmese python can grow to reach up to 20 feet long while the pygmy python can reach only 20 inches long. The ball python is also known as the royal python is the most common and has an average length of between 3 and 5 feet long for females, while the males reach between 2 and 3 feet long. Boa constrictors reach an average of 7 to 10 feet long for females, while males reach between 6 and 8 feet long. Boas can reach about three feet in one year. Snakes typically do not stop growing only the rate of growth will slow as they age.

Some pythons are typically larger and therefore weigh more than boas, although there are some species of pythons that are significantly smaller than boas. The 5 top largest snakes are pythons, and they include the Burmese python, African Rock python, and reticulated pythons, which is the world’s largest snake. The only boa snake in the list is the green anaconda, which is the world’s heaviest snake. Some snakes could be excessively thick compared to their length, while others could be too thin. For instance, green anaconda could be as thick as a medium-sized tree trunk. Boa constrictors and ball pythons could be considered as heavy-bodied snakes, implying that, when their lengths are considered they are averagely thicker compared to other snakes. A female boa constrictor weighs between 13 lbs and 18 lbs and a male boa constrictor weighs between 8 lbs and 10 lbs. On the other hand, a female ball python weighs between 4 lbs and 5 lbs, while male ball python weighs between 3 lbs and 4 lbs.

Boa constrictors are found mainly in South America where they are widespread in the whole continent from south to north. Chile is the only country in South America where boa constrictors are not found. They inhabit particularly, the rainforest areas where they enjoy the tropical temperature and humidity as well as the abundance of prey. On the other hand, pythons are not found in South America, but they are common in Asia and Africa. Ball pythons are found mainly in West and Central Africa. The Burmese pythons are native to Myanmar (Burma) as the name suggests, but they are also found in other parts of Asia like Nepal, China, and India. Different species of pythons inhabit different habitats. Some pythons are found in dry areas, and others are found in rainforests. The ball pythons prefer the savanna grasslands.

Boa constrictors and pythons breed in different ways. Pythons are oviparous while Boas are ovoviviparous. Oviparous animals lay eggs, and therefore pythons lay eggs and sit around them. They will not move away from eggs even to eat, and they become extra aggressive when they are approached. Other snake types lay eggs and leave them. Boas which are ovoviviparous do not lay eggs, but instead, give birth to young ones. Their eggs hatch inside their bodies. Once they are out, the young ones fend for themselves, and the mother would not have anything to do with them anymore.

Boa snakes have few bones in their skulls, and they also have fewer teeth compared to pythons. Pythons have premaxilla bones with teeth on the upper jaw, which lacks in the boa snakes. Both snakes do not have fangs because they are constrictors. Their teeth point inwards and upwards, and this type of teeth configuration is unique to constrictors. If they bite the prey and they try to escape the teeth would sink even deeper. If they lose their teeth, it will regenerate after some time to replace the lost ones. In all snakes, each jaw on either side is not jointed with a bone, and they are separated allowing the snake to swallow prey much larger than its head.

Similarities Between Boa Constrictors And Pythons

Both the boa constrictor and pythons prey on similar food items such as birds and mammals as they prefer warm-blooded animals. Both snakes have pit organs which are unique structures that help the snake to hunt. These organs appear like tiny holes, and they are found near their lips. They use them in detecting infrared heat from warm-blooded animals.

This page was last updated on October 21, 2019.
By Benjamin Elisha Sawe

What Are The Differences Between A Boa And A Python?