Cassowaries are large, flightless ratites of the genus Casuarius. These birds are unique in many aspects:

All species of cassowaries are shy in nature and inhabit the deep forests within their range. They like to stay away from humans and disappear long before one comes to know of their presence. Thus, studying these birds is a difficult task. The birds are generally solitary and might be found in pairs or groups during courtship and nesting times or when ample food supplies are available. 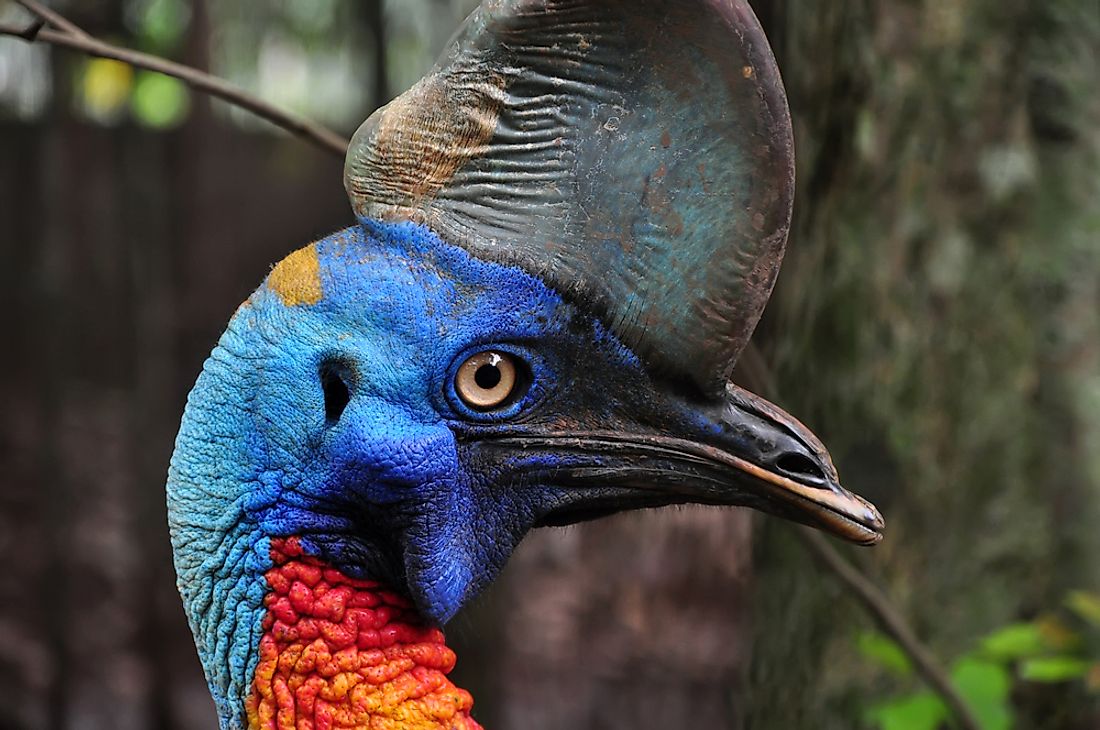 They Have Lethal Dagger-Shaped Claws

Cassowaries are known for their sharp, dagger-shaped claws. The birds have a three-toed foot where the inner toe in the medial position is equipped with a sharp claw that is about 125 mm long. Injury by these claws can be lethal to other animals including dogs and even humans.

Cassowaries Have Casques On Their Heads That Grow With Age

The cassowaries have keratinous casques on their heads which grow with age and can be as high as 18 cm. The size of the casque is species-dependent. Several functions of the casque in cassowaries have been suggested. Some researchers believe it is a secondary sexual characteristic. Others believe it helps the bird forage for food or as a weapon during disputes with each other for dominance. A study of the casque has revealed that it is spanned by tiny fibers that could serve some acoustic function.

The breeding season of the birds begin in May and extend till June. The female lays 3 to 8 bright green to place green-blue eggs into a heap of leaf litter that had been prepared for nesting purposes by the birds themselves. Interestingly, the female does not pay any attention to the eggs and chicks after laying the eggs and moves on to lay eggs in the nests of other males. It is the cassowary fathers who are doting dads and incubate the eggs for 50 to 52 days. During this time, the male cassowaries remove or add litter to regulate the temperature of the nest. Once the chicks hatch, the dad protects them for about 9 months and defend the young ones fiercely from all predators including humans.

Cassowaries are reputed to be dangerous to domestic animals and humans. The fear of these birds was so great that armed forces of Australia and America stationed in New Guinea were warned to steer clear of them altogether. The dagger-shaped claw of the cassowary can easily sever an arm or pierce an abdomen. A 2003 study revealed that of the historical 221 cases of cassowary attacks studied, 150 had been directed at humans of which 75% were inflicted by the birds that were fed by humans. 73% of the attacks were from birds expecting or trying to snatch food. Among the 150 attacks on humans, only one death was reported.

The human death was, however, not a result of the cassowary’s aggressive nature. On April 6, 1926, 16 year old Phillip McClean and his 13-year old brother encountered a cassowary on their property. The brothers decided to kill the bird by clubbing it to death. The bird tried to defend itself and kicked the younger boy who ran away in fear. The older one, however, continue to strike the bird when he tripped and fell to the ground. Upon his fall, the cassowary kicked him in the neck which severed his jugular vein. The boy soon died of his injuries.

Even though cassowaries are considered to be the deadliest birds in the world, they are currently threatened by human activities. The southern cassowary is classified as endangered in Australia’s Queensland. Only 20% to 25% of the former habitat of these birds remain today. Death by motor vehicle strikes are also common. Dog attacks, hunting, entrapment, and disease are the other major reasons of death of these birds. The birds play a vital role in the ecosystem they occupy. They help in the widespread dispersion of seeds of the rainforest plants. Hence, the need to conserve these birds is great. People are discouraged to hand-feed these birds as this makes them fearless of humans and they might venture into human settlements which makes them vulnerable to attacks.

What is the Most Dangerous Bird in the World?

Cassowaries are known for their sharp, dagger-shaped claws. The birds have a three-toed foot where the inner toe in the medial position is equipped with a sharp claw that is about 125 mm long. Injury by these claws can be lethal to other animals including dogs and even humans.