India is home to the most magnificent wild cat diversity in the world. Wild cats are distributed across the nation’s different biospheres that include rainforests, deserts, lowland forests, and dense jungles. The country is currently home to 15 species of wild cats, which represents approximately 40% of the total number of wildcat species in the world. The cat family in India is comprised of five big cats, eight medium-sized wild cats, and two small cats. India is the only country in the world that is home to the lion, the leopard, and the tiger. 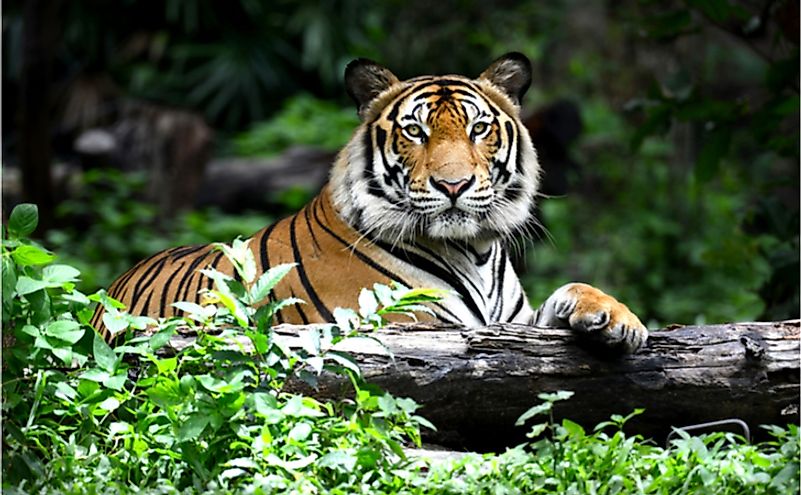 The royal Bengal tiger, which is also known as the Indian tiger or Bengal tiger, is scientifically known as Panthera tigris tigris. The largest population of royal Bengal tigers are concentrated within the borders of India. Smaller groups of the subspecies can also be found in Nepal, Bhutan, and Bangladesh. The tiger’s habitat includes tropical rain forests, tall grasses, and marshes. The animal is one of the most effective hunters in the wild. This solitary carnivore relies on a combination of stealth and camouflage to approach unsuspecting prey before launching a surprise attack. Their diet consists of water buffalo, gaur, sambar, mottled deer, wild boar, and chital. Bengal tigers are also known to occasionally attack domestic livestock and smaller prey such as porcupines and rabbits. According to the IUCN (International Union for Conservation of Nature), the species is listed as endangered. 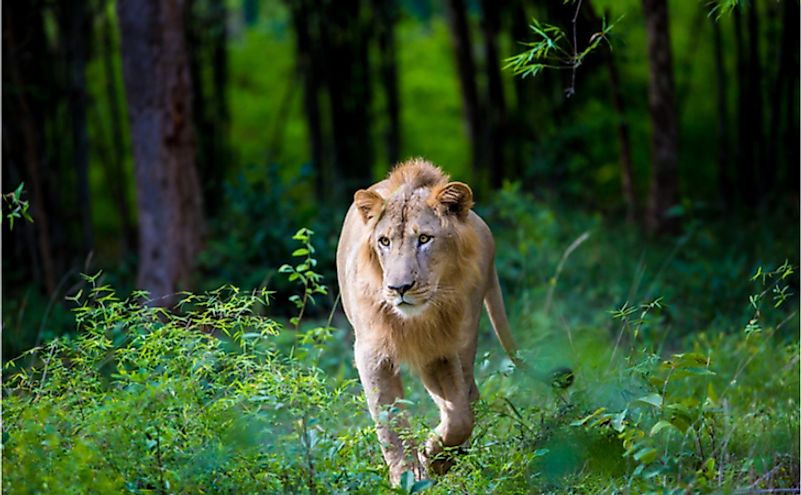 Asiatic lions, which are also commonly known as Indian lions, or Panthera Leo Leo subspecies of lions, is found only in India. According to the IUCN Red List, they are described as Panthera leo persica, which is their former scientific name. Asiatic lions once roamed vast regions throughout the Middle East and Asia and in parts of Europe such as Greece. Today there are about 600 lions restricted to the Gir National Park and a few other parts of Gujarat state in India. The lions’ habitat is restricted to remnant forests of the two hill systems of Ginar and Gir, which are the state’s primary tropical and subtropical forests, thorn forest, and savannah. The Asiatic lion is currently protected in five areas that include Girnar Sanctuary, the Mitiyala sanctuary, Gir National Park, Gir Sanctuary, and Pania Sanctuary. The diet of Asiatic lions in the Gir forest consists of chital, nilgai, sambar, buffalo, wild boar, and cattle. They are listed as an endangered species by the IUCN. 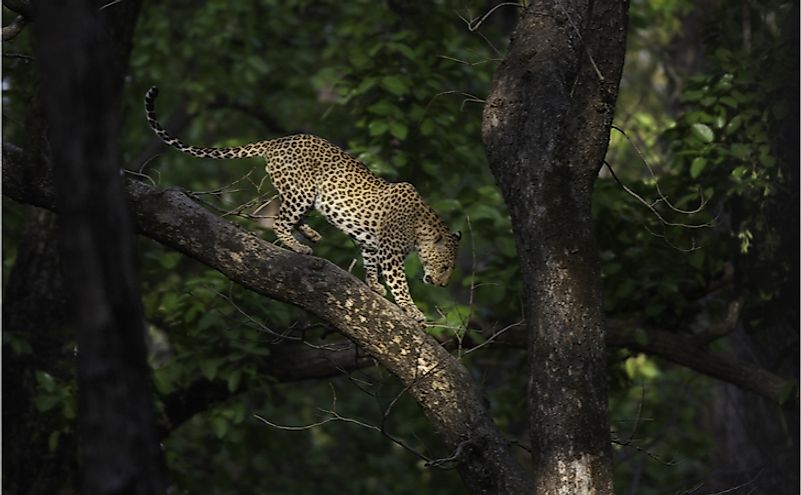 The Indian Leopard or the Panthera pardus fusca subspecies is mainly found in the Indian Subcontinent. Indian leopard populations can also be found in Bangladesh, Bhutan, Myanmar, Pakistan, Nepal, and China. Leopards are often spotted in landscapes that range from deserts to rainforests. They are found in most parts of India, including protected and even human-inhabited areas. Indian leopards can be found in deciduous forests, tropical rainforests, northern coniferous forests, and temperate forests. In western India, as many as five individuals in every 38.6 square miles can be found in areas inhabited by humans. Since they are the most common big cat around human settlements, they are frequently involved in conflicts with humans. They are solitary carnivores and feed primarily on sambar, chital, langur, spotted deer, wild pig, nilgai, porcupine, cattle, and dogs. It is important to note that black panthers are technically leopards with a rare mutation called melanism. The Panthera pardus species is currently listed as vulnerable on the IUCN Red List. 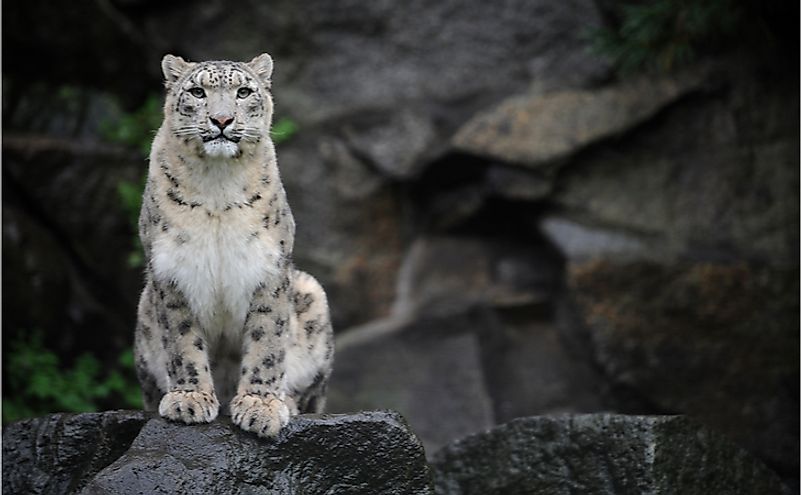 The snow leopard, which is also commonly known as Ounce and scientifically as Panthera uncia, is found in the mountain ranges of South and Central Asia. The species can be spotted in the Himalayan regions of North India in areas including Hemis National park, Gangotri National Park, and Khangchendzonga National Park. Snow leopards can be found in forests at altitudes of between 3,900 and 6,600 ft during winter and mountainous meadows and rocky areas of elevations of between 8,900 to 19,700 feet during summer. Their diet consists mainly of wild goat, argali, Himalayan blue sheep, and Himalayan tahr. The snow leopard is currently listed as vulnerable on the IUCN Red List of endangered species, with the global population estimated to be less than 10,000 adult leopards. 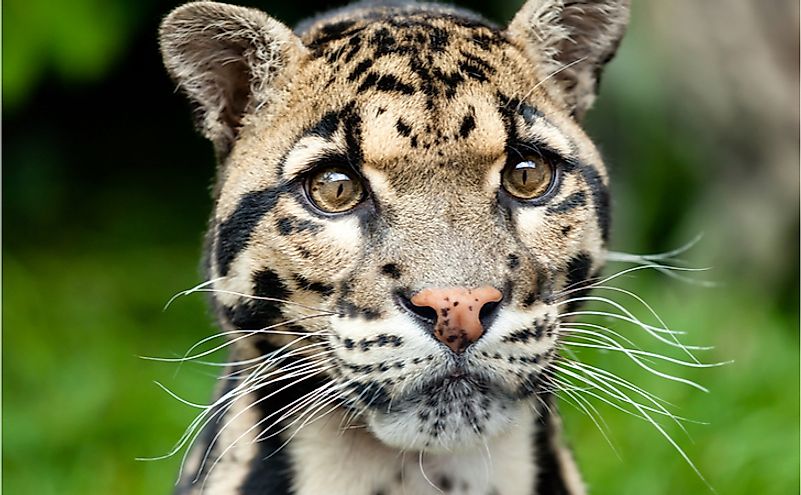 The clouded leopard is scientifically called Neofelis nebulosa. It is found in the Himalayan foothills of Southeast Asia, and parts of mainland China. They can be spotted in tropical evergreen forests and occasionally in dry and secondary logged forests. In India, they are found in the Meghalaya subtropical forests, Sikkim, Assam, Mizoram, Manipur, Arunachal Pradesh, and Nagaland. Their diet includes Indian hog deer, Bengal slow loris, Asiatic brush-tailed porcupine, and southern pig-tailed macaque. The clouded leopard is listed as vulnerable on the IUCN red list. 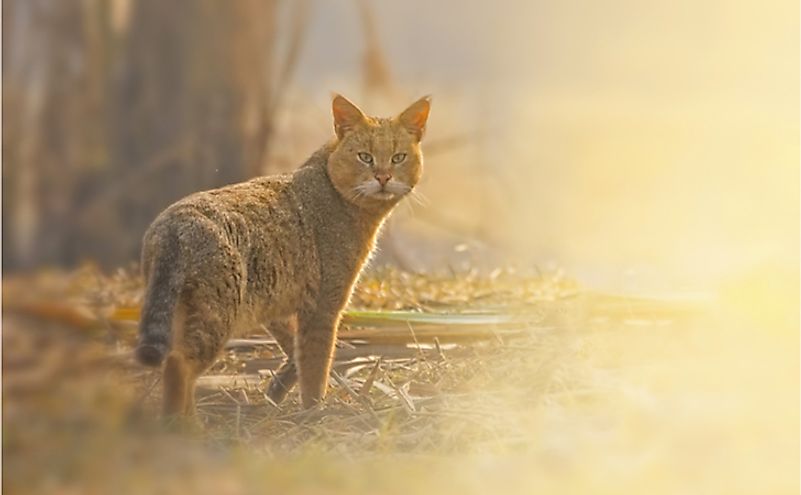 The jungle cat, which is also known as the swamp cat, is native to South and Southeast Asia, the Middle East, the Indian subcontinent, and southern China. Its scientific name is Felis chaus. Jungle cats are regarded as efficient hunters that thrive in a variety of habitats. They are found in areas with dense vegetation and adequate water, such as wetlands, swamps, grasslands, and riparian areas. Jungle cats can also be found in agricultural lands, such as sugarcane fields. They prefer consuming hares, gerbils, rodents, birds, fish, insects, and frogs. Jungle cats are listed as least concern on the IUCN red list. 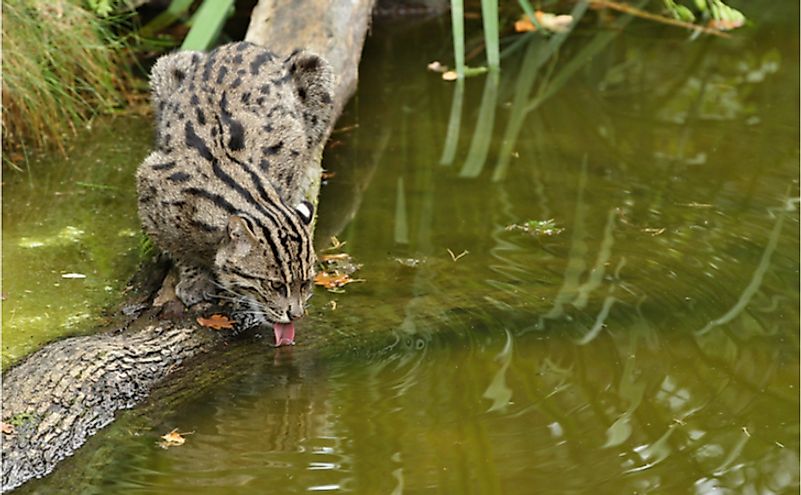 Fishing cat, scientifically known as Prionailurus viverrinus, is found in regions that are considered wetlands. Other habitats include swamps, oxbow lakes, along rivers and streams, and mangroves. They are discontinuously distributed across South and Southeast Asia. They have been reported in countries such as India, Bangladesh, Nepal, and Sri Lanka. There are good swimmers, and fish accounts for the bulk of their diet. Fishing cats can also feed on amphibians, rodents, and carrion. The species is currently listed as endangered by the IUCN. 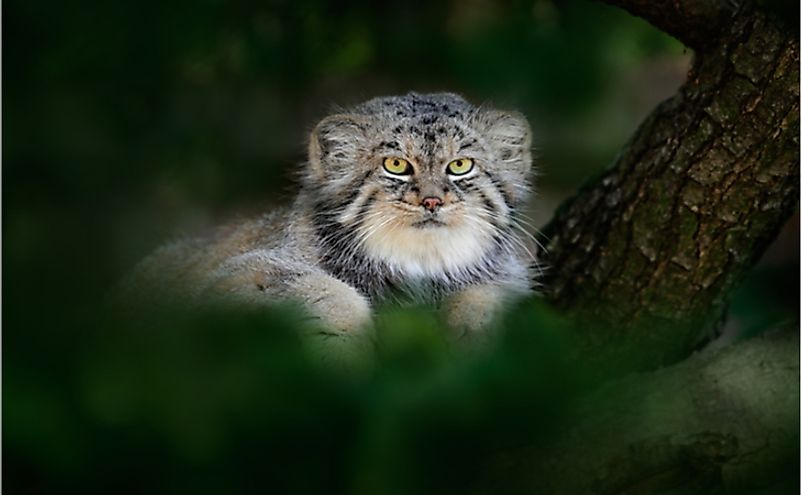 The Pallas’s cat, which is also known as manul is a small wild cat that has a shaggy appearance. The scientific name of the species is Otocolobus manul. They are found in montane steppes and grasslands of Central Asia in countries such as India, Iran, Afghanistan, Kazakhstan, Mongolia, and Pakistan. They hunt rodents and birds. The wild cat is listed as near threatened on the IUCN Red List. The main threat to the species is habitat degradation 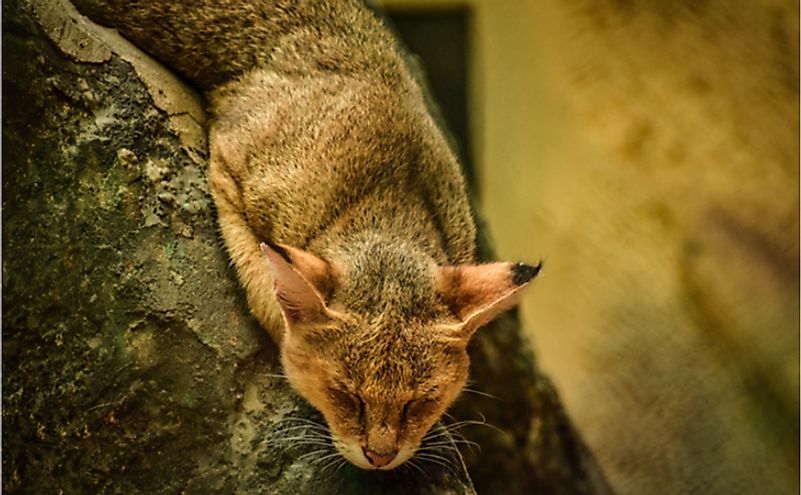 The Indian desert cat, which is also known as the Asiatic wildcat or Asian steppe wild cat, is found in western India, southern Mongolia, western China, and the eastern Caspian Sea region. The species is scientifically known as Felis lybica ornate. They can be found in low-lying deserts, scrub deserts, and semideserts areas. Desert cats feed on birds, lizards, insects, Afghan voles, red-tailed gerbils, and Tolai hares. The desert cat is currently listed as the least concern on the IUCN Red List. 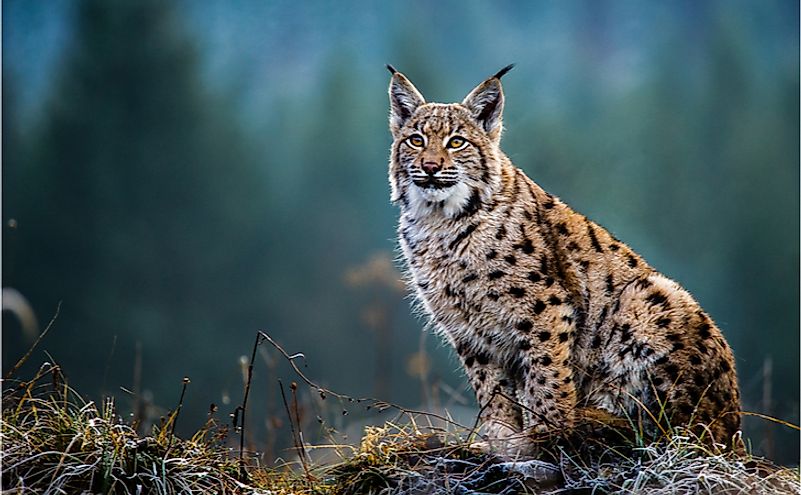 The Eurasian lynx is scientifically known as Lynx lynx. The species is found in Central Asia, Siberia, the Himalayas, the Tibetan Plateau, and Central, Eastern, and Northern Europe. They can be found in rugged landscapes that include rocky steppe, montane forest, boreal forest, and mixed forest-steppe. Their diet consists of marmots, hares, squirrels, grouse, wild boar, roe deer, chamois, and rodents. The Eurasian lynx is currently listed as least concern by the IUCN. 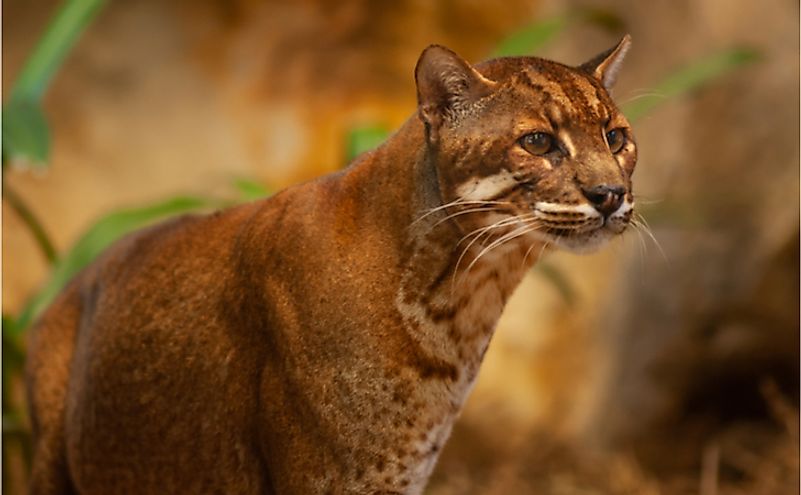 The Asian golden cat is scientifically known as Catopuma temminckii. It is a secretive cat and is native to the northeastern part of the Indian Subcontinent and Southeast Asia. Its habitat consists of tropical rainforests and dry deciduous subtropical evergreen forests. They prefer forests interspersed with rocky areas. Asian golden cats are known to hunt hares, birds, rodents, young sambar deer, and water buffalo calves. The Asian golden cat is currently listed as near threatened on the IUCN Red List. 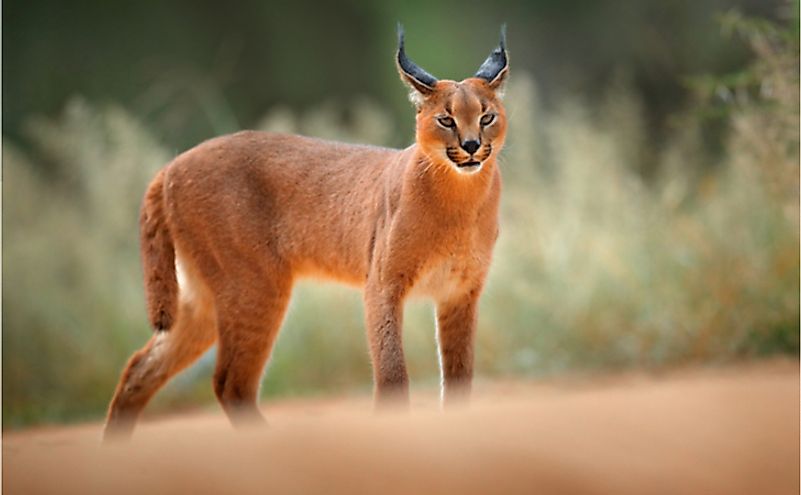 The caracal, which is scientifically known as Caracal caracal, is native to the Middle East, Africa, India, and Central Asia. The species prey on birds, rodents, and small mammals. They are found in savannas, forests, marshy lowlands, scrub forests, semideserts, and montane habitats. Caracals are classified as least concern on the IUCN Red List. 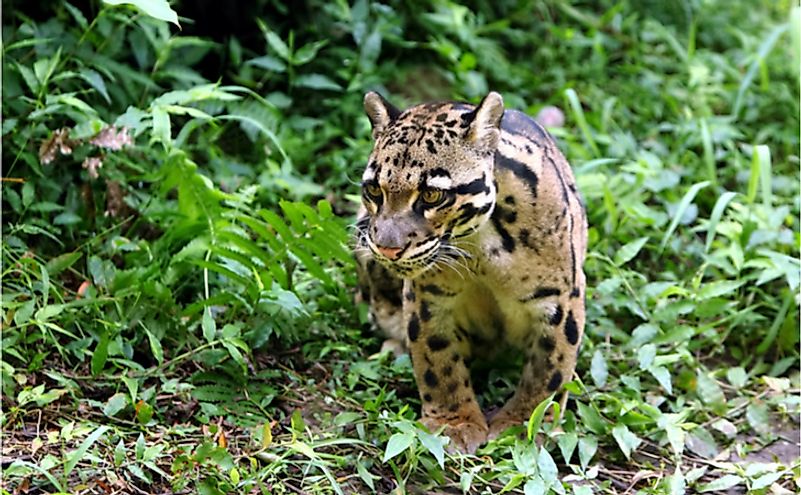 The leopard cat is a small wild cat native to South and Southeast Asia in regions that include the Amur region, China, Indian Subcontinent, Korean Peninsula, and the Russian Far East. Its scientific name is Prionailurus bengalensis. Leopard cats are classified as least concern on the IUCN Red List. They live in tropical evergreen forests, plantations, coniferous forests, and deciduous forests on the Himalayan foothills. Leopard cats feed on small mammals, birds, lizards, insects, and amphibians. 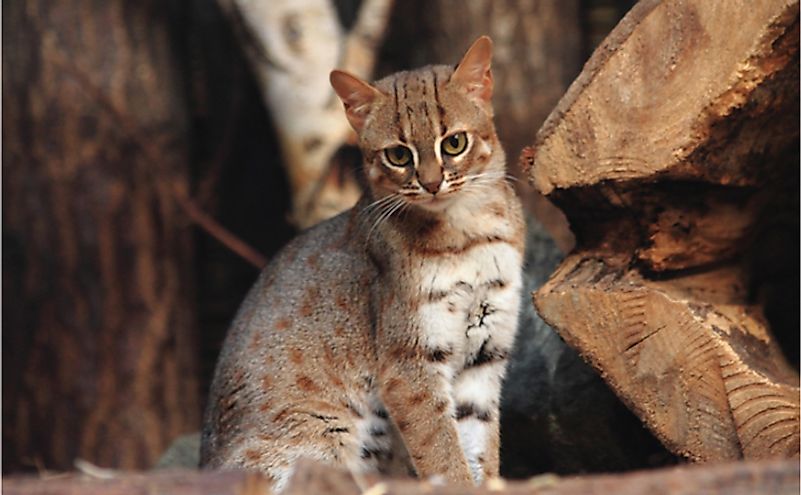 The rusty-spotted cat, which is scientifically known as Prionailurus rubiginosusis is native to Sri Lanka and India. They are found mainly in grasslands, moist and dry deciduous forests, as well as scrubland. Rusty-spotted cats feed on birds, rodents, frogs, insects, and lizards. Rusty-spotted cats are listed as near threatened on the IUCN Red List. 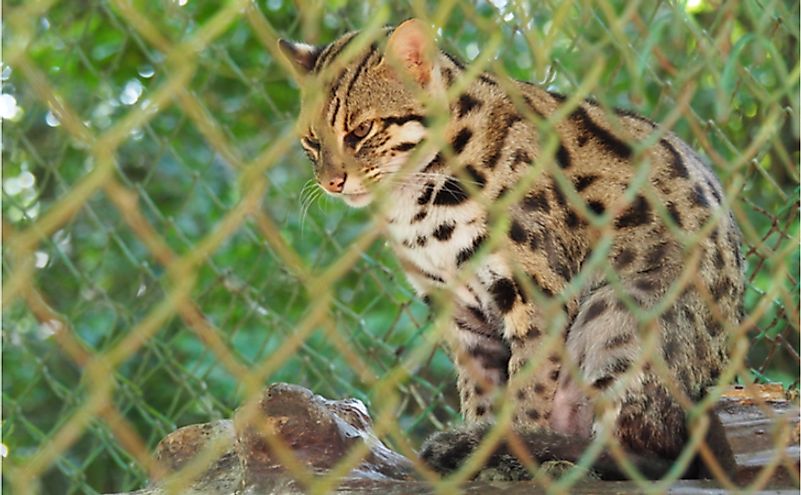 The marbled cat is scientifically known as Pardofelis marmorata. The marbled cats are native to the eastern Himalayas and Southeast Asia region, where they inhabit forested areas at altitudes of about 8,200 feet. They feed on rodents, reptiles, and birds. Marbled cats are listed as near threatened on the IUCN Red List.

This page was last updated on November 20, 2019.
By Benjamin Elisha Sawe