Snow leopards are large wild cats native to the mountainous ranges of South and Central Asia. The global population of this species is estimated to be less than 10,000, and it is projected that it could reduce by 10% by 2040. The IUCN has listed the snow leopard as vulnerable, and most of the threats are a result of habitat loss due to development of infrastructure and poaching. The snow leopard is found in sub-alpine zones at altitudes ranging between 9,800 feet and 14,800 feet above sea level.

Distribution And Habitat Of The Snow Leopard

Snow leopards are found at high altitudes in countries such as Russia, Uzbekistan, Tajikistan, Kyrgyzstan, Kazakhstan, Afghanistan, and Pakistan, among others. They are widely distributed in the Himalayas in Bhutan, Nepal, and India as well as the Tibetan plateau. In Mongolia, the snow leopards are found in Kanghai Mountains and Gobi Altai mountains. The habitats of the snow leopard in the Indian Himalayas is approximately less than 35,000 square miles, particularly in the States of Arunachal Pradesh, Sikkim, Himachal Pradesh, Uttarakhand, and Jammu and Kashmir, where 13,000 square miles is regarded as an optimal habitat range. In the 1990s, the snow leopards in India were estimated to be between 200 and 600 individual animals living in 25 different protected areas. During summer, snow leopards are typically found above the treeline, particularly in the rocky regions and alpine meadows of altitudes ranging between 8,900 and 19,700 feet above sea level. During winter they are found in relatively lower altitudes ranging between 3,900 and 6,600 feet above sea level. The snow leopards can move quickly without any difficulty in the snow covering a depth of 33 inches, but they always prefer using the existing trails which have been made by other animals.

Snow leopards have unique adaptive features which have enabled them to live and thrive in their unique environment. One such adaptation includes respiratory features which are well adapted to high altitude where thin-air exists. Their chest or lungs and their nasal cavities have evolved over the years to suit their environment. They have robust muscles around the chest, which allows the snow leopard to outpace their prey. They are also capable of traveling up to 27 miles across deserts in a single night. The nasal cavity of a snow leopard is large enough and has a unique ability to warm cold inhaled air before it reaches its lungs. The lungs of the leopard do not get cold due to this unique adaptation, and as a result, the leopard does not get weaker or slow down because of the cold air outside its body. A thick fur is not of much help if the animal becomes cold inside out, and therefore this adaptation is critical for the survival of the snow leopard in frigid regions. 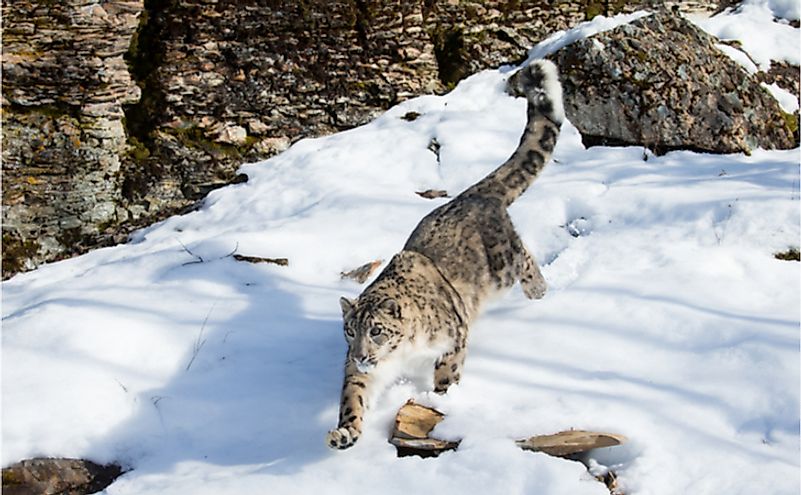 Snow leopards have very powerful legs, particularly their hind legs. If the snow leopard did not have sturdy legs, it would not be able to climb and maneuver the rocky terrain and cliffs of its habitat. It is for this reason that the snow leopards can jump high and cover long distances of up to 45 feet when it leaps forward. The front legs of the leopard are nimble and agile, and they are much shorter compared to their hind legs. This physique allows the leopard to land jumps easily and allows the animal to balance. The snow leopard’s shoulders are also sturdy and enable the animal to overcome larger prey and drag them to safety. Their paws are large, which is about two to three times wider compared to an average human hand, and these acts as snowshoes. Such large paws enable the snow leopard to balance when it is on top of deep snow or rocks. Their paws also have very thick skin that protects the animal from sharp rocks from cutting into their feet. Besides, the snow leopards have large claws which enable them to take down large prey that could be up to three times their body size. Such huge claws come in handy as well when they are defending their territory.

The snow leopards have a unique creamy color with dark brown and light spots. This combination of colors allows the cat to blend with the mountain environment to avoid detection when hunting or from being detected by other larger animals which could attack them. They also have very thick fur that provides warmth in the chilly environment where they live. The leopard’s fur is long and could reach about five inches. Besides, the snow leopards have very sharp eyesight, and it has been found that they are capable of seeing six times much better than an average human sight. The snow leopards, like all other cats, have excellent night vision. Their impressive performance on eyesight helps them to watch for threats and when they are hunting for prey.

The snow leopards have excellent hearing capabilities, and their ears are short and rounded. These cats are capable of flattening their ears to lie flat against their heads, which allows them to hide when they are stalking their prey. This is one essential adaptation which is critical for hunting. They also have an elegant and equally long tail that reaches more than three feet long. The long tail comes in handy to balance the body of the snow leopard when it is running or walking on precarious locations. Their tails also have thick fur of about 5 inches, and this helps the animal to keep warm. During freezing nights, the snow leopard wraps its tail around its body to increase warmth.

Fascinated by felids? Learn about the World's 10 Most Threatened Wild Cats in this article.

This page was last updated on September 20, 2019.
By Benjamin Elisha Sawe