The natural bridge is a national monument situated approximately 50 miles northwest of the 4 Corners boundary of the southeastern Utah, right at the junction of Armstrong Canyon and White Canyon in the United States. The monument features the 13th largest natural bridge in the Globe which is engraved from Permian sandstone of Cedar-Mesa Formation. The park has three bridges named Sipapu, Owachomo and Kachina.

The national monument has three long natural bridges which were molded by soil erosion process. The destructive forces of rain and wind, freezing temperature and running water attacked the uplifts soon after the tectonic havoc began in the Lake Cretaceous, which resulted in the uplifting of the Colorado Plateau by approximately 12,000ft. Owachomo Bridge is 106 ft high, 180 ft long, 27ft wide and 9 ft thick. The Kachina Bridge is 93ft wide, with a length of 204 ft, a width of 44 ft and the bridge is 210 ft high. The Sipapu Bridge is 225ft long, 53ft thick and 31ft wide with a height of 220ft. 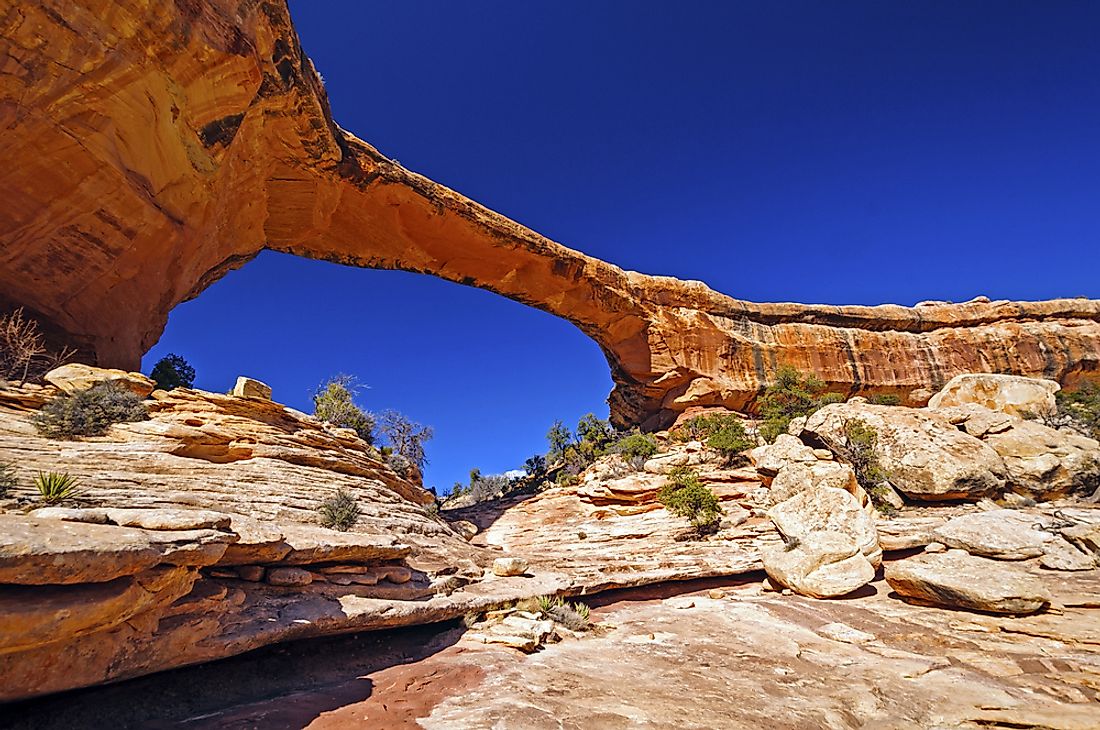 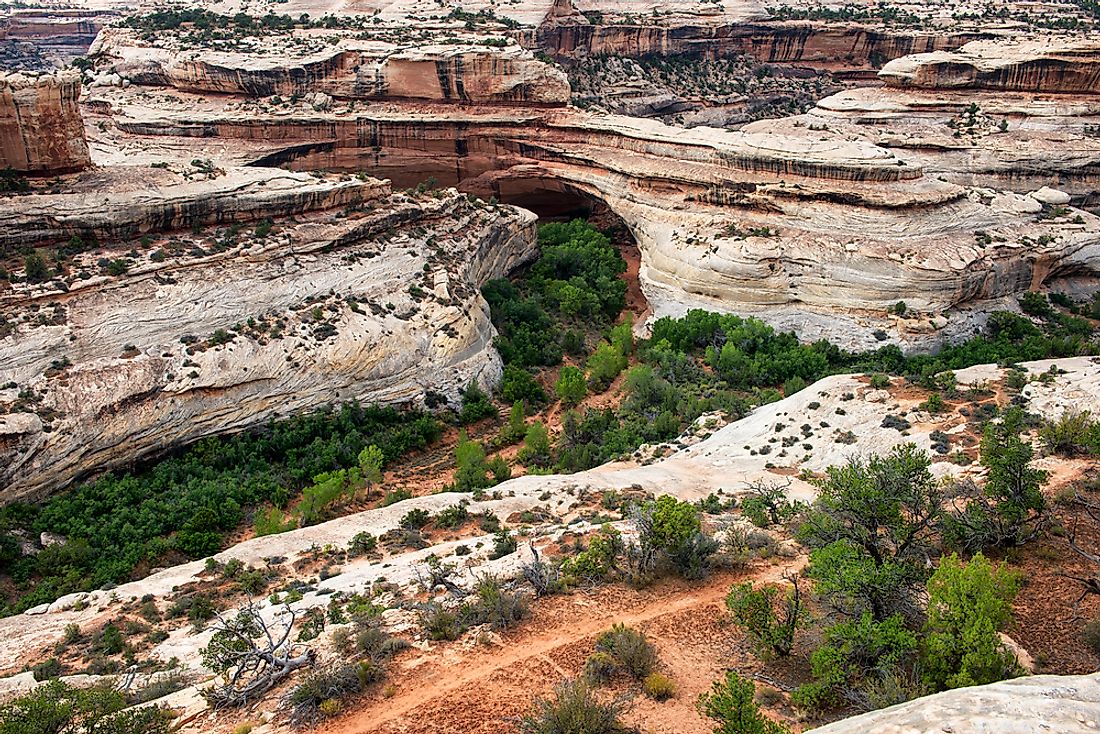 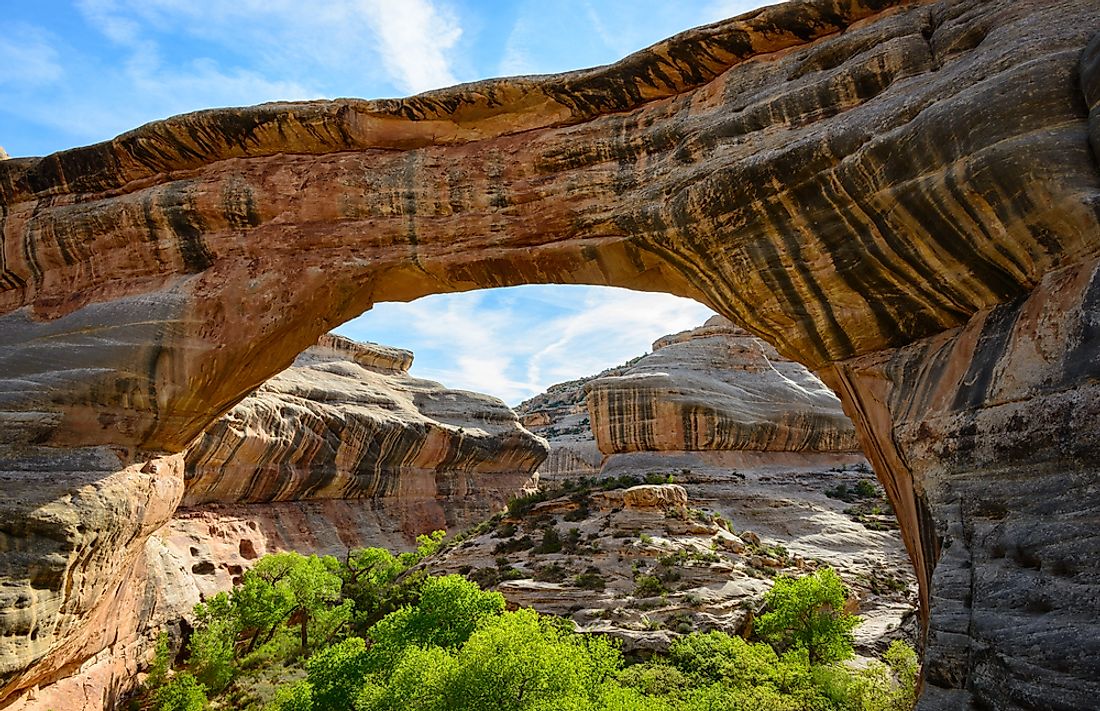 The main attraction in the park are the three natural bridges which can be accessed from the Bridge-view drive that stretches through the park and also leads to the bridges or by the trails which lead to the base of the three bridges. The park has numerous picnic areas, and camping grounds plus the electricity used in the park comes from the massive solar array located near the visitors’ center.

The Darkest Skies in the Country

The names of the three bridges Sipapu, Owachomo, and Kachina are all Hopi names. The international Dark-sky organization acknowledged the fact that this park has the darkest skies in the country in 2007. The park has put a lot of effort into conserving the naturally dark sky as a resource which is worthy of protection. A night sky team monitors the night sky in the park from the National park service, and they rated it a class 2 on their Bortle Dark-sky-scale making it the darkest sky ever assessed.

What Species of Plants and Animals Live in the Park?

The native species of plants present in the park include cottonwood, ponderosa pine, Douglas fir, and juniper. Some of the shrubs in this area include Manzanita, dwarf oaks, rabbitbrush, Mormon tea, yucca, apache plume, buckwheat and bayberry among others. Some of the different animal species present in the national museum include birds like canyon wren, turkey and Pinyon jay and mammals like bobcats, mountain lion, mule deer, bears, coyotes and pack rats among others.

The potential collapse of the bridge at the National bridge monument is possible, especially along the length of Owachomo bridged near Armstrong Canyon which is approximately 9ft thick at the peak of the span. The potential for an earthquake is quite high along the Moab faults which are in Arches National park. Although the Moab fault and other faults in the Paradox-Basin are linked with salt structures, the interior part of the Colorado Plateau has low-level of Seismic-hazards. Ground shaking caused by an earthquake can impact the bridges causing a disastrous failure of the Bridges.

This page was last updated on December 12, 2017.
By Geoffrey Migiro