India is currently home to 70% of the world’s tiger population. According to a census conducted in 2018, the tiger population in the country rose to 2,967 in 2018 from 2,226 four years earlier, representing a 33% increase in population. The findings of the census were announced in 2019 by Prime Minister Narendra Modi, who hailed the “historic achievement.” The count took 15 months and utilized up to 26,000 camera traps that took about 350,000 images in various tiger habitats in the country. The exercise also involved forestry and wildlife officials who crisscrossed 146,719 square miles of terrain to accomplish the task. Tigers were nearly driven to extinction between the 19th and early 20th centuries by hunters and poachers. Experts estimate that hunters between 1875 and 1925 alone killed almost 80,000 tigers.

The state of Madhya Pradesh is home to 526 Bengal tigers spread out across six tiger reserves, including Kanha, Panna, Bandhavgarh, Pench, Satpura, Dubri, and Sanjay. Madhya Pradesh had seen a significant increase in tigers since 2014 when the tiger population was just 308. The state has, however, been criticized for high death rates in its tiger population. Between 2012 and 2017, Madhya Pradesh accounted for over 21% of tigers that died across the country. According to a report from Conservation Lenses and Wildlife (CLAW), the leading causes of tiger death in the state were electrocution, poisoning, territorial fights, and natural deaths.

The state of Karnataka is well known for its rich biodiversity. It is currently home to an estimated 524 Bengal Tigers as well as the largest population of wild elephants in the country. The tiger population has been growing steadily since 2006 when the state had just 290 tigers. In the 2014 census, the state held the top spot ahead of Madhya Pradesh with 406 tigers but has since been overtaken. 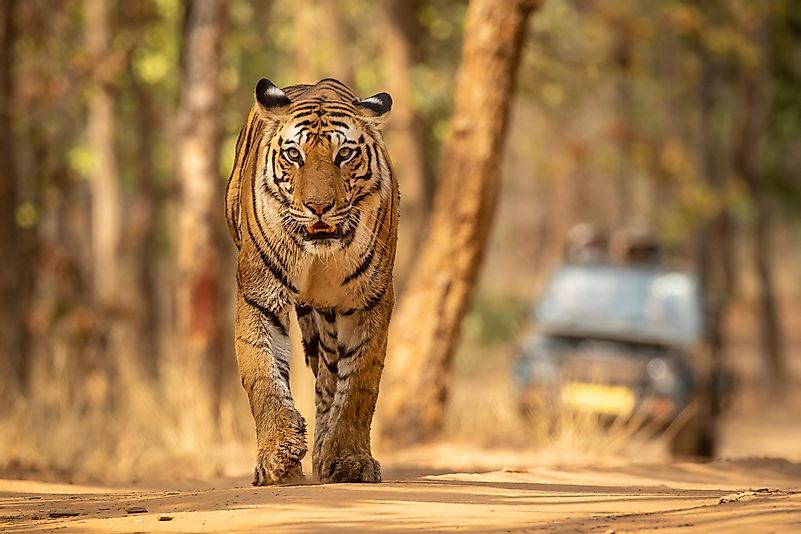 The state of Maharashtra has nearly doubled its tiger population since 2010. The state currently has 312 tigers up from 168 recorded in 2010. Some of the reasons behind the increase in the tiger population are the successful village relocation policy, recruitment of diligent wildlife staff, and zero-tolerance towards wildlife trade and poaching. Experts have warned that the state is likely to experience a rise in human-wildlife conflict outside protected areas. A recent study found that tigers outside protected areas were moving in the cover of night in search of new territory in areas mainly occupied by humans. In 2018, the state had the highest rate of human mortalities related tiger attacks at 45%.

The tiger population in Tamil Nadu has grown steadily from just 76 tigers recorded in 2006 to 264 tigers in 2018. The state has three biosphere reserves and five national parks that provide suitable habitat to several endangered species, including the Bengal tiger, Indian Leopard, and Indian elephant. Between 2013 and 2018 total of 49 tigers deaths were reported in the state, and 22 of them were attributed to natural deaths, while ten were as a result of poaching. The rest died as a result of accidents. The statistics show that additional measures need to be taken to protect the tiger population in the state.

Over the years, Assam has witnessed a steady increase in its tiger population. The state currently has 190 tigers up from 167 tigers recorded in 2014. The increase points to a healthy prey base and the proactive role of enforcement agencies. Protected areas in the state include the Manas, Pobitora, and Nameri wildlife reserves, Dibru-Saikhowa National Park, and Kaziranga National Park.

The tiger population in Kerala increased from 136 in 2014 to 190 in 2018, representing a 40% increase over four years. The success can be attributed to intensive habitat management initiative, anti-poaching programs, voluntary relocation of people living in the forest, and the construction of check dams that ensure the availability of water in the forests. Some of the notable wildlife reserves in the state include the Periyar Tiger Reserve and the Parambikulam Reserve.

The tiger population in Uttar Pradesh has soared from 117 in 2014 to 173 in 2018. The state has three principal tiger reserves, and they include Pilibhit, Dudhwa, and Amangarh. In 2006, Dudhwa was considered the second-best tiger reserve in India after Jim Corbett. It, however, gradually lost its charm when no significant increases in the tiger population were recorded in the subsequent years. The situation later changed under the leadership of the former deputy director PP Singh who effected a ban on human entry into sensitive wildlife areas.

The tiger population in Rajasthan has more than doubled since 2006 when the tiger population was 32. Currently, there are approximately 69 tigers in the state. In the Central India region and Eastern-Ghats, an area covering eight states, Rajasthan ranks third in the tiger population after Madhya Pradesh and Maharashtra. Rajasthan has three tiger reserves, and include Sariska Tiger Reserve, Ranthambore Tiger Reserve, and the Mukundra Hills Tiger Reserve. The state’s forests department is considering developing more habitats to minimize the recurring incidents of human-wildlife conflict. The department is looking to introduce tigers in forested areas such as Ramgarh Vishdhari, Rawli Toadgarh, Shergarh, Kumbhalgarh, Jhiri, Khetri, Sultanpur, and Shahbad.

According to the last census, there were 31 tigers in the state of Bihar. The tigers were concentrated in the Valmiki Tiger Reserve (the only tiger reserve in the state). State officials have identified forests in Kaimur as a possible site for a second tiger reserve. The new reserve is meant to ease the burden on the Valmiki Tiger Reserve, which is nearing its maximum capacity of 50 tigers. The state is planning on improving the habitat in the area and establishing a security framework for tiger conservation and protection before sending a formal proposal to have the area declared as a new tiger reserve.

Arunachal Pradesh And Other States

Tiger conservation in Arunachal Pradesh has had its fair share of ups and downs. In 2006, the tiger population in the state was 14, and four years later, the state did not record a single tiger in its territory. In 2014, only 28 tigers were sighted. The number later rose to 29 in 2018. State forest officials have attributed the turnaround to improved protection of tiger habitats and the use of scientific mapping technology. Other states with a tiger population above ten are Odisha and Chhattisgarh, with 28 and 19 respectively. Jharkhand and Goa had five and three tigers, respectively.

India’s protected areas have been unable to expand at the same rate as the tiger population. Some big cats have, therefore, been forced to turn to areas with human settlements for survival. As a result, tigers have been blamed for the death of livestock and people in areas bordering reserves. In some places, traditional tolerance is beginning to wear thin, leading to riots and tiger killings. While the majority of tigers are not man-eaters, a growing number of people are beginning to look negatively on tiger conservation. To protect the rest of the tiger population for retaliatory attacks, experts suggest putting down man-eating tigers before they kill again to keep the peace. Some animal rights groups are, however, opposed to the move. Trapping of the man-eaters for translocation or confinement in fenced areas has been proposed as an alternative method to stop the menace.

This page was last updated on January 30, 2020.
By Benjamin Elisha Sawe