Insectivorous or carnivorous plants trap and digest insects and small animals for nutrients. The adaptation develops due to the nutrient-poor soil conditions in which they grow. The following are some fascinating carnivorous plants. 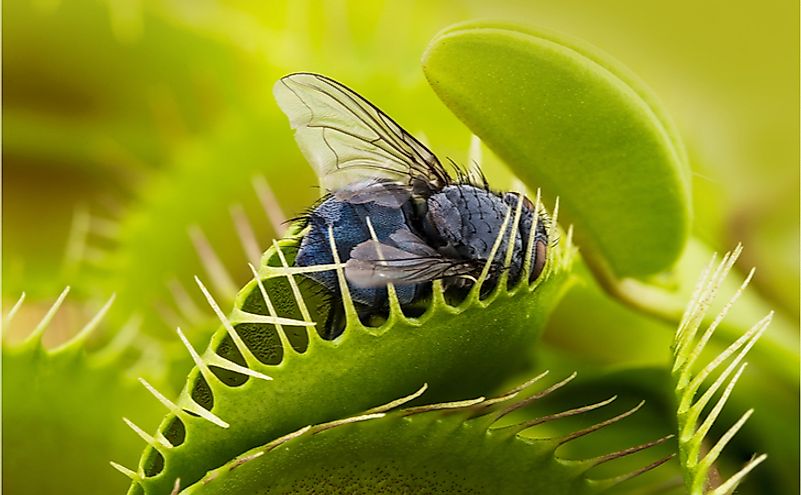 The Venus flytrap is native to South and North Carolina. It is a small flowering plant that traps insects using circular lobes at the end of the leaves. Tiny sensory hairs stimulate the lobes when an insect touches the plant, prompting the leaves to snap shut. The leaves secrete a red sap that digests insects in about a week.

The waterwheel plant is found in Africa, Europe, Australia, and Asia, but it has been listed as endangered by the IUCN. The plant employs the snap-trap mechanism to trap small insects and aquatic animals. Two lobes enclose prey as soon as they make contact and stay shut until the insect is fully digested. 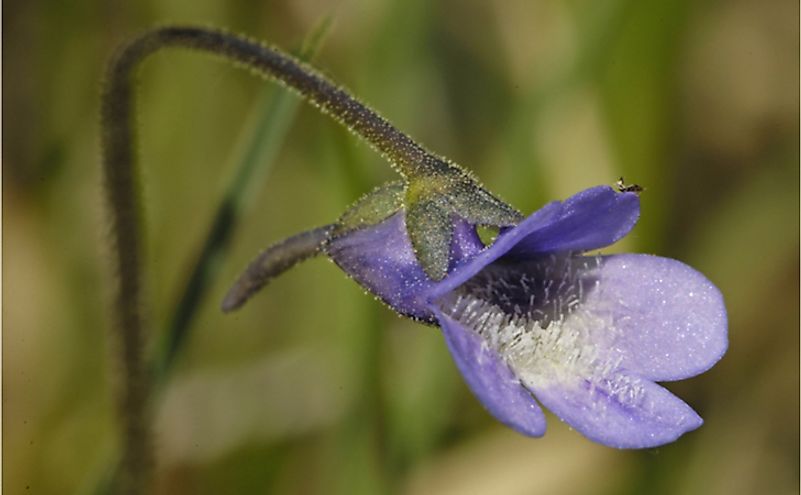 The common butterwort is common in bogs and fens. It secretes a sticky fluid that lures insects to its glandular leaves, which slowly curl as soon as the insects make contact. After a full curl, the leaves secrete an enzyme that digests the prey and absorbs nutrients. The plant is found in North America, Siberia, as well as South and Central America. 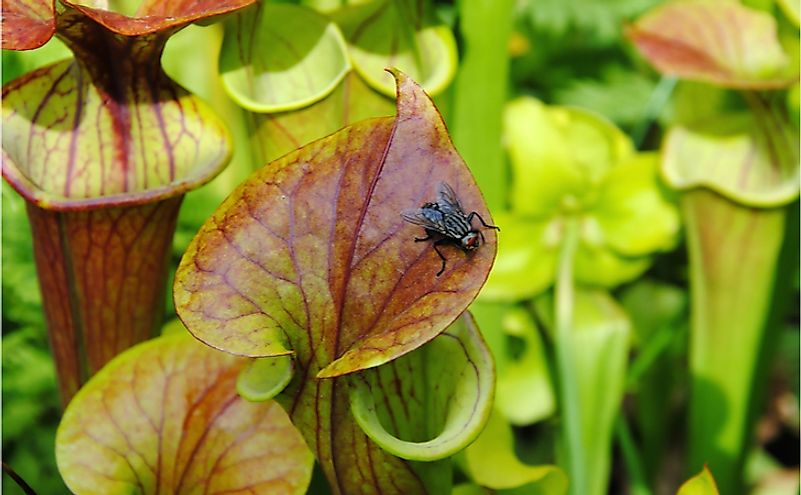 The yellow pitcher plant resembles a pitcher, urn, or trumpet. It secretes a sticky nectar-like fluid into a trumpet-shaped leave that attracts insects causing them to drown. It is native to North America and can be found in Southern Alabama, Florida, Georgia, southern Virginia, and the Carolinas. It is an easy plant to cultivate and can, therefore, be found in gardens and backyards. 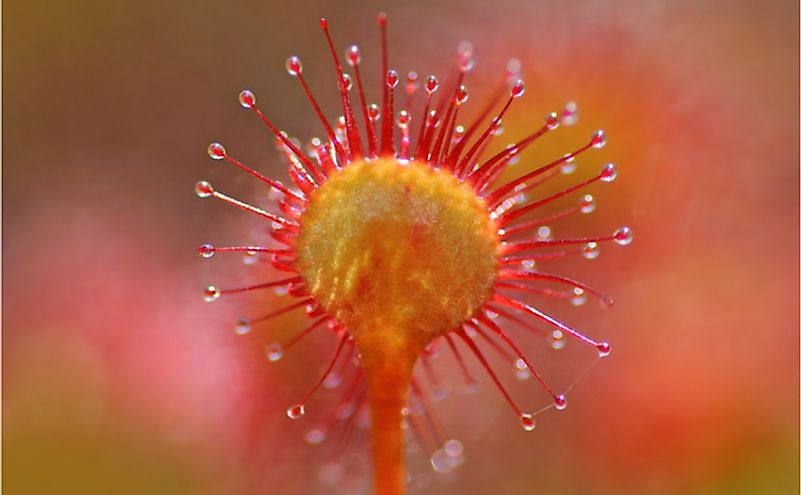 The roundleaf sundew, also known as the common sundew, is a species of the sundew that is common in fens, bogs, and marshes of northern Europe, Siberia, North America, Japan, and Korea. The plant uses glistening drops of sticky nectar-like mucilage to attract insects. It then secretes an enzyme that extracts nutrients and ammonia from the decomposing body. Ammonia replaces nitrogen that is absorbed by other plants from the soil.

Bladderworts are a genus of carnivorous plants with over 230 species. They are found across all continents except Antarctica. Bladderworts thrive as terrestrial or aquatic plants. Despite their small size, their capture strategies are different and far more complex than the Venus flytrap and similar plants. Bladderworts do not respond to stimuli but instead pumps out water creating a vacuum that consequently sucks in small organisms such as young tadpoles, mosquito larvae, water fleas, and nematodes. 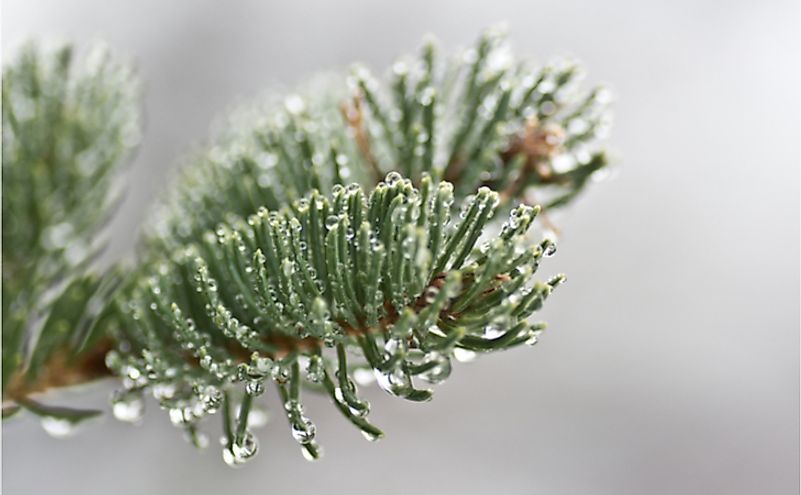 The dewy pine is among the few carnivorous plants that grow outside wet conditions. It is found in the dry regions of Spain, Morocco, and Portugal. The plant secretes a fluid with a honey-like smell that draws in prey, which is then trapped by the sticky leaves. A digestive enzyme breaks down the insides of the insect, leaving behind a dark, dry shell. 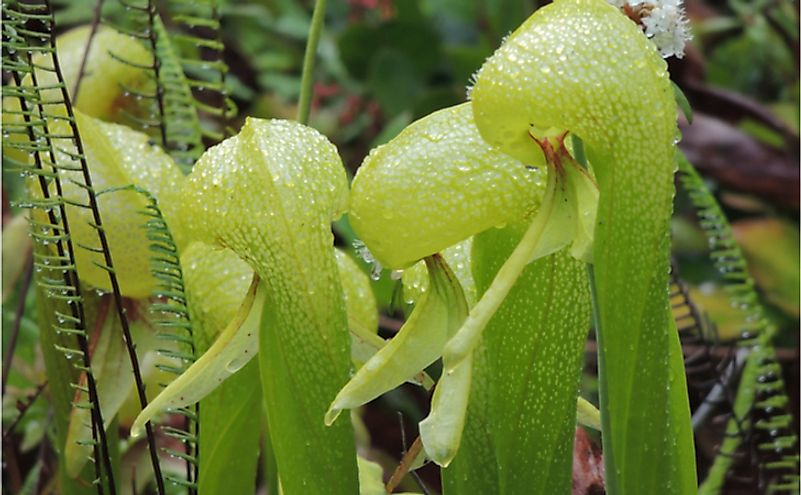 The cobra lily is common in Oregon and California. The plant received its name from its hooded leaves that resemble fangs and tongue of the cobra snake. Nectar glands lure potential prey, which is then trapped by the leaves. The colorless and translucent patches of the leaves confuse the insects while the slippery walls and dense layer of hair prevent it from escaping. 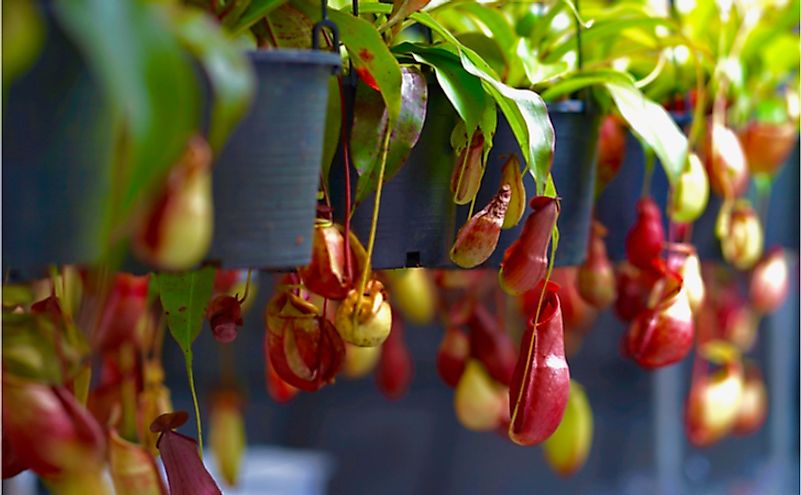 The monkey cup plant is found in Malaysia, the Philippines, Madagascar, Indonesia, Borneo, Sumatra, and Australia. They attract insects using sweet nectar, fragrance, and color before trapping them using pitfalls with lids. Larger monkey cups are capable of capturing small vertebrates such as rats, mice, and lizards.

Brocchinia reducta is a species of the Bromeliaceae family and one of the three bromeliads that trap insects. It is found across Guyana, Colombia, Brazil, and Venezuela. The plant has a tall, water-filled tubular whorl of light green leaves that capture insects. It does not produce digestive enzymes and therefore depends on bacteria to digest decomposing insects.

This page was last updated on October 15, 2019.
By Victor Kiprop