Located in East-Central Africa, Uganda is a country that features diverse habitats including tropical rainforests, mountains and hills, woodlands, swamps, freshwater lakes, savannas, and woodlands. These habitats provide ecosystems for various animals to thrive. For examples, Uganda's 13 wildlife reserves and ten national parks are home to more than 340 species of mammals, 1,000 species of birds, 142 reptiles, 86 amphibians, and more than 500 types of fish. More than half of the world's remaining 1,000 mountain gorillas live in Uganda’s Bwindi Impenetrable National Park, which is also a sanctuary for chimpanzees and colobus monkeys. Queen Elizabeth Park is inhabited by several mammals, including hippopotamuses, buffalos, leopards, and lions, in addition to chimpanzees and Nile crocodiles. Kibale National Park is famous for its primates, including the Ugandan red colobus, L’Hoest’s monkey, and Uganda mangabey. All of Uganda’s parks and reserves are protected from human encroachment and environmental degradation, but poaching, climate change, and pollution remain significant threats. The following are some of the animals that inhabit Uganda.

The African elephant is the largest terrestrial animal on the planet, and both the bush and forest elephants are found in Uganda. The population of these animals declined from more than 30,000 individuals in the 1960s to less than 3,000 by the 1980s due to poaching. Today, there are approximately 5,500 elephants in Uganda. Queen Elizabeth National Park has the largest elephant population in the country (2,900), while other populations exist in Murchison Falls National Park (1,340) and Kibale National Park (490). The population of elephants in Uganda could be higher since some herds migrate between Uganda, the Democratic Republic of the Congo (DRC), and Rwanda. The recovery of the species is attributed to conservation efforts by the Uganda Wildlife Authority, political stability, and improved legislative policies.

The Cape buffalo is the most abundant of the Big Five game animals, which also include the lion, leopard, elephant, and rhinoceros. The buffaloes live in herds of up to 600 individuals, and are formidable animals with bulky bodies and armored horns. When attacked, cape buffalo run or stand their ground against attackers. Both the savannah and forest buffalo are found in Uganda. Although males and females may coexist in a herd, young males tend to isolate themselves from the dominant bull and form separate bachelor herds. Female cape buffalo give birth during the rainy season, when the ecosystem is lush with vegetation and predators have alternative prey. Buffaloes inhabit all national parks of Uganda. 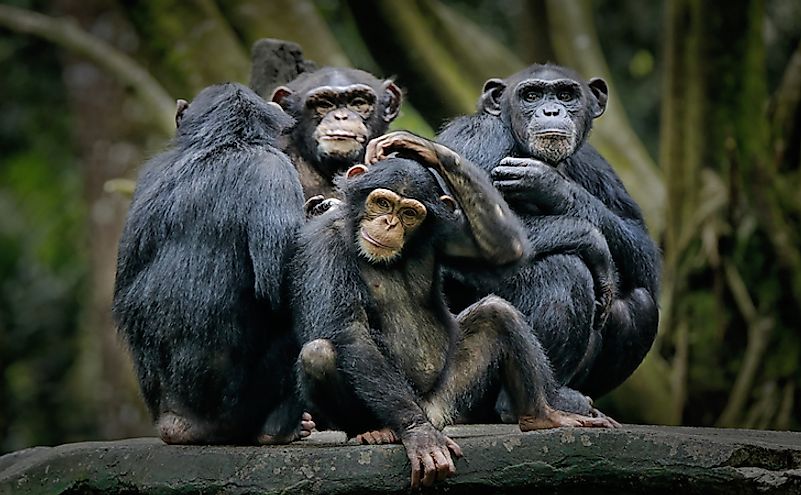 There are between 170,000 and 300,000 chimpanzees remaining in the wild, which is a relatively small number considering that they are the closest animals to human beings. The number of chimpanzees is declining globally, and over the past 20 years, their population in the Ivory Coast has reduced by more than 90%. The Democratic Republic of the Congo (DRC) has the most chimpanzees, while Uganda is home to approximately 5,000 individuals. Over three thousand Chimpanzees inhabit the forests reserves of Maramagambo, Bugoma, Budongo, Kasyoba-Kitomi, and Kibale National Park.

The crested crane is the national bird of Uganda, and is featured on the country's coat of arms and national flag. The cranes tend to inhabit rivers, lakes, and marshes across the country. Although the birds are found throughout Africa, those in the north often migrate to East, Central, and South Africa during the driest months, while those in wetter regions do not migrate. The crested crane is a resilient bird that can adapt to changing environments, but is threatened by the degradation of its natural habitat, especially the swamplands. The species was declared endangered in 2012. 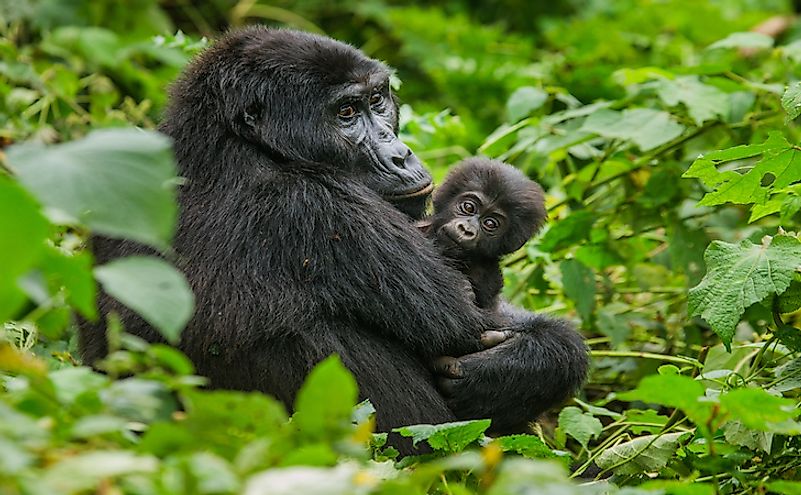 The mountain gorilla is a subspecies of the Eastern gorilla. There are only two wild populations, one in the volcanic Virunga Mountains in Central Africa, and the other in Uganda’s Bwindi Impenetrable National Park. The mountain gorilla was listed as an endangered species in 2018. There are about 100 mountain gorillas in the wild, half of which are in Uganda. The gorillas cannot survive in captivity since they require extensive habitats to feed and breed. Mountain gorillas in the Congo and Uganda are heavily protected due to the risk of poaching. In the 1950s and 1960s, there were approximately 30,000 gorillas in Central Africa, but political instability in the region exposed the animals to widespread poaching.

There are approximately 7,000 hippos in Uganda, primarily in Queen Elizabeth National Park, Murchison Falls National Park, Lake Mburo National Park, and Semiliki National Park. A large concentration exists near the Ntungwe River and the Kazinga Channel that connects Lake Edward to Lake George. The hunting of hippos is banned in Uganda, but in the 1960s the population was so high that hunting the animal for food was permitted. Murchison Falls on the Nile River also provides a suitable habitat for the mammals to thrive. Hippos are herbivores, but kill more people than leopards and lions combined. Deadly encounters usually occur along the banks of rivers and lakes, where people draw water.

The lion is considered the king of the jungle, but its reign is not likely to last for another century, since the animal may become extinct if the trend in its population continues. In the early 1900s, there were more than 100,000 lions in Africa, but today there are less than 25,000. Despite conservation efforts, the population of lions in Uganda continues to decline at an increasing rate. As of 2019, there were about 400 lions, compared to 600 the previous decade. Queen Elizabeth, Murchison Falls, and Kidepo Valley National Parks are home to 95% of Uganda’s lions. The Ishasha lions of Queen Elizabeth National Park are one of the two lion populations famous for climbing trees, while the other inhabits Lake Manyara National Park in Tanzania.

There are 29 species of antelope in Uganda, including the eland antelope, which is the world’s largest. Other species include the greater kudu, shaggy waterbuck, and Jackson’s hartebeest. The semi-aquatic sitatunga antelope spends much of its time in the papyrus swamps, while the more common Grant’s gazelles live in large herds on the plains. The Uganda Kob is the country's national antelope, and is depicted on Uganda's coat of arms. 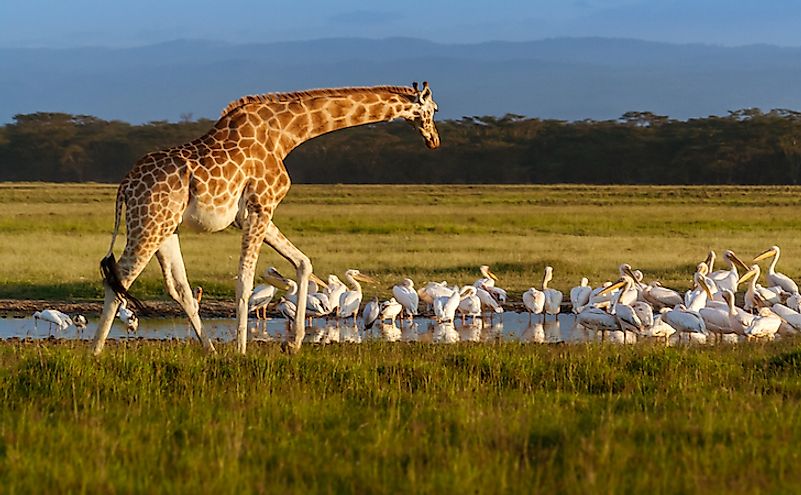 The Rothschild giraffe, also known as the Uganda giraffe, is the tallest species of giraffe. Wild populations are only found in Uganda and Kenya, although numerous individuals live in zoos across the world. The species is classified as vulnerable due to its limited range and population, and only about 1,700 Rothschild’s giraffes remain in the wild.

This page was last updated on December 12, 2019.
By Victor Kiprop