Laos is a country in Southeast Asia bordered by China, Cambodia, Vietnam, Thailand, and Myanmar. It possesses fascinating vegetation with almost half of its woodlands covered in the evergreen tropical rain forest. This extensive habitat unique to Laos enables her to be home to a wide range of diverse animals. One of the country’s nicknames is the "Kingdom of a Million Elephants". Besides elephants, some other Laotian animals are discussed below;

The water buffalo, also known as the domestic water buffalo, is scientifically known as Bubalus arnee. It is a large bovine animal weighing around 400 to 500 kg. This animal inhabits Laos and the rest of southern Asia. Domestic water buffalos are much smaller in size compared to the wild water buffalo. They are majorly kept for their milk, meat, and hides. Additionally, dried water buffalo dung is also used as fertilizer and fuel. This domestic animal also helps in plowing rice fields and transportation. Water buffalos feed mainly on grass and herbs. They spend most of their day submerged in the muddy waters. 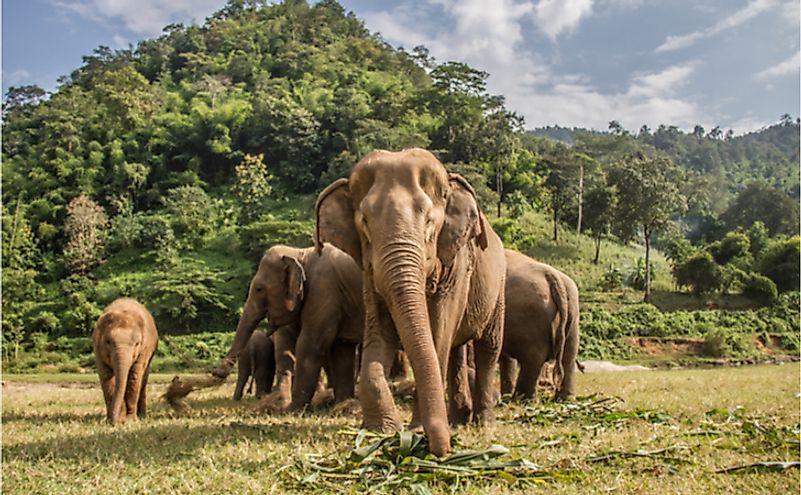 In the past, Asian elephants were so abundant and famous in Laos that the country was nicknamed “Prathet Lane Xane” which means the land of a million elephants. However, the population of the elephants has currently dropped to about 700 wild elephants and 570 domesticated elephants due to poaching and logging. Scientifically called the Elephas maximus, the Asian elephants are Asia’s largest surviving terrestrial mammal. They have a lifespan of 48 years and often live in the forests. 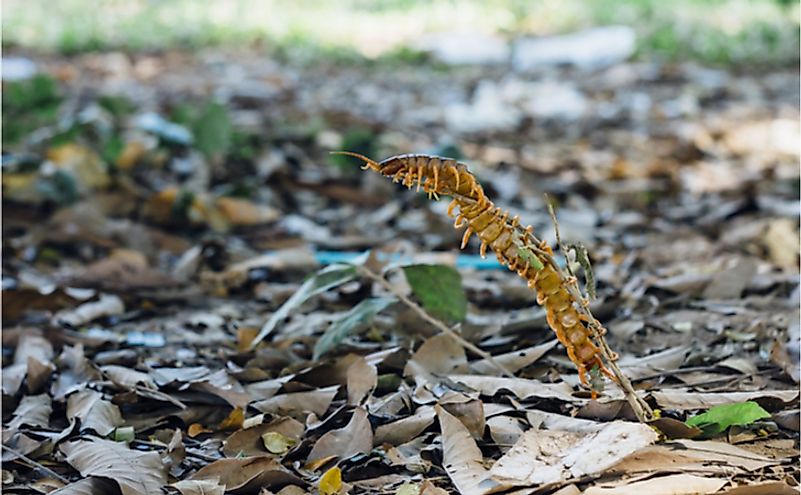 The giant centipede is scientifically known as Scolopendra subspinipes. Its color ranges from red to reddish-brown. The centipede may grow up to 30 cm long and possesses 21 body segments each bearing a pair of legs. The single pair of legs in each body segment differentiates the giant centipede from a millipede which has two pairs of legs per segment. When in danger, centipedes may take off very fast or use their life-threatening bite to scare away the predator. The giant centipede feeds on insects, spiders, scorpions, and small mice. 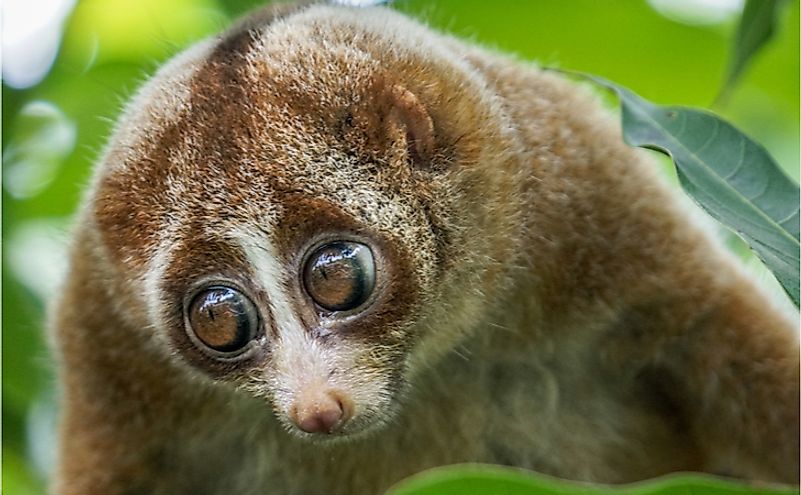 The Pygmy slow loris, scientifically known as Nycticebus pygmaeus, is an arboreal and nocturnal prosimian. It possesses a round head and big eyes with its ears almost covered by fur and hairy coats. These primates live in thick tropical forests and bamboo groves. The pygmy slow loris is an omnivore that has sharp needle-like teeth used to feed on a wide range of food such as soft fruits, gums, shoots, and insects. In some places, though rarely, they are hunted and sold as pets. The slow loris gives birth to 1-2 offsprings after a gestation period of 188 days. The primates can live up to 20 years. 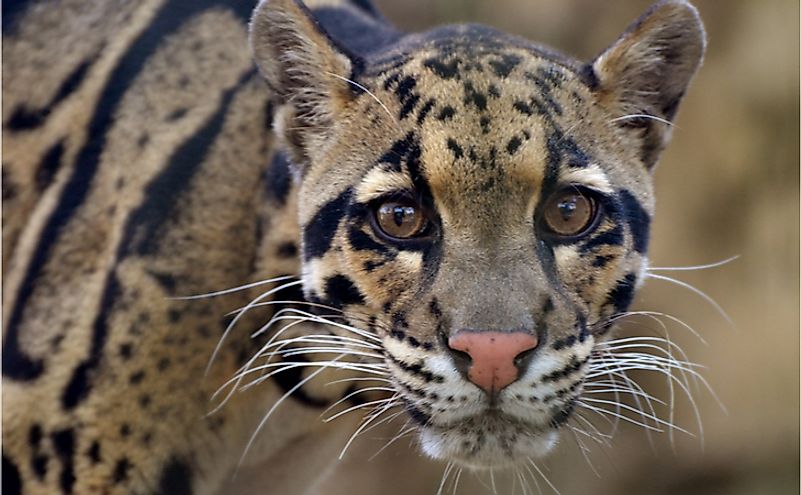 The clouded leopard is scientifically known as Neofelis nebulosa. The name “clouded” was coined from its distinctive skin pattern. A full-grown leopard is between 32 and 48 inches long and would be weighing between 14 and 26 kg. Clouded leopards live in thick forest habitats in Laos. They can climb trees with speed and maneuver quickly through the dense foliage using their long ringed tails for balancing. They are mostly found in the wild in the Nam Et-Phou Louey National Protected Area in northeastern Laos. According to the IUCN Red List, the clouded leopards are categorized as vulnerable. They are threatened by humans who hunt them for their fur, bones, claws, and skull. The clouded leopards are also traded as pets to tourists. 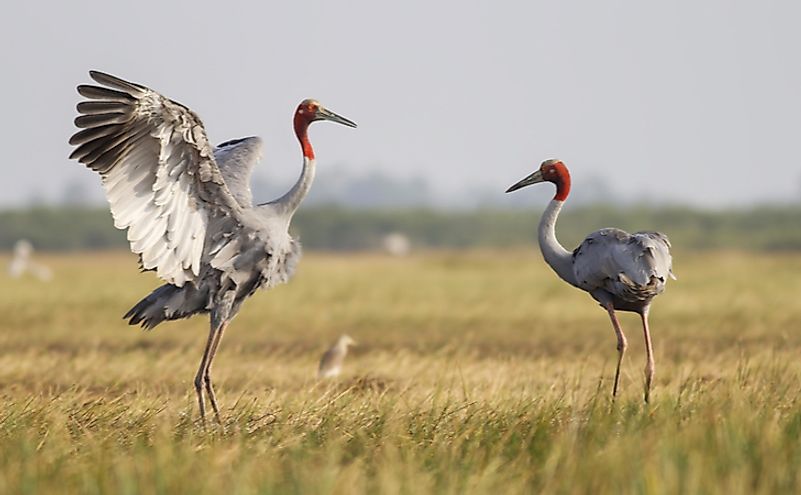 The sarus cranes are scientifically known as Grus antigone sharpii. They are light grey birds with red skin on their heads and necks. The sarus crane is considered the world’s tallest flying birds with a massive wingspan of approximately 2.4 meters. These birds inhabit the Bolaven plateau in Attapeu province in Laos and often feed on insects and crustaceans. Approximately 1000 sarus cranes or less live in the wild today as they are hunted by poachers for their meat and eggs. Besides hunting, these birds are also threatened through the destruction of their habitat. 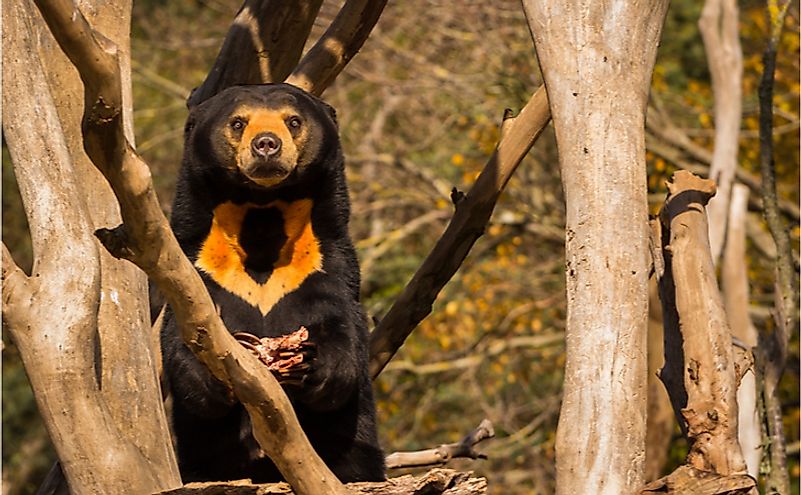 The sun bear, also known as the honey bear, is scientifically known as Helarctos malayanus. The bear has a distinct yellow patch on its chest and face. Sun bears are the world’s smallest species of bears. They grow to lengths of 118 to 150 cm and weigh between 28 and 80 kg. The IUCN Red List categorizes the sun bears as vulnerable. These bears are often hunted for their bile, gall bladder, and other body parts believed to possess medicinal value. To protect the sun bears, the government of Laos created the Tat Kuang Si and Luang Prabang Wildlife Sanctuary.

Spindlehorn is scientifically known as Pseudoryx nghetinhensis. It is one of the rarest mammals on the planet found only in the Annamite Range in Laos. The animal is closely related to cattle, antelopes, and goats with both males and females having horns. Nicknamed the “polite animal” in Lao, spindlehorns are listed among the critically endangered species in the country. Factors that threaten their survival include hunting, habitat destruction, and human encroachment.

The Indochinese Tiger is scientifically known as Panthera tigris corbetti. They are between 8.4 and 9.4 feet long and weigh between 150 and 195 kg. These tigers live in forests, grasslands, mountains, and hills. However, they often live in forests that provide camouflage and a hunting ground that fits their dietary needs. The Indochinese tigers prey on wild pigs, serows, and sambar deers among others. Unfortunately, the population of these tigers is slowly declining since they are hunted for their body parts believed to be of medical value. The body parts are sold in places such as Taiwan where a pair of a tiger’s eyes is believed to fight and cure epilepsy and malaria and can be sold for as much as US$170.As a result, less than 200 Indochinese tigers are existing in the wild today. 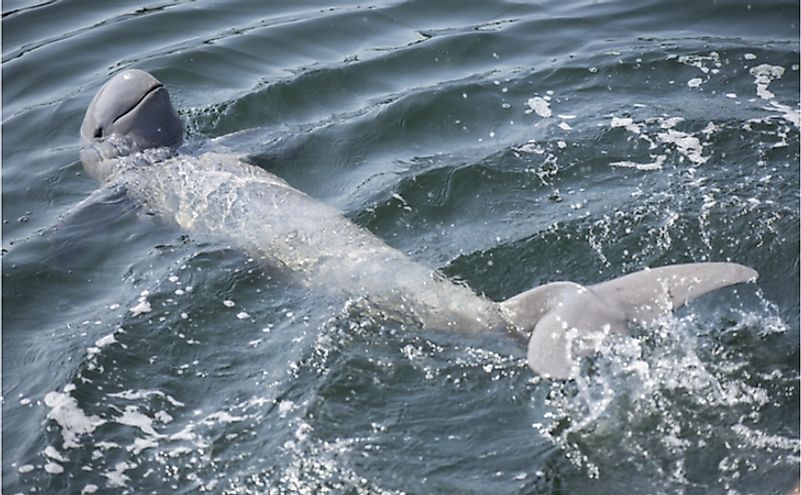 The Irrawaddy dolphin is scientifically known as Orcaella brevirostris. They are native to Mekong River where their current population is only about 75 to 85. Dynamite fishing and gill netting are the major factors that have led to the position of the Irrawaddy dolphins as critically endangered. Irrawaddy dolphins have a bulging head and small dorsal fins. They are dark blue to gray and easily adapt to varied habitats such as estuaries and saltwater bodies. According to the Lao people, these dolphins are reincarnated humans.

This page was last updated on November 22, 2019.
By Sharon Omondi