Lake Maracaibo is the largest lake on the South American continent, and one of the planet's oldest bodies of water.

Geologists report that Maracaibo is one of only a handful of ancient lakes on earth, and it is estimated to be the second oldest; formed nearly 35 million years ago.

This brackish body of water is connected to the Gulf of Venezuela and the Caribbean Sea by a 34 mile (55 km) long strait on its northern edge.

That strait was finally spanned in 1962 when the General Rafael Urdaneta Bridge was completed. That structure (5 mi, 8 km long), is one of the longest bridges in the world, and crossed by an average of 37,000 vehicles each day.

The basin surrounding Lake Maracaibo is one of the major oil-producing areas of the world. Venezuelan crude oil is subsequently shipped through the port city of Maracaibo to dozens of oil-starved nations.

The lake's primary flow of fresh water is from the Catatumbo River.

As a historical note, the "Battle of Lake Maracaibo," fought on the lake on July 24, 1823, was the last (and decisive battle) of the Venezuelan War of Independence from Spain 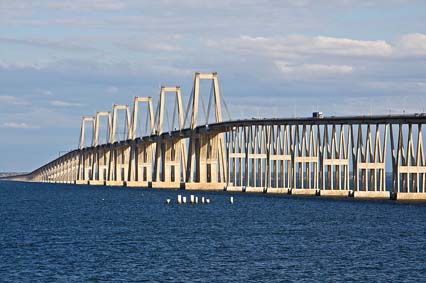