The Kara Sea, an extension of the Arctic Ocean, is located off the coastline of Siberia in far northwestern Russia.

It's separated from the Barents Sea (in the west) by the Kara Strait and Novaya Zemlya - and the Laptev Sea (in the east) by the Taymyr Peninsula and Severnaya Zemlya. The northern border (shown) is a mapping opinion.

Ice-bound for most of the year, the sea is generally navigable only during August and September.

The main ports are Dikson (Dickson) and Novyy Port, and they are heavily used during the two-month (lucrative) fishing season. They will also be distribution points when the petroleum and natural gas discovered here is brought to the surface. 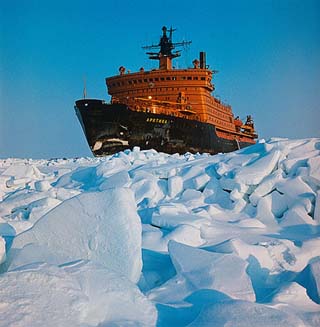 An icebreaker in the Kara Sea...
RIANbot at en.wikipedia.org