The far northern end of the Red Sea is divided into two parts (gulfs) by the Sinai Peninsula; in the west the Gulf of Suez, and in the east the Gulf of Aqaba.

The Gulf of Suez, an important shipping route for oil and other products, lies along the edges of the African country of Egypt and the Sinai Peninsula.

In the north, the manmade Suez Canal provides access to the Mediterranean Sea.

Terrific photo by NASA of the entire Gulf of Suez area 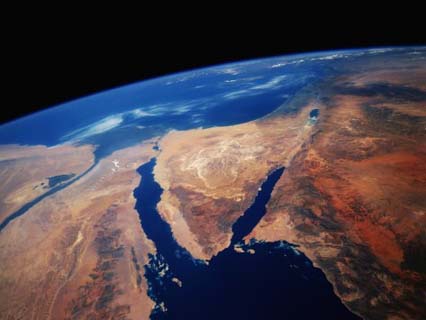 Sinai Peninsula and Gulf of Suez from space...
Buy This at Allposters.com