The Gulf of Aden is an extension of the Indian Ocean. Located between Africa and Asia, it forms the natural separation between the countries of Somalia and Yemen.

Gulf of Aden waters flow into the Red Sea through the Bab el Mandeb (strait), and because it provides an outlet to the west for Persian Gulf Oil, it's now one of the world's busiest shipping lanes.

In that regard, piracy is a major problem in these waters, especially for small sailboats and yachts. Many international sources now warn all small craft to avoid this gulf. Recently, even large tankers have been hijacked and held for ransom.

Terrorism is also a problem. It was here in 2000 that the USS Cole, a U.S. guided missile destroyer, was involved in a suicide bombing attack while harboring in the port of Aden. Seventeen sailors died, with dozens injured. 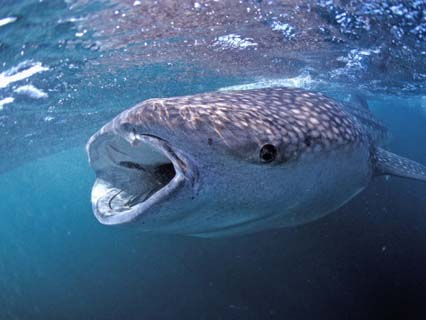 A Whale Shark filter feeds in the waters of the Gulf of Aden...
by Reinhard Dirscherl
Buy This at Allposters.com