print this map
For a larger, easy to read, black and white version, click HERE

Latitude (shown as a horizontal line) is the angular distance, in degrees, minutes, and seconds of a point north or south of the Equator. Lines of latitude are often referred to as parallels.

Longitude (shown as a vertical line) is the angular distance, in degrees, minutes, and seconds, of a point east or west of the Prime (Greenwich) Meridian. Lines of longitude are often referred to as meridians.

If you divide the circumference of the earth (approximately 25,000 miles) by 360 degrees, the distance on the earth's surface for each one degree of latitude or longitude is just over 69 miles, or 111 km. Note: As you move north or south of the equator, the distance between the lines of longitude gets shorter until they actually meet at the poles. At 45 degrees N or S of the equator, one degree of longitude is about 49 miles.

For precision purposes, degrees of longitude and latitude have been divided into minutes (') and seconds ("). There are 60 minutes in each degree. Each minute is divided into 60 seconds. Seconds can be further divided into tenths, hundredths, or even thousandths. For example, our office on Galveston Island, Texas, USA, is located at 29 degrees, 16 minutes, and 22 seconds north of the equator, and 94 degrees, 49 minutes and 46 seconds west of the Prime Meridian.

Another example, our office on Galveston Island, Texas, USA, is located at 29 degrees, 16 minutes, and 22 seconds north of the equator, and 94 degrees, 49 minutes and 46 seconds west of the Prime Meridian.

Relative Location of a city or destination on the planet is its relationship to another place or nearby landmarks.

As an example, our U.S. office is on Galveston Island, located in southeastern Texas in the Gulf of Mexico, about 48 miles southeast of Houston. That's our relative location.

Absolute Location is the definitive location of a place using a recognized coordinate system. In terms of latitude and longitude, our office in Galveston, Texas, is 29°16' North, 94°49' West, marked with the red dot on the map above. To find the absolute location of any destination use the resources shown above, for the relative location of any country, go Here!

Quickly find the latitude and longitude of any street address and for any city, any country, any island, any province, any state, any territory, any town, and for any country code, or zip code worldwide right here! 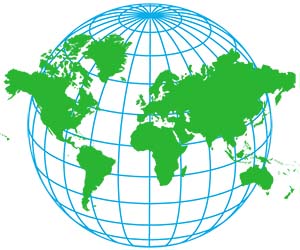