One of the most interesting giant ground drawings (or "geoglyphs") in South America is seen best from an airplane or from a ship several miles out at sea. Etched into a sloping hill on the Paracas Peninsula near Pisco Bay on the Peruvian coast, this somewhat strange figure looks like a candlestick; thus, its modern name "The Candelabra of the Andes."

Etched into the ground to a depth of around 2 feet, and outlined by stones, this mysterious symbol is nearly 600 feet long and can be seen from as far as 12 miles out to sea. Pottery found near the figure has been carbon dated at 200 BC, but no one knows for certain the age of the original carving. 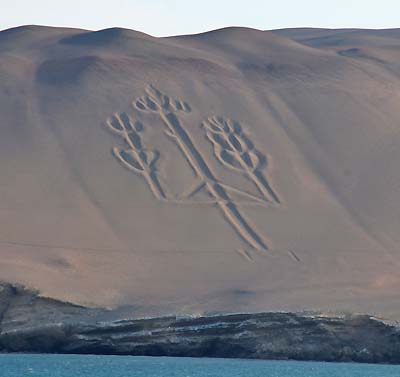 We shot this photo of the Candleabra of the Andes from approximately five miles offshore.

The rugged and beautiful coastline of the Paracas Peninsula, Peru.