Italy is widely known for its volcanoes, both dormant and active. It was here in 79 AD, that Mt. Vesuvius erupted burying thousands in its wake at Herculanium and Pompeii to the southeast of Naples.

Mt Etna on the Island of Sicily erupts now almost daily and over the last few centuries has been responsible for the deaths of over 200,000 people.

Stromboli, one of the most active volcanoes on the planet, one that's erupted almost continuously for the last 2,000 years; it's nearby sister named Volcano last erupted in the late 19th century.

From Naples a local commuter train connects to Sorrento throughout the day; a one hour trip. 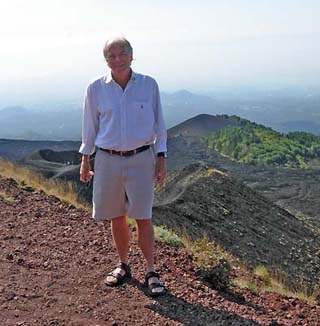 I am standing on one of Mt. Etna's recent lava domes. This volcano is still quite active, and in fact erupts on a regular basis. The last time the map department was there producing a new map of Sicily, we felt two minor explosions. To me, any explosion is one too many.