Cairo, Egypt
Cairo is the capital of Egypt and the largest city in the Arab world and Africa. Located near the Nile Delta, it was founded in 969 AD. Its modern metropolitan area is the 16th largest in the world.

With a 2012 population of 6.76 million, Cairo is by far the largest city in Egypt. With an additional 10 million inhabitants just outside the city, Cairo resides at the center of the largest metropolitan area in Africa and the Arab World as well as the tenth-largest urban area in the world.

Nicknamed "the city of a thousand minarets" for its preponderance of Islamic architecture, Cairo has long been a center of the region's political and cultural life.

Cairo is (as we all know) closely associated with Ancient Egypt as it is close to the ancient cities of Memphis, Giza and Fustat which are near the Great Sphinx and the pyramids of Giza. 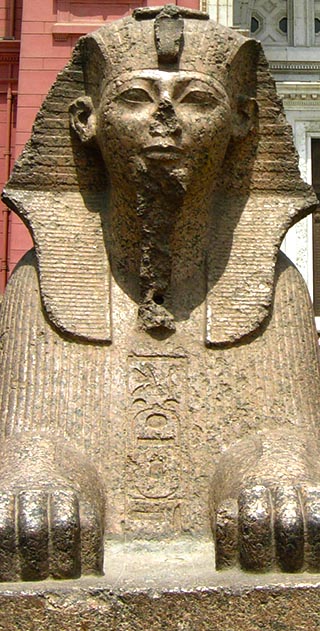 This is an ancient statue in front of the Cairo Museum.

The Pyramids at Giza are guarded 24/7 by policemen in uniform and policemen in plain clothes. In addition, there's a military presence within the complex. 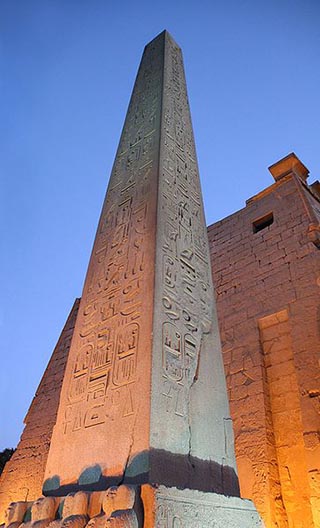 This is one of two famous obelisks still standing at the entrance of the Luxor Temple. The other one is standing at the center of the Place de la Concorde in Paris, France. 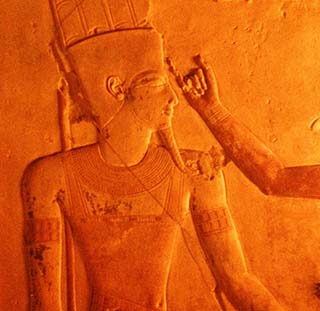 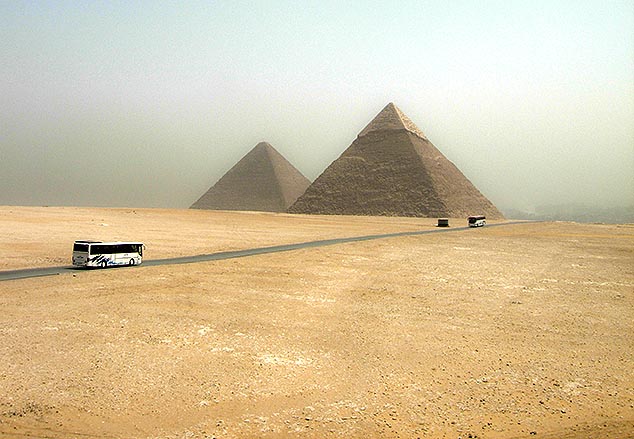 The Pyramids of Giza are an archaeological site on the outskirts of Cairo, Egypt. This complex of ancient monuments includes the three pyramid complexes known as the Great Pyramids, the massive sculpture known as the Great Sphinx, several cemeteries, a workers' village and an industrial complex. It is located some 9 km (5 mi) inland into the desert from the old town of Giza, and buses bring tourists to the site from Cairo. 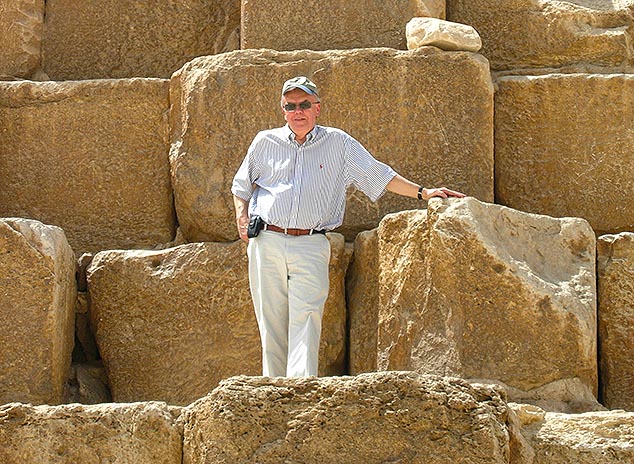 I am standing (with permission) on the Great Pyramid, a massive structure consisting of an estimated 2.3 million limestone blocks with most believed to have been transported from nearby quarries. The largest granite stones in the pyramid, found in the "King's" chamber, weigh 25 to 80 tonnes and were transported from Aswan, more than 800 km away. 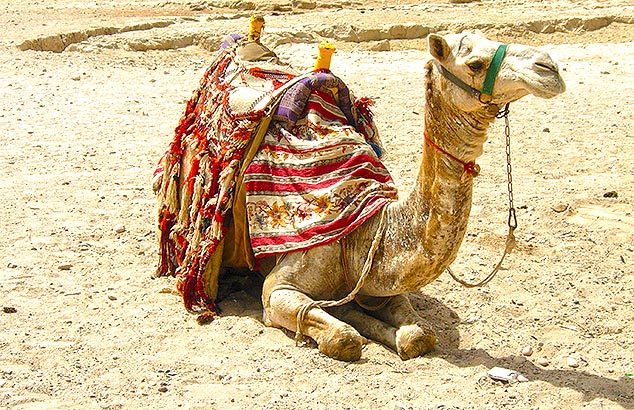 My advice is to avoid succumbing to the temptation of taking an over-priced camel ride around the Pyramids. There are better places in Egypt to take a camel ride, and much safer at that. 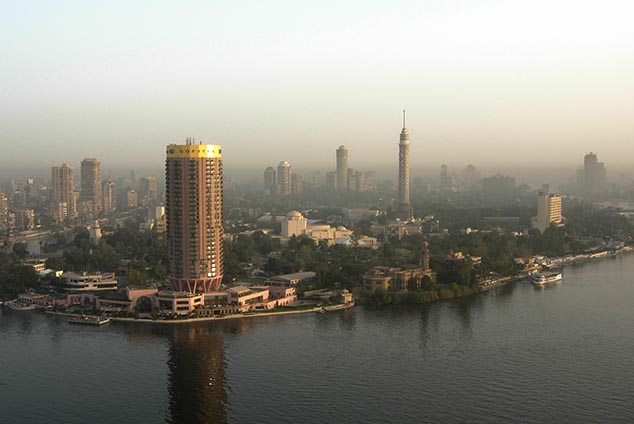 This is an early morning look at Cairo from the 44th floor of the Grand Hyatt. That's Zamalek Island surrounded by the Nile River, with the Gezira Hotel lower left, and the Cairo Tower center right. The Cairo Tower was the tallest structure in Africa for 10 years, until 1971 when it was surpassed by Hillbrow Tower in South Africa. 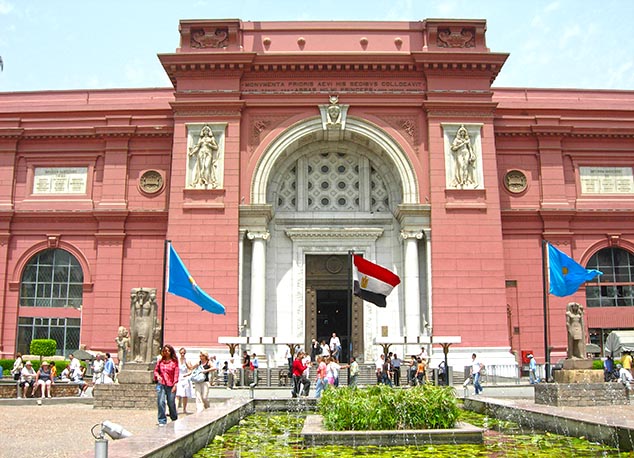 This is the main entrance of the Museum of Egyptian Antiquities, known commonly as the Egyptian Museum of Cairo. It is home to an extensive collection of ancient Egyptian antiquities (120,000 items) with a stunning amount on display. The remains of many famous Pharaohs are stored in this museum; one of those is Pharaoh Ramses III, and for a small fee you can view the mummies. 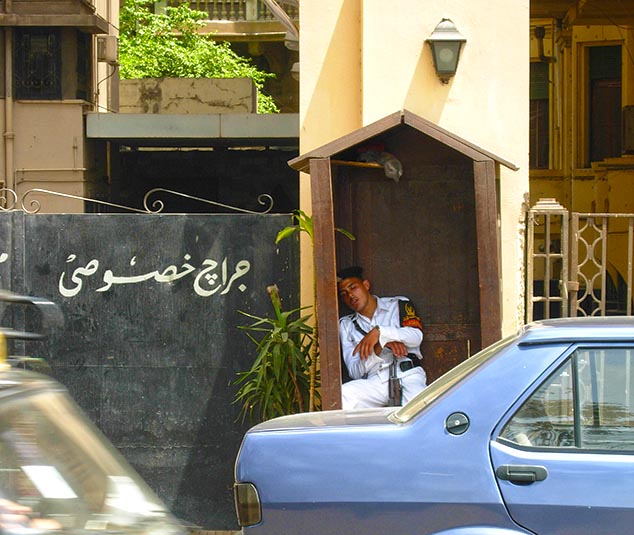 I took this photo during rush hour on a Cairo street, and as you can see the uniformed guard was on the top of his game. 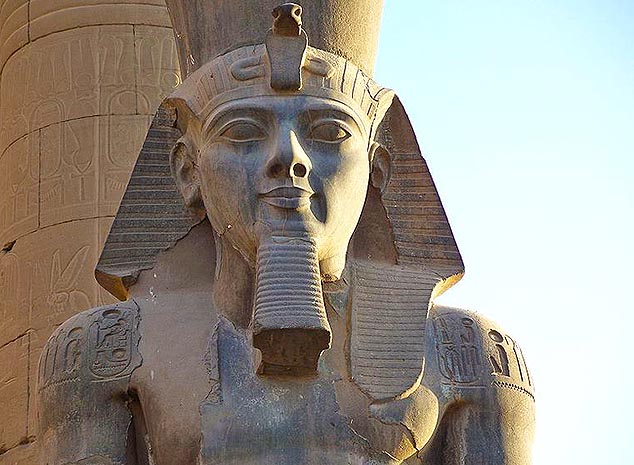 This is a statue called the Ramesses II Colossus, inside the Luxor Temple, Luxor, Egypt. Luxor has frequently been characterized as the "world's greatest open air museum", as the ruins of the temple complexes at Karnak and Luxor stand within the modern city. Immediately opposite, across the River Nile, lie the monuments, temples and tombs on the West Bank Necropolis, which include the Valley of the Kings and Valley of the Queens. Thousands of tourists from all around the world arrive annually to visit these monuments, contributing a large part towards the economy of the city. 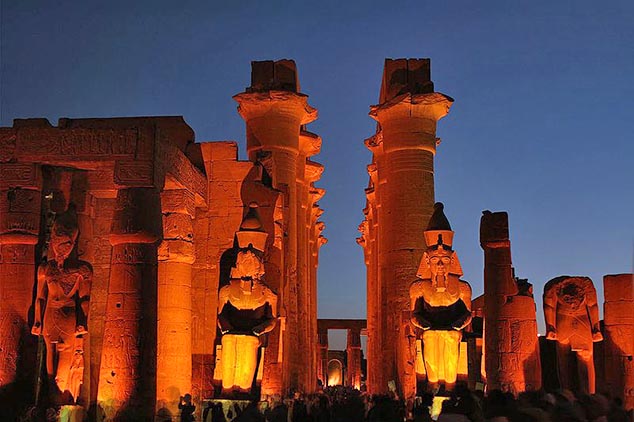 Luxor Temple is a large Ancient Egyptian temple complex located on the east bank of the Nile River in the city today known as Luxor (in ancient times the city was called Thebes). This is the central corridor of the complex at night.