India is a country full of surprises with much to offer to the curious traveler. For example, did you know that India has temples dedicated to rats, dogs, snakes, and even a motorcycle? The Frog Temple is another addition to this quirky list.

The Frog Temple (Medhak Mandir) is located in the small town of Oel Dhakwa in the Lakhimpur Kheri district in the Indian state of Uttar Pradesh (U.P). It can be reached from Lucknow, the capital city of U.P, by traveling from the city towards Lakhimpur and taking a short diversion to the right onto Sitapur-Lakhimpur Road. Although the existence of the temple is known to few outsiders, it holds an extremely special place in the hearts of the locals.

After walking for a short distance through winding alleyways of the town, a small flight of stairs will take you to the entrance of this beautiful temple. A massive statue of a frog is the first object that greets your eyes. The temple is built in accordance with the permutation of Tantra (an esoteric tradition of Hinduism, often associated with secret occult practices). The “garbh grih” (sanctum sanctorum) of the temple is located over a “yantra” (a mystical diagram, usually associated with Tantric practices) that is placed on the back of the frog statue. Locals believe that a mere visit to the temple can bring good fortune to the visitor.

According to local historians, the Frog Temple was built around 200 years back by the then Rajput ruler of Oel, Raja Bakhat Singh. His ancestors hailed from the Neemrana dynasty of Rajasthan. Pradiyumn Narain Dutta Singh, the present-day descendant of Raja Bakhat Singh, informed Times of India that the architecture and spirit of the temple are based on tantrik learnings that bring good luck. The frog is regarded as a symbol of fertility and prosperity.

Although the story of the temple revolves around the frog, the reigning deity in the Frog Temple is Lord Shiva while it is the “Shakti” or “power in the feminine form” (Adi Parashakti is the supreme deity in the Shaktism sect of Hinduism) who prevails over the temple. 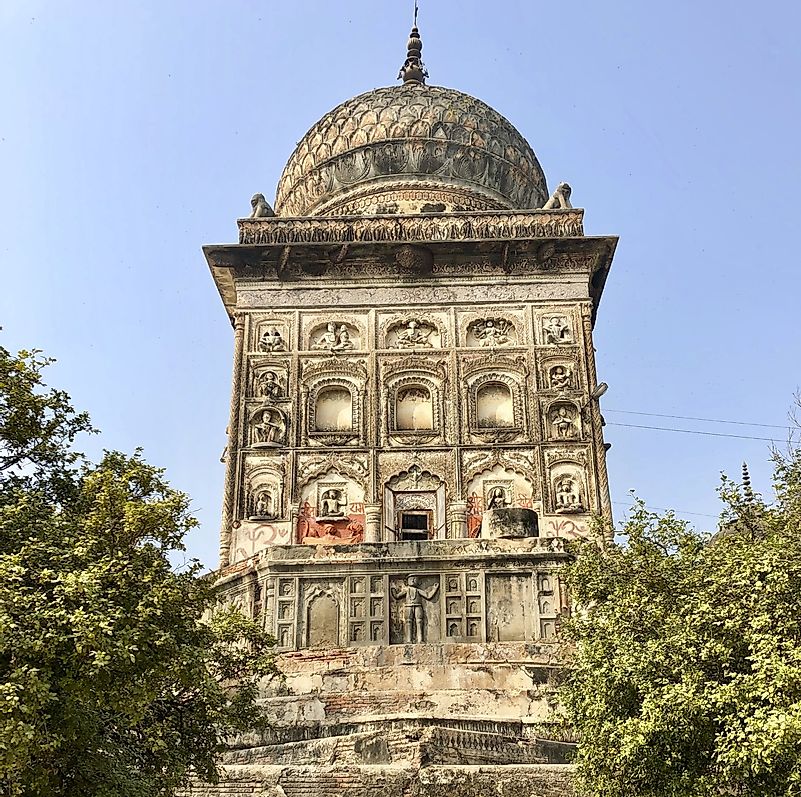 
The architecture of the Frog Temple is fascinating. It has a seven-tiered finial that rises over 100 feet into the sky. Both the exterior and interior walls of the temple, including its four towers built at the four corners, are exquisitely decorated. The exterior walls are studded with sculptures of deities surrounded by floral work on stone. The interior walls are embellished with colorful paintings in vegetable colors. Inside the sanctum sanctorum is the Shiva linga and a Nandi bull statue that is standing (the only standing Nandi in all of India).

The Frog Temple is indeed a hidden gem of India. Thousands of pilgrims flock to the temple on special occasions like Maha Shivratri, Shravan Mondays, and Diwali. However, tourism in the area is still underdeveloped. Given the majestic appearance, unique architecture, and thrilling tales associated with the Frog Temple, it will not be long before it becomes a major tourist spot in the country.