Scientifically known as Didelphis virginiana, the Virginia opossum is the only marsupial found in North America. Marsupials are animals which carry their young in stomach pouches. They have shorter gestation periods due to their yolk-type placenta compared to the placental mammals who experience longer gestation periods. While the placental mammals feed their developing embryos through the mother’s blood as facilitated by the placenta, opossums give birth to live young ones and nourish them in the pouches through the mother’s milk. Other marsupials apart from the Virginia opossums are kangaroos, koalas, and wallabies. 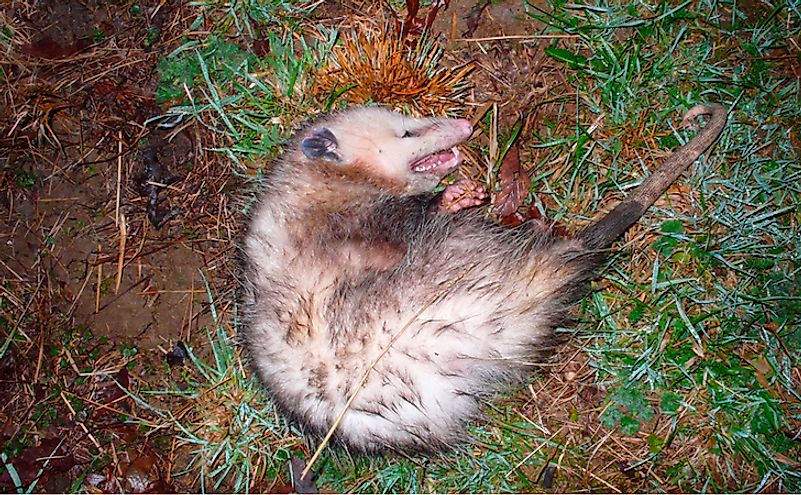 The Virginia opossums are often called opossums or possums. Their fur colors range from white to dull gray to black. The faces of these animals are white. Additionally, they possess long and hairless tails that are used for grasping and holding onto things, as well as for balance and support when moving around trees. These prehensile tails grow up to 9-20 inches long. Opossums are solitary, nocturnal animals who are the size of the domestic cats. The females weigh below 9 pounds whereas the males weigh up to 15 pounds. Additionally, females have 13 nipples; out of which 12 are arranged in a circular manner and one is located at the center. Possums possess 50 teeth. They are omnivores that feed on almost anything including grasses, fruits, snakes, eggs, small rodents, leaves, and snails. One of the interesting behaviors of the possums is their reaction towards predators. In the face of threats, they open their mouth to show off their 50 teeth in the hope that they might scare the predators away. However, if that tactic does not work, they “play dead” or “play possum” which simply means they pretend to be dead. In so doing, they open their mouths wide open exposing their teeth and stick their tongues out until they sense the threat is gone. Then they wake up and waddle off to safety.

Virginia opossums are indigenous to North America. However, besides North America, possums are also found in Central America and along the Pacific Coast. The marsupials are also recently spreading into Canada. Although they usually inhabit forested areas, they can easily adapt to urban and suburban environments. The IUCN Red List indicates that the conservation status of the opossums is Least Concern.

This page was last updated on September 24, 2019.
By Sharon Omondi