Erosion is a natural process that wears away or removes loose particles of soil or rock from the Earth's surface and moves them to another location. The process is caused by three primary natural agents: wind, water, and ice. Each of these three agents is associated with a different type of erosion, namely wind erosion, water erosion, and moving ice erosion. Wind erosion occurs when strong winds blow away soil and rock particles. Water erosion refers to the breakdown and removal of soil or rock particles by water, such as rainfall, waves, and flowing rivers. Moving ice erosion is a long-term process that results from moving glaciers carving away part of the Earth's surface. 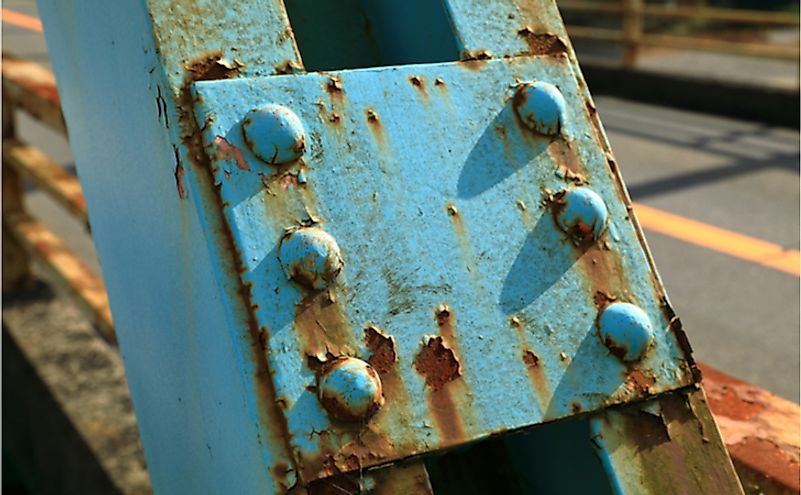 Corrosion is the wasting away of a metal surface through chemical reactions between the metal and its environment. It is an irreversible process that jeopardizes the existence of the metal in the long run. Examples of agents that cause corrosion are sulfates and oxygen. There are four major types of corrosion: general attack, localized, galvanic, and stress cracking. General attack corrosion affects the entire surface of the metal and can be managed by proper planning since it is predictable. On the other hand, localized corrosion affects only portions of a piece of metal, and usually occurs in three forms: pitting, crevice and filiform. Galvanic corrosion occurs when two metals of different galvanic series form an electrolyte, and one loses molecules to the other. Stress cracking results from fatigue or weakened cracks.

Erosion is a physical process and its impact is determined by climate, topography and vegetation cover. Conditions such as hot and dry leaves, bare land surfaces, and loose soil particles make the Earth prone to erosion. For example, heavy rains will increase the extent of erosion, and steep topography speeds up the rate of erosion. Conversely, corrosion is a chemical process involving chemical reactions. All metals corrode but vary in the rate of corrosion due to their level in the galvanic series or their process of modification. For example, stainless steel, which is a combination of iron and other alloys, corrodes slower than pure iron. The rate of corrosion is influenced by the type of metal and environmental conditions. These environmental conditions include pH concentration, salt concentration, oxygen concentration, water velocity, and temperature. Additionally, erosion occurs on land and involves the movement of soil and rock particles from one place to another, whereas corrosion occurs on metal surfaces. Furthermore, erosion involves the mobility of soil or rock particles, while corrosion involves a chemical change of matter that results in pure metal taking up a stable form, such as an oxide.

Management of Erosion and Corrosion

Learn about the difference between weathering and erosion here.

This page was last updated on October 14, 2019.
By Sharon Omondi