Michigan is a US state that is considered part of both the Midwestern and Great Lakes regions. Forests cover about 53% of Michigan, two-thirds of which are privately owned, while the remainder is state or federally owned. These forests provide habitat for a variety of large and small animals, both thriving and endangered. Michigan has a long history of wildlife conservation and is among the US states with the most diverse fauna in the country. The state animal of Michigan is the white-tailed deer, which was officially named a state symbol in 1997. The robin was designated as the official state bird in 1931 and is the oldest animal symbol of Michigan. The painted turtle is the state reptile, while the brook trout is the state fish. The following are animals that inhabit Michigan.

The wolverine is a fierce mammal that inhabits the state's northern forests. The University of Michigan adopted the animal as its official mascot. In the 18th century, the animal was distributed throughout the state, but its population has dwindled to near extinction in Michigan. In 2004 the first sighting of a wolverine in nearly two decades occurred in Ulby. Wolverines were driven out of the state by hunting and habitat destruction. Conservation efforts, including a repopulation program, have helped the animal return to the forests of Michigan. 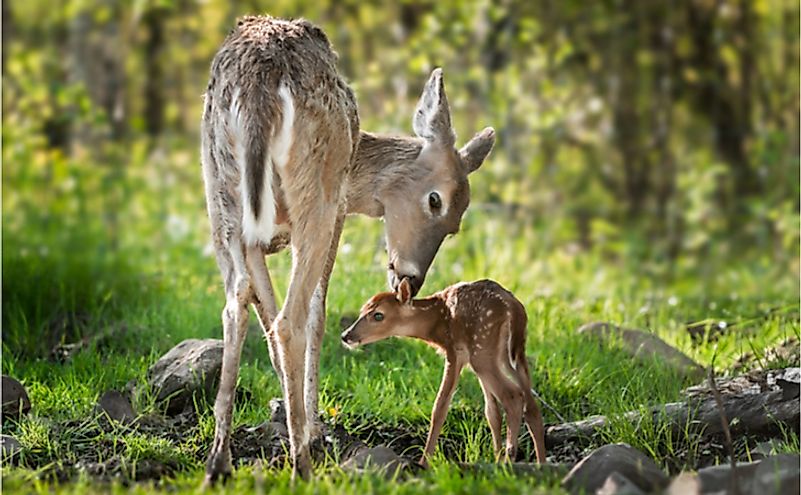 The white-tailed deer is the official state animal of Michigan. It has been a popular species for hunters throughout history, although hunting of the animal has caused it to become threatened. The white-tailed deer was a primary source of meat for the indigenous populations and early Europeans who settled in the Great Lakes region.

Walleye is a popular fish for sport anglers and is an important source of food for people throughout the region. The indigenous Anishinaabe people harvested walleye during spring, as the fish migrated to shallow waters to spawn. Walleyes are found in the Great Lakes, as well as connecting inland rivers and reservoirs.

There are nine species of squirrels in Michigan that vary in habitat preference and size, but many can be found close to human settlements. The species feed on fruits, nuts, eggs, insects, and flowers. The fox, gray, flying, and red squirrels prefer living in trees, while ground squirrels, woodchucks, and chipmunks live in underground burrows. The two largest squirrel species, the gray squirrel and fox squirrel, are most commonly hunted for food.

Cougars are a native species of Michigan but were nearly extinct from the state in the early 1900s. Since the 1950s, the animals were rarely observed in the wild until 2008, when people began reporting their presence once again. Since then, approximately 41 confirmed sightings have occurred across the state, as young male cougars disperse from the Western United States in search of new territory. 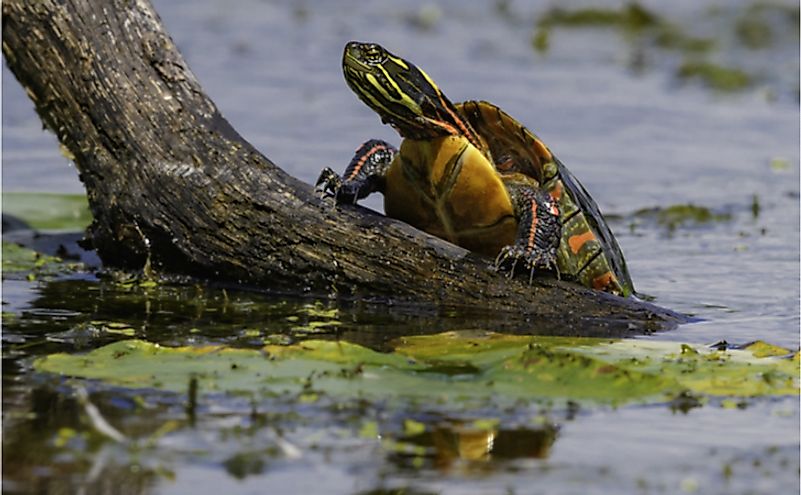 The midland painted turtle is the state reptile of Michigan. It is distinguished by bright red, yellow, or orange stripes across its legs, tail, and head. Its shell is dark green and its underbelly is yellow. The turtle typically inhabits slow-moving permanent waters with abundant plants, but occasionally moves to terrestrial habitats when the need arises.

Monarch butterflies can be found throughout the state of Michigan and other northern US states, but are non-permanent inhabitants. The species occasionally migrate southwards to Mexico, a journey that is completed over four generations since their lifespan is between 4 to 6 weeks. Monarch butterflies help in pollination and create a spectacular sight during late spring, summer, and early autumn.

The gray wolf is one of two wolf species in Michigan, the other being the Eastern wolf. Thirty years ago, the species nearly became extinct within the state, but conservation efforts backed by legislative regulations have helped its population recover. Wolves survive by eating rabbits, rodents, and deer. Thriving populations inhabit parks and forested regions.

Kirtland’s warbler is a songbird and is one of the most threatened species of the wood-warbler family. The shrubs and grasses beneath the jack pine trees of northern Michigan, Wisconsin, and the Canadian province of Ontario are the only places in the world where the Kirtland warbler nests and breeds. The Robin redbreast is the state bird of Michigan. It was designated as the official bird in 1831 and is the oldest state symbol. Early settlers named the robin after a similar species found across Europe. Robins live throughout Michigan and can be observed feeding on earthworms in backyards and suburban lawns.

This page was last updated on November 25, 2019.
By Victor Kiprop