North Carolina is known for a few different things: its large production of sweet potatoes, high waterfalls, the Appalachian Mountains, and  magnificent beaches. Besides all these, North Carolina is also home to some unique animal species. Some of these animals are native to the state whereas others are just popular but not native to it as discussed below;

Scientifically known as Sciurus carolinensis, the eastern gray squirrel is the state mammal of North Carolina. It was declared state mammal in 1969 due to its high population in the state. These squirrels inhabit most parts of the State of Carolina especially the hardwood forests, suburban woodlands, and small parks. They are omnivorous, arboreal, and diurnal diurnals. Some of their predators include humans, hawks, foxes, owls, weasels, and dogs. Regarding their conservation status, the eastern gray squirrels are of Least Concern. The eastern Gray Squirrels were hunted for food during the American Revolution and War of 1812.

Scientifically known as Notropis mekistocholas, the Cape Fear Shiner is a small and yellow fish that possesses black lips. Another characteristic feature of the fish is a black line that runs from the head down to its dorsal fin. The Cape Fear Shiner feeds on algae, bacteria, diatoms, phytoplankton, and detritus. Consequently, its intestines are adapted to digest plants. These fish are endemic to the central regions of North Carolina. However, they can only be found in the Cape Fear River basin. Cape Fear Shiner is critically endangered due to threats to its habitat such as pollution and dam construction by humans.

Scientifically known as Myotis sodalist, the Indiana bat is only found in North American states such as North Carolina, Iowa, Missouri, New Hampshire, and Vermont among others. They inhabit temperate and terrestrial regions. Indiana bat has soft fur and is deep grey or brown in color. It weighs up to 7 grams and measures 35-41 mm in length. These bats are polygamous meaning that one male mates with several females during reproduction. The life span of Indiana bats is 15-20 years. According to the IUCN Red List, the bats are endangered mostly due to habitat loss.

The Cottonmouth is the most dangerous snake in North Carolina as its venom is even more dangerous than that of the copperhead. It mostly inhabits the eastern parts of North Carolina in areas such as the lakes, rivers, and swamps. Scientifically known as Agkistrodon piscivorus, the cottonmouth is semi-aquatic and swims with its head above the water. It is for this reason that the snake is also called the Water Moccasin. Regarding its conservation status, cottonmouth is of Least Concern. 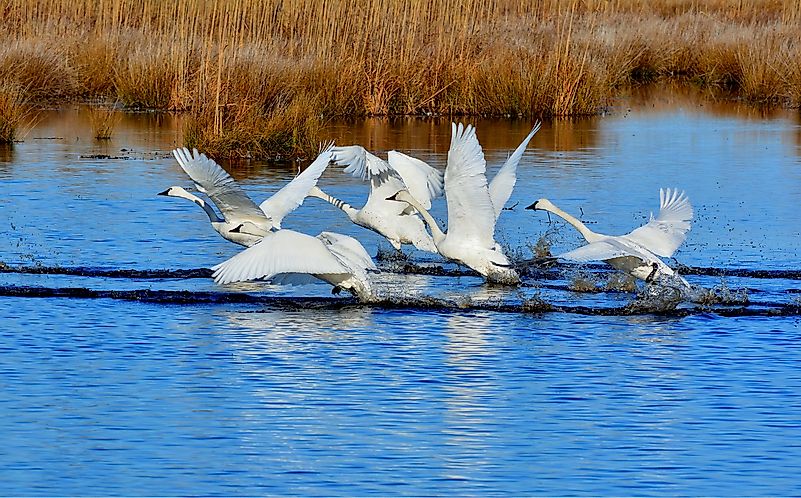 The Tundra Swan is scientifically known as Cygnus columbianus. The swans are elegant, slender neck, and possess all-white feathers. They also have black bills, black feet, and weigh up to 14.4 pounds. Although the tundra swans breed in Canada’s arctic coastal plains and then move to the US coasts such as in North Carolina during winter. Their survival is threatened by human hunting, competition from the Mute swan, and destruction of aquatic plants. Tundra swans have been nicknamed the whistling swans due to their unique calls.

Sand tiger sharks are the largest and most potentially dangerous sharks found in the coastal waters of North Carolina. They grow 6-10.5 feet lengthwise and may weigh up to 350 pounds. These sharks usually inhabit subtropical and temperate waters and feed on rays, smaller sharks, skates, and bony fish. Their populations vary throughout the year with May-October being a time when their numbers are quite high. Sand tiger sharks are categorized as Vulnerable by the IUCN Red List. They are scientifically known as Carcharias taurus. 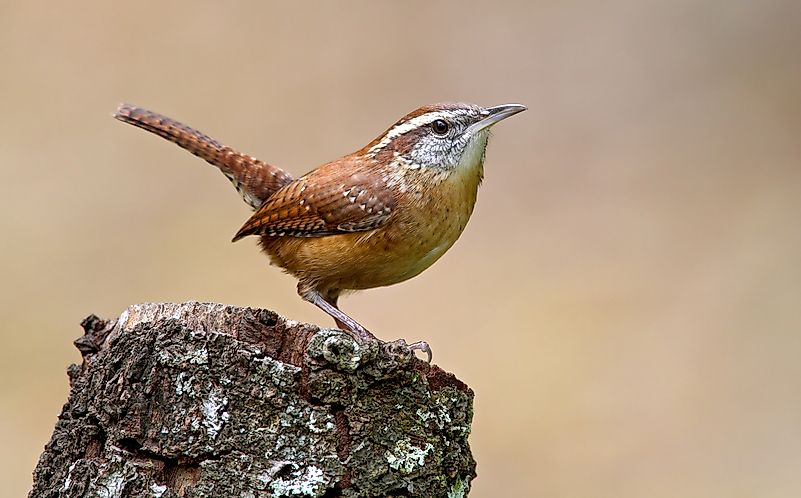 Scientifically known as Thryothorus ludovicianus, the Carolina wren is endemic to the southeastern US which includes North and South Carolina. It is the 2nd largest wren in the US after the cactus wren. This bird weighs 0.63-0.81 pounds and exhibits slight sexual dimorphism as the males are relatively larger than the females. The Carolina wren lives in dense forest covers, suburban areas, and farm edges. They feed on grasshoppers, wasps, small lizards, tree bugs, beetles, bees, and seeds.

The eastern diamondback rattlesnake is scientifically known as Crotalus adamanteus. It is found in the North Carolina coastal plains. This type of rattlesnake is the heaviest snake in the Americas, as well as the largest rattlesnake in the country. It is an excellent swimmer, terrestrial, and may live for approximately 15-20 years. Most times when it is threatened, the venomous eastern diamondback rattlesnake shakes the rattle on its tail. According to the IUCN Red List, the conservation status of the snake is Least Concern.

Scientifically known as Anaxyrus quercicus, the oak toad is among the smallest species of toads in America. It is only 19-33 mm long and is found in the coastal regions of North Carolina. The toad has brown or black spots on its body, as well as a dorsal stripe. It is diurnal which means that it stays awake during the day. Oak toads lay 300-500 eggs in shallow pools during the breeding season. The hatching period of the eggs is 24-36 hours. Regarding their conservation status, the oak toads are of Least Concern. 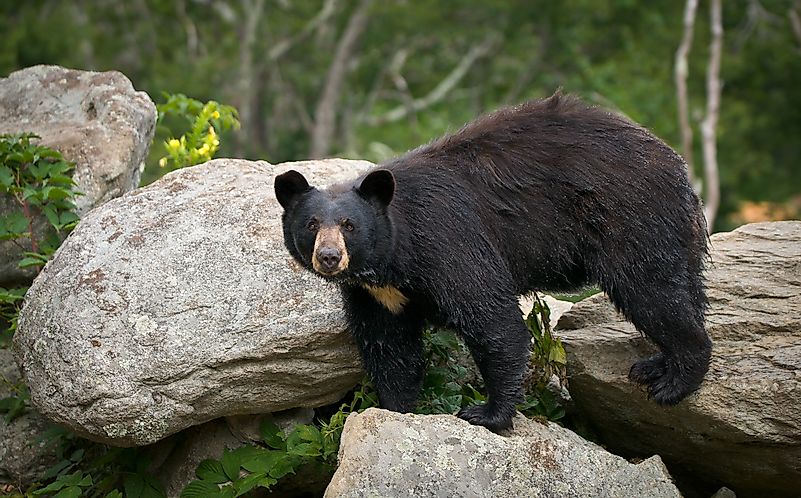 Black bears are the only bear species found in North Carolina. They weigh 300 pounds and are agile tree climbers. Scientifically known as Ursus americanus, these bears live in large forested areas. In most cases, their existence is threatened by habitat loss and hunting by humans. Black bears have a better hearing sense and eyesight compared to that of humans. Additionally, their sense of smell is seven times that of a domestic dog. Black bears have a life span of 18-23 years.

This page was last updated on December 17, 2019.
By Sharon Omondi